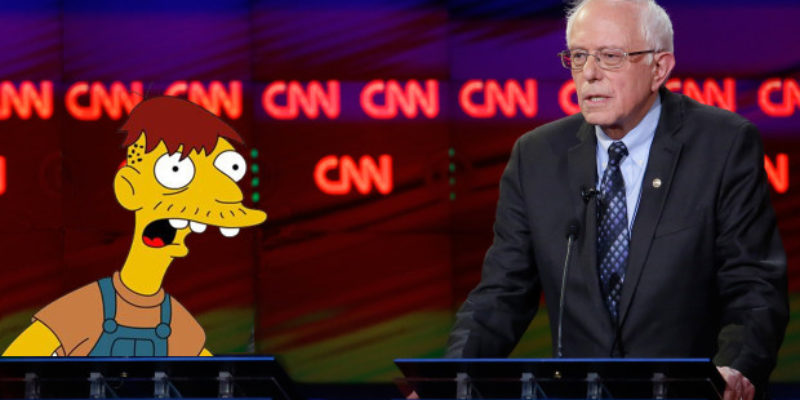 I caught about 40 minutes of it, and then I couldn’t put up with any more. It was time to slip in a few episodes of House of Cards on Netflix.

Essentially, this was a matchup between the two worst candidates left running – and make no mistake, Hillary Clinton and Bernie Sanders are far and away the two worst candidates running; there isn’t an ounce of charm between them, neither one have the first clue about policy and neither one can think on their feet other than to devolve into the most laughable pandering possible. When a question comes, both Sanders and Clinton process it based on what Democrat constituency group the question covers, what promises to that group they’ve already thought of and how best to couch those promises in terms of that group’s perceived grievances might be assuaged by their words.

For people who are not members of the aggrieved group in question, the result of this process comes off as truly bizarre. Here is Bernie Sanders after being asked a question about his “racial blind spots…”

RedState’s Caleb Howe was flabbergasted at this, though one wonders why after so much evidence…

I hardly know where to begin. Democrat racism is so insidious and buried under so much “concern.” Like Wolf Blitzer’s “they’re so poor, and they’re so black” it’s their deep core belief that black people are helpless without a white Democrat to save them.

I mean, we could go on forever about that, but let’s not. What’s really fresh here is Bernie’s suggestion that white people don’t know what it is like to be poor. I assume this is owing to the fact that we get those white people bonus checks every year we remain white. “Still white? Here’s your money,” they say, as you well know.

Although the idea that there are no white people who are poor or who grew up poor does leave some unanswered questions. Like, how is Britney Spears? That’s the whole question, just … how? And what about couches in the yard? How do you explain that? I would also point out the existence of Marlboro Miles. And in conclusion, that singing fish on the wall.

That the debate took place in Flint, Michigan, a failed majority-black city which chased away its middle class – both black and white – and devolved into such a morass of corruption and incompetence that its politicians were unable to provide even the simple governmental function of clean water, was significant. Sanders and Clinton took turns attempting to blame Michigan’s Republican governor for Flint’s water crisis despite the fact that every politician and bureaucrat involved in poisoning the drinking water there was a Democrat, and then promising the federal government would, under their leadership, ride in to the rescue, to such an extent that debate moderator Anderson Cooper couldn’t take it anymore and asked Sanders why anyone should believe the government who ruined the town’s drinking water would be able to fix it.

And Sanders’ response was sarcastic. He blamed all the corporations who “poisoned the water” and took Flint’s jobs to Mexico and then said maybe Wall Street should run Flint…

They have clean water on Wall Street, Bernie. Hate on the fatcats all you want, but their stuff actually works.

Nobody should want to live in a country run by people like this. And historically, nobody does. They have to build walls manned by men with guns to keep people in, something Sanders kept making veiled allusions to doing last night when it came to businesses leaving for friendlier shores.

Interested in more national news? We've got you covered! See More National News
Previous Article The Low Popahirum, March 7, 2016
Next Article VITTER: Let’s Crack Down On Illegals Wiring Money Out Of The Country