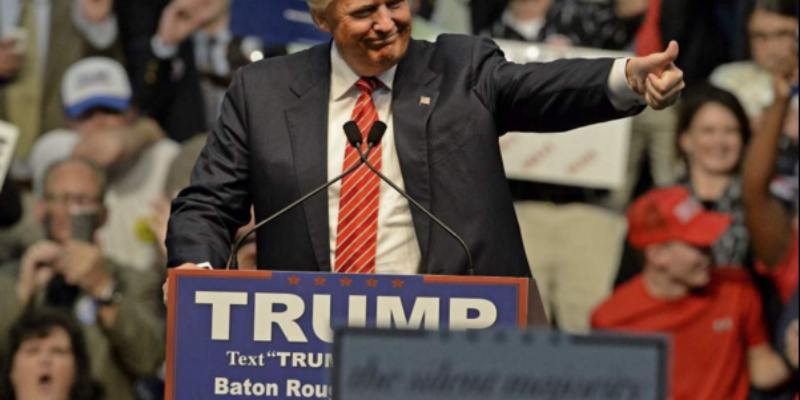 This one comes from the Atlanta-based Trafalgar Group, and it’s a validation of the Hayride-Magellan poll released last night.

You won’t like it if you’re not a Trump fan. The main result… 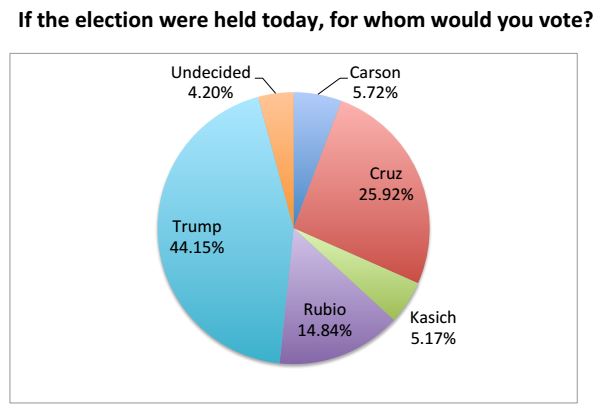 The poll was taken Tuesday and Wednesday, and the respondents were 1,509 likely Republican presidential primary voters. What the pollster said about methodology…

Likely Republican presidential primary voters were selected at random from a list of registered voters based on party participation and registration date. Household ages and locations were extracted as well from this list. In excess of 65,000 households were called over the duration of the poll. Each household participant was asked to opt-in to the survey if they planned to vote in the 2016 Louisiana Republican Presidential Primary.

Using automated voice response technology allows each participant to hear the questions exactly the same way, from the same voice, spoken with the same tone and nuance. Calls are placed to randomly-selected phone numbers through a stratified process that insures approrpiate geographic representation. These calls were placed from 6:00pm to 8:30pm local time on Tuesday, March 1st though Wednesday, March 2nd.

Survey results undergo a weighting process to ensure the sample is comparable to the demographic breakdown of the 2012 Louisiana Republican Presidential Primary. Final results are based on these weights in order to address non-response bias.

The two polls are not good news for Ted Cruz, particularly coming on the heels of Tuesday’s caucus results which should offer real hope to his camp that a victory in Louisiana is possible. Cruz beat Trump among votes for delegates at the caucus by a 45-30 margin, indicating that he’s strong among the most activist voters.

And as my American Spectator column for this week points out, the primary being closed would tend to offer the opportunity to prove a theory that has held so far; namely that Cruz beats Trump when there are no Democrats or other crossover voters to pick the GOP favorite…

Louisiana is therefore a test of the theory that Trump is winning primaries because they’re open to Democrats and Independents invading polling booths in order to “spam” Republican primaries. And in the case of those Democrats, they’re not coming as fresh converts to conservatism; some portion of them, the theory goes, are attempting to sabotage the GOP’s nomination process.

If the theory is true, a closed primary in a supposedly deeply conservative state like Louisiana ought to be tailor-made for Cruz and he should deal Trump a setback in the Sportsman’s Paradise.

But we’ve got two polls which both show a blowout for Trump, and they show that once you get beyond the caucus-goers you run into a mass of Trump voters itching to stick it to the Republican establishment.

The polls weren’t wrong last year when they showed a big lead for John Bel Edwards over David Vitter. There is no reason to think these are wrong, either. If Cruz were to beat Trump it would be a major, major upset; what’s more likely is Saturday’s largest prize will go to a runaway train on its way to the nomination.

And it’s going to happen unless people who told Magellan and Trafalgar that they were supporting Marco Rubio, John Kasich or Ben Carson make a strategic vote for Cruz in order to stop Trump.

Interested in more news from Louisiana? We've got you covered! See More Louisiana News
Previous Article Angelle, Finally, Says He’s Running For Boustany’s House Seat
Next Article What Parishes Do We Need To Keep An Eye On In The Louisiana Republican Primary?