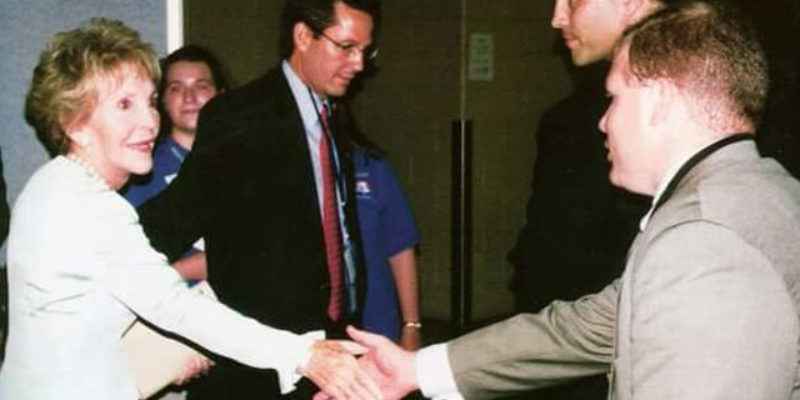 I had the privilege of encountering former First Lady Nancy Reagan at the 2000 Republican National Convention.

She was passing down the same corridor I was walking.  Reagan was escorted by heavy security and on instinct I said hello and stretched out my hand.

The person who took the photograph above could not have done a better job capturing the moment.

Though it is from the view of the back of my head, what I love about the picture is that it shows a security guard trying to pull Mrs. Reagan forward yet there was the 79-year old former First Lady pulling back on the guard, making eye contact with me, and reaching out to shake a young Republican’s hand.

It was the old movie star trying to perform a favor for a member of her admiring public.

The press had never been harder on a first lady than Nancy Reagan.

While she resided in the White House she was referred to as a “dragon lady”.  Upon leaving Washington, Nancy was gossiped about in book form by the likes of Kitty Kelley, with the crass leftist website Wonkette recycling most of that lewd trash in an unkind obituary of sorts on their site.

One area where the First Lady made her mark was the War on Drugs through Reagan’s “Just Say No!” campaign.  Though the campaign had been mocked, I can personally attest that Mrs. Reagan’s personal involvement made an impression on me and many of my classmates.

How many American school children never touched drugs and thus never needed to be extracted from the tangled web of substance addiction due to the First Lady’s high profile effort to encourage kids to reject drugs?

After her appearance on Diff’rent Strokes, Reagan became a peer pressure counter balance to “cool kid” pushers preying on those who were younger.  It was the topic of discussion on my school playground and doubtlessly thousands of others.

“Just Say No!” was simple and effective and probably paid greater societal dividends than any of her fellow First Ladies’ less controversial and comparatively more trivial pet causes.

Three years before I shook Mrs. Reagan’s hand, I had the privilege of meeting her Ronnie.  And the hand I shook in Philadelphia at the 2000 RNC may very well had been the hidden hand responsible for that.

In 1997 I had sent a letter, without any expectation of receiving a reply, to President Reagan’s California office inquiring about the possibility of seeing my hero.

Bear in mind this was three years after the 40th president had announced his Alzheimer’s disease diagnosis to the world and there was not much information about what his condition was since.

Yet a few weeks after I mailed the letter I was astounded when I received a reply from a member of his staff that the president had read my letter and that I was welcome to drop by his office for a visit.

Though President Reagan looked fine, his incapacity was startlingly apparent.  His visits to the office were part of a daily routine where he would spend his day autographing books and pictures.  The door to his office had been removed to allow his staff to observe the former president at all times.

For many years I simply took the word of the president’s assistant that he had in fact read and comprehended the letter and approved the visit, though in light of what I saw that day, I felt it was highly improbable.

After the Gipper went to his eternal reward, I began to wonder if someone else had read and answered my particular piece of “fan mail”.

The more I read about Nancy’s involvement in his affairs, particularly regarding  the planning of his schedule, the more I began to speculate whether the former First Lady was actually responsible and simply wanted her Ronnie to have the credit.  Just as she always did.

Nancy Reagan possessed a trait that is rarely found in her husband’s former professions of politics and entertainment: she moved heaven and earth to ensure somebody else would be loved by the public.

The Hollywood actress was fine playing co-star, with her name in much smaller lettering below her husband’s on the marquee, a remarkable contrast to that of the Clinton political partnership.

Thank you Mrs. Reagan for your contributions to your country, for being a devoted and unselfish wife to your Ronnie, and perhaps for a facilitating a very special appointment to a certain young Republican.