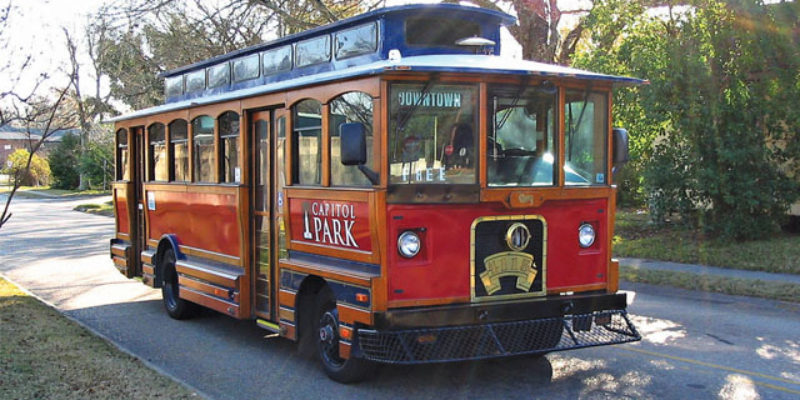 There’s a reason we like this guy. He suggests things which make sense.

There’s a background behind the CATS trolley issue. Specifically, several years ago the left-wing group Together Baton Rouge, which is a branch of the Alinsky-founded and Soros-funded Industrial Areas Foundation, ginned up a movement in Baton Rouge to pass a tax increase to provide some $18 million per year in funding for the Capital Area Transportation System, or CATS, which was rapidly going bankrupt for lack of ridership of its buses.

There was rampant corruption within CATS, and while there were half-hearted efforts to remedy that problem the influx of money into the bus system only made it worse.

And what the $18 million produced was the same empty buses – only more of them. One of which was a “Trolley” line through the tree-lined suburban area known as Mid-City where the houses are mostly worth $250,000 or more and the driveways all have perfectly functional cars in them. The “trolley” is a bus made up to look like a streetcar, but it’s a bus.

Not surprisingly, nobody rides the trolley. Seriously. Six people per day is all that line is carrying.

“The CATS system is a disaster,” Graves says. “It should be blown up and we should start over again.”

Graves, who has made addressing the area’s transportation infrastructure issues and chronic gridlock one of his main priorities, says CATS is part of the problem not the solution. He says the Red Stick Trolley is an example of a failed idea that is wasting taxpayer dollars.

“If they’re dead set on having people drive empty vehicles around, give them scooters,” he says. “It’s beyond a demonstrated failure. Stop bleeding the money and let’s put it in other things.”

Graves lives in the Garden District, which the trolley was created to serve in early 2015, and says he is frustrated on visits home to the district to see the trolley cruising up and down neighborhood streets—almost always without passengers.

Statistics back up Graves’ anecdotal observations, which have been shared by many. In the first two months of 2016, ridership averaged just 176 passengers per month, or about six per day. That’s fewer passengers than the lowest month of 2015, which had 182 passengers. On average, the trolley had about 15 riders per day last year.

CATS’ CEO Bob Mirabito, who last year got a massive raise which was controversial for lots of reasons, some of the subtext of which being that he’s white and most of CATS’ customers are black (don’t ask us, that was clearly why C. Denise Marcelle opposed the raise), says he agrees with Graves – or at least what he would like to believe Graves was saying…

“We agree with Congressman Graves that we don’t want empty buses on our routes,” says CATS CEO Bob Mirabito in a written response to Graves’ comments. “That’s why we are working both to improve the marketing of our services and to make it easier, through House Bill 159, for CATS to change and delete its routes based on ridership.”

HB 159 would allow the CATS board to make route changes and fare increases without having to first seek Metro Council approval.

On one hand, you’d look at the idea that the local gaggle of politicians ought not be able to meddle with bus routes. That’s a degree of political control which would appear rather obnoxious to the operation of a service provider such as CATS is which is supposed to pursue, although it’s understood to be hopeless to do so, a profit.

Then again, CATS loses money hand over fist and survives almost completely on tax revenue. The Metro Council, filled though it may be with entry-level politicians and people not particularly qualified to oversee $18 million per year in public money much less the $900 million they do oversee, is elected to serve as stewards of our tax dollars flowing to local government.

There is no particular reason why the state legislature ought to pass HB 159 and give CATS freedom to rake in those tax dollars and spend them without oversight from the representatives of the taxpayers. None.

Mirabito’s statement is, frankly, offensive. It’s the typical self-serving crap common to the bureaucratic class. Graves suggested Baton Rouge blow up the entire structure of public transportation and experiment with better methods of delivering those services (we suggested subsidized rideshare here at the Hayride years ago), and his response is to centralize more power over those tax dollars within an agency which has demonstrated contempt for the marketplace.

Either way, you can expect that trolley line to end. When the local congressman publicly criticizes it, it’s going to be tough to disregard his opinion – particularly when he’s in position to kibosh federal grants CATS seeks.

Whether Graves’ advice to rethink the entire model of public transportation in Baton Rouge is taken is another story. We do applaud him for speaking out and making sense, though.

Interested in more news from Louisiana? We've got you covered! See More Louisiana News
Previous Article I Won’t Say I Agree With The Suggestion The RNC Ban Trump From The Nomination…
Next Article Now Trump Threatens To Pull Out Of Tonight’s CNN Town Hall