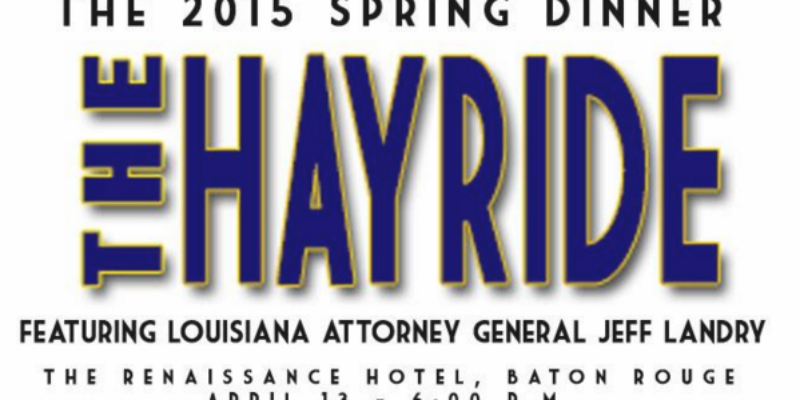 UPDATE AND RE-POST: We’ve rescheduled the Hayride Spring Dinner to April 13 in order to avoid a conflict with the annual LOGA/ABC legislative reception scheduled on the 5th. So mark that date down on your calendar and click here to register.

We’ll be throwing a steak dinner at the Renaissance Hotel in Baton Rouge on Wednesday, April 13 at 6 p.m., and the headline speaker will be Louisiana’s new Attorney General Jeff Landry. All the cool people will be there, and you should be, too.

We’ve been wanting for some time to attach The Hayride’s name to an annual event, and we’re now taking the plunge and doing it. Hopefully we’ll be able to make this into an annual event and maybe even grow it beyond just a banquet – Louisiana could use an annual conservative shindig, and perhaps this might be it.

Tickets are $80. For a ticket that includes the VIP reception and a chance to meet the Attorney General, it’s $200. And we have sponsorship opportunities available; they’re $2500 each.

And here’s why, beyond just having a fun night and mixing with the swells, you should participate in this awesome spectacle.

First, last year most of our readers would probably agree we did everything possible to get the word out about John Bel Edwards and what was coming were he to get elected. And our traffic was at or near historical highs throughout that campaign.

But while the conservative perspective this site offered made perhaps a little dent as the public saw an alternative to the dead-tree media’s usual fare, it obviously wasn’t enough. People bought into the idiotic Honor Code narrative Edwards’ campaign spun out there, and a major reason for it was the coverage the race received. Newspapers and TV stations around the state spent most of the campaign trying to hound David Vitter about hookers and by Election Day virtually nobody knew that Edwards had never, in eight years in the state legislature, voted against a tax increase, as an example.

And we’ve had people tell us since then something that we’ve long known was true and that is the case for virtually every conservative news site – we simply don’t have a big enough megaphone.

But there’s a workaround available to us for that, and it’s this: people get their news mostly on the internet these days, and it goes even further than that. The overwhelming trend seems to be that it isn’t even the internet; people don’t just go to the New York Times’ front page so much anymore as they’ll follow it on Twitter and Facebook and then catch links to stories posted by the Times on social media.

Facebook, in particular, seems to be the major aggregator of news for people in Louisiana. We see that clearly in our own experience. Just yesterday, for example, this site had 16,915 page views, and 11,062 of them – 65 percent – came from people clicking on links to our content posted on Facebook – either at The Hayride’s Facebook page or by our readers in their own threads.

That’s powerful stuff, and it’s where the workaround comes from. Our Facebook following is pretty small, considering, mostly because we haven’t spent any money growing it. The Hayride’s Facebook page only has, as of this posting, 6,397 “likes.” By comparison, late last week when we did a quick study of Facebook pages of other media outlets around the state here’s what we came back with in terms of how many “likes” they have…

Obviously, compared to TV stations and newspapers around the state there’s a megaphone issue. When those guys decide to act like stenographers for the Louisiana Democrat Party and elections get covered as opportunities to talk about hookers and legislative sessions as opportunities to spread stupid threats like there won’t be college football in the fall if your taxes don’t go up in the spring, lots of people are going to believe it because they won’t hear anything else.

But if there’s a conservative outlet pushing back against those kinds of narratives, maybe it gets harder to embed them in people’s minds and maybe we get a little less leviathan government as an end result.

So we’re trying to put together a budget to do Facebook ads and grow The Hayride’s Facebook page. The goal for this year is 100,000 likes – so we’ve got 93,600 to go. Social media experts we’ve talked to tell us that $50,000 would get us there, and therefore that’s what we’re looking to raise. The spring dinner is a project to put some of that funding together.

Plus, like we said above we need a conservative shindig in Louisiana.

So that’s the event. Once again, click here and get your ticket! We’ll see you at the Renaissance on April 13!