That one-cent sales tax hike that was supposed to last for 18 months?

Yeah, that was the House version. Now it’s a five-year sales tax hike, thanks to the Louisiana Senate and the 29-10 vote it just subjected the public to. The bill was amended thanks to a proposal from Sen. J.P. Morrell, who comes from a New Orleans district that mostly consists of poor people who will be disproportionately hit by a sales tax increase, that the Senate adopted before passing the tax increase.

Here was the vote… 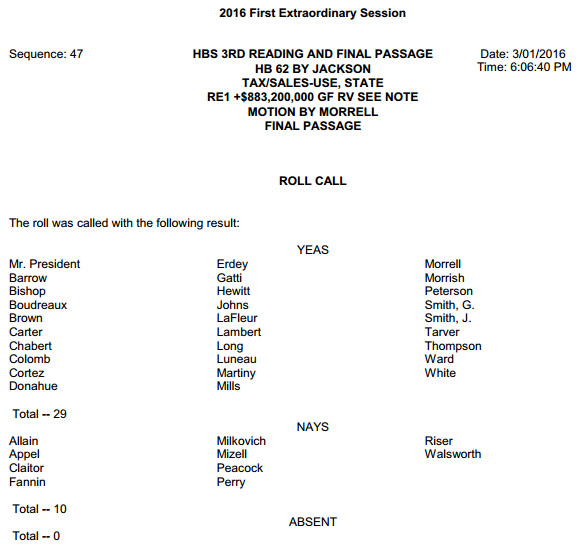 The 10 Nays are the 10 members of the state Senate who can call themselves fiscal conservatives. Everybody else? They’re sheep, and they care more about the state government than they care about their constituents.

And the Republicans who voted for that sales tax increase just voted to take tax increases off the table as an election issue in 2019. They just voted to give John Bel Edwards a pass for lying to the people of Louisiana. They did it because they also want to get a pass in 2019 for having lied to their constituents about tax increases.

Just keep that in mind.

The bill will now go to a conference committee, and we’ll find out how hard the House will be willing to fight for the version of the bill it passed, in which the tax hike expires after next year and is seen as an emergency measure in order to give the legislature time to reform state spending. We know that the Senate is worthless; that conference committee will indicate whether the House is serious about fighting tax-and-spend policies.

UPDATE: Jeff Sadow notes that the House has a golden opportunity to put a stop to this idiocy if it’s willing to show some sand in the conference committee negotiations…

As a sop to try to convince the House to go along, the Senate inserted a clause that reduces the increase in quarter increments for a fiscal year if the Revenue Estimating Conference certifies prior to each regular session that revenues from other sources have made up a quarter or more of the estimated proceeds from the hike from this year’s baseline total of forecast general fund revenues. But this sleight of hand does nothing to reduce the size of government; it deems current expenditure levels acceptable and does not eliminate the possibility that other kinds of tax increases can substitute in to keep spending higher than appropriate.

Therefore, the House must reject this red herring and insist upon a 26-month deadline, keeping the de-escalation clause if it likes. It has the leverage to do so, in that it has sent forward a bill that would make deeper cuts to spending that Edwards wants and it holds three other revenue-raising bills that would raise about a fifth of the HB 62 total. It could promise not to act further on the cuts bill and pass the others in exchange for limiting HB 62’s effective period.

And it does hold all of the cards here. Assuming HB 62’s passage in its current form, the state still lacks around $200 million to close the gap. As the regular session disallows considering almost all tax measures and timing would permit little time to call another special session before fiscal year’s end, the only options left would be cuts made by the Legislature and Edwards. Do the Senate and Edwards really want to enforce such cuts just because they hold out to keep a tax going longer? Voters almost certainly will blame them before House members that tried to hold the line on taxes, and to rub salt in their wounds they will have failed partially in their plan to retain bigger government than necessary.

Usually when two of three of the governor, Senate, and House come into conflict with the one other, the united pair wins. However, given the dynamics of this situation, if the House (essentially, House Republicans) stands firm, they can prevent higher taxes from sticking around longer than needed and in the process begin the process of trimming Louisiana government to an appropriate level; if not immediately because of the extreme times, at least in the near future.