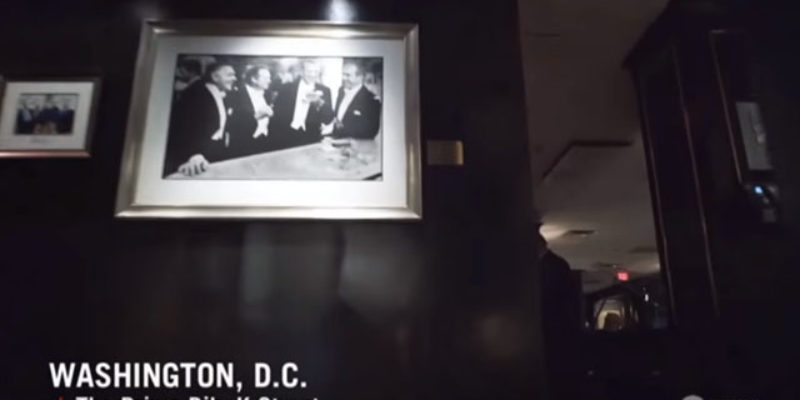 I’m bringing this up because I talk about it in my most recent American Spectator column which is out today (and yes, I’m double-dipping with references to it having linked it in The Battlefield earlier), but also because it’s worthy of its own post.

If you haven’t been watching The Circus, the weekly documentary series starring political consultant Mark McKinnon and Bloomberg Politics reporter Mark Halperin, it might be worth your time. The Circus follows the campaign trail in both Republican and Democrat primaries each week, trying to get a finger on the pulse of the election.

And last week’s show had a scene in it which got a little bit of play on the cable news circuit. I gave it a serviceable introduction at the American Spectator…

Already, a gaggle of Washington movers and shakers advertised as having vetted Republican candidates for decades had agreed to appear on Showtime’s political reality series The Circus at The Prime Rib, a tony K Street steakhouse, to discuss their alarm at the Trump phenomenon, with the results playing out all over cable news. The three-minute video segment of such long-time establishmentarians as former Republican National Committee chair Mike Duncan, former Congressman Vin Weber, and GOP pollster and McCain adviser Ed Goeas complaining about Trump and telegraphing their efforts to torpedo his campaign is dumbfounding in its tone-deafness and breathtaking in its snooty arrogance.

“He’s not articulate, he’s not poised, he’s not informed,” complains former Reagan and Bush advisor Ed Rogers, currently partners with former Mississippi governor and ex-RNC chair Haley Barbour in the prominent K Street lobbying firm BGR. “All he has going for him is a lot of votes.”

I summed this all up in the column under the headline The Stupid Party. I stand by that. The Republican Party is a political party for people who suck at politics.

Interested in more national news? We've got you covered! See More National News
Previous Article The Battlefield, March 18, 2016 – White Poverty And White Trash
Next Article How Much Funny Business Is There With Edwards’ Budget Projections?