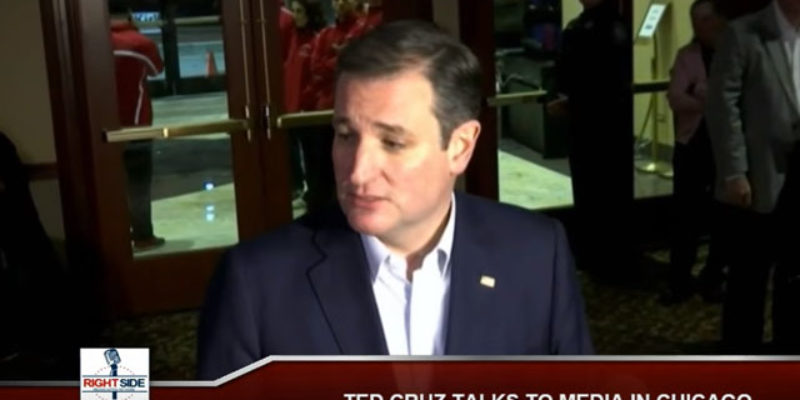 We have a few video clips to show you. One is a relatively short one from Ted Cruz and the other is a bit longer one from Marco Rubio.

On social media is what looks like a hurricane of outrage that both of them “blamed the victim” in decrying Trump’s “punch him in the face” rhetoric about protestors to his rallies. That isn’t quite what either did, though Rubio’s statement was certainly a lot stronger in criticizing Trump than Cruz’ was.

Both took the position that conservatives don’t engage in political violence. Conservatism is borne of reason and places its faith in a sober, calm, rational intellectual debate. It’s leftism which aims to stir passions and create chaos and crisis. And therefore a conservative leader doesn’t fuel the passions of his followers and set them on his opponents.

But on the other hand it’s at Trump’s rallies where this is going on. It’s his rallies which are being disrupted.

And this was Rubio’s press conference Saturday morning. It’s 13 minutes of fairly well-reasoned criticism of how Trump conducts himself…

For his part Trump rejected the criticism of what’s happening at his rallies and puts the responsibility on the Left for them – and specifically he’s blaming Bernie Sanders for sending protestors in, and the media for what he says is overpublicizing the problem…

As we said last week, the fact is the Left is sending people into Trump rallies to cause trouble.

Trump makes himself an easy target, to be sure. He said last year that if #BlackLivesMatter protestors came to his event he’d fight them, and he’s told his people he’d pay the legal fees of anyone who fought the protestors. He might think he’s just defending his fans from losers and scumbags who are trying to disrupt their First Amendment right to peaceable assembly, but while the sentiment is understandable the methodology doesn’t work well. Leadership requires the attempt to inspire your people to rise above those disruptions.

And now Trump is threatening to send his people into Bernie Sanders’ rallies to disrupt them, which would turn America into Weimar Germany where the Nazis and Communists would beat each other bloody in the streets while decent people, the majority of the public, withdrew from politics in horror. We saw how well that worked out.

That’s what Cruz and Rubio are yelling about.

But what both should be more vociferous in decrying is the organized mobs trying to disrupt those Trump rallies. Whether Trump is an easy target or not, #BlackLivesMatter, MoveOn.org and other poisonous groups funded by left-wing billionaires are invading his events and causing violence that would not exist without their efforts.

And if Cruz were to overtake Trump and become the GOP nominee there is every reason to believe he’ll become the victim of that disruption. To date he’s treated hecklers politely – he invites them down to the front of the room and engages in discussions with them, some of which has made for good entertainment given that your average heckler at a political event is no debate champion. That works well against onesies and twosies, but it’s not a workable strategy against two dozen professional agitators. They’re not going to engage in a debate; they’re there to provoke violence and make the candidate look bad.

And Cruz needs to get ahead of that for his own sake, because when he attacks Trump for his rough-and-tumble rhetoric he’s not wrong – but when the time comes that the Left sends goons to Cruz events and he gets the same treatment without actually doing anything wrong, it’s going to be doubly disruptive.