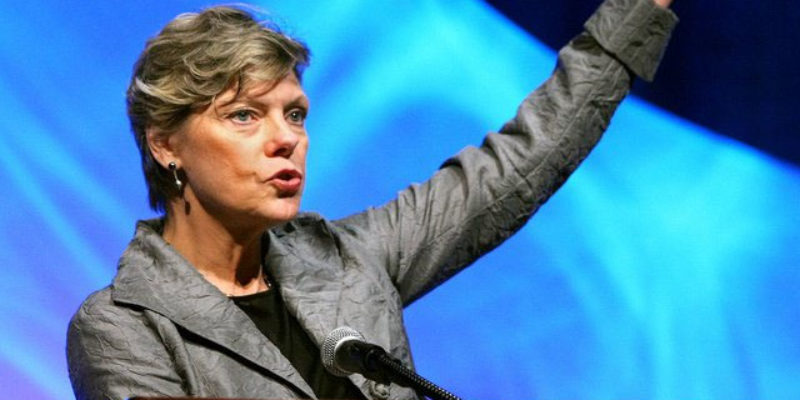 This is a video clip which makes Donald Trump look like a totally reasonable adult in the room.

There is no defense for some of the things that have happened at Trump’s rallies. By now most of our readers have surely seen this clip from an event in Fayetteville, North Carolina…

The idiot who threw that punch, and who somehow wasn’t immediately arrested, then went on camera and said something absolutely appalling…

He did get charged with assault later, for which we should all be thankful.

We’re not even going to delve into the Michelle Fields incident, because that’s a long post in its own right.

But here’s the thing – if Cokie Roberts and a lot of the other media doyens think that making a big deal over the thuggery at Trump rallies is going to get them anywhere, they’re barking up the wrong tree. And that interrogation of Trump in the first clip above was so unprofessional and stupid that it only builds sympathy for him.

Look, we shouldn’t want anybody to get physically abused at a Trump rally or anywhere else within our political process. That said, if you think that violence isn’t being provoked – and NOT by Trump – you have your head in the sand.

#BlackLivesMatter is sending people in to Trump rallies to agitate and disrupt them. They’re trying as hard as they can to foment racial strife, and they think they can paint Trump supporters as violent racists if they just act obnoxiously enough. And in a few cases, particularly since Trump has made it very clear he has no tolerance at all for any of those people attempting to disrupt his rallies and has made some pretty irresponsible statements in that regard, they’ve hit paydirt and provoked the pushing, shoving and punching they’re trying to elicit.

This isn’t to absolve Trump, who if he’s to be a serious presidential candidate has got to clean this situation up (more campaign events in smaller settings with far tighter security would be one way to approach the problem; that is, after all, how Hillary Clinton does it), but he’s not the cause of the problem.

Guess who’s going to suffer most from it, though.

This is a budding disaster for Hillary, or whoever the Democrat nominee is in the event she gets indicted. Because at some point the majority of the country, which has already absolutely had it with the #BlackLivesMatter mob, is going to notice what they’re doing and will turn on them. Hard.

That’s not to say there will be more punches thrown, though that’s entirely within the realm of possibility. In fact it’s likely, and it’s a bit of a surprise it hasn’t happened at a Cruz rally yet. But what’s very likely to happen is that the Democrat will get blamed for siccing these people on the Republican, and having the #BlackLivesMatter agenda in their pocket as a post-election payoff.

You do not want, if you’re the Democrat nominee, to be tied to #BlackLivesMatter. Not with the recent spate of cops being shot, not in the aftermath of Ferguson and Baltimore and whatever is coming next and not when it’s exposed what these people actually want – like a national emphasis on Afrocentric public education, for example, or ending “environmental racism.”

Democrats need 90 percent of the black vote and better-than-normal turnout in the black community. So far, pandering to #BlackLivesMatter has opened the door for the #BlackLivesMatter agenda to become the black community’s agenda, at least in a lot of the urban centers where an increasingly radicalized racial politics has taken hold and where the Democrats have to have full production from their vote farms. But it’s not a mainstream agenda, and the more prominent it becomes within the Democrat Party the more independents and soft Democrat voters are going to run from it.

This wasn’t a problem when Barack Obama was the nominee. Obama could live on pure identity politics and get maximum black turnout, and then make noises to white liberals and independent voters soft enough to survive against bad Republican candidates. But that’s due to the fact Obama is black. Hillary Clinton is not, and neither is Bernie Sanders (or Joe Biden, should it come to that).

It would be a smart thing for the Democrats to rein in the #BlackLivesMatter people now. They might think that sending protestors into Trump events to take a beating is somehow the next great civil rights struggle, but they’re wrong. The unpleasantness won’t help Trump, but it won’t hurt him either – because #BlackLivesMatter is a lot more unpopular than Trump is.

And since the public can see what’s happening, the browbeating from the Cokie Robertses of the world is worse than useless. In fact, she’s so clearly past her prime that we’d all be better off if she were to just be quiet. Rhetorical assaults disguised as questions like that which she laid on Trump do nothing to further the cause of American democracy, and they’re obviously designed to paint Trump and his followers as racists per the Democrats’ worn-out playbook.

Nobody’s listening much anymore. Let’s move on from this. Trump will either win or lose on his own merits relative to those around him, but ginned-up racial strife for electoral purposes is last cycle’s ploy.