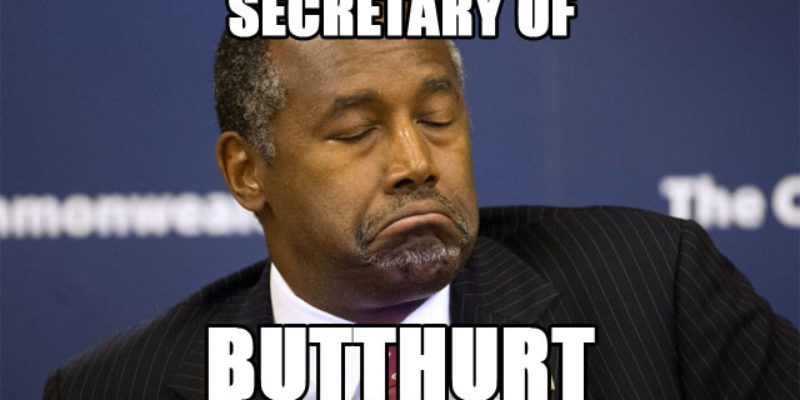 Carson is endorsing Donald Trump today, which isn’t a surprise – he’s given lots of hints about doing so over the last few days, and since Trump stole Carson’s thunder and announced the endorsement during the debate last night it’s a bit anticlimactic to even throw a dog-and-pony show over it.

I tried to explain to Carson supporters numerous times why I thought Ben Carson was a fraud. At two separate non-profit events to honor troops, prior to Carson running, he spent more time talking about himself than the soldiers.

He had a bunch of hucksters and scam PAC’s start raising money off his name trying to get him to run for President. Instead of distancing himself from them, he put them on the payroll.

He started making wholesale shifts in positions, including on guns.

When his campaign formally kicked off, he was surrounded by the dregs of political society who were notorious for bleeding campaigns of commissions while watching the candidates lose. His campaign lived up to that.

I refused to invite him to the RedState Gathering, despite much protest, because I felt strongly he was a fraud, in it for himself, and happy to make a buck.

A month or so after the Gathering, his supporters and his own debate performance convinced me I needed to give him a second look. It looked like he really did want to be a contender and not just profit from the system. His supporters were genuinely kind people and, throughout the last six months on my radio show, have been far more hostile to Donald Trump than Cruz supporters. Carson’s supporters wanted a good man of faith they could respect. They found Ben Carson to be that man.

But no. Carson turns out to be the man I always suspected he was — a fraud on a book tour out to boost his ego and bottom line.

He whined on the campaign trail about incivility in politics, so he is endorsing the man who compared him to a child molester.

We all know why Carson is going with Trump. He’s doing it because of that business in Iowa.

The thing you need to understand about the Carson campaign is that the people who were on board with him from the start had come to the realization that by Christmas Carson was played-out as a presidential candidate. He lacked a sufficient voting base, he hadn’t performed well in the debates, he didn’t have any issues on which his particular expertise was a draw, his campaign organization was insufficient to achieve status as a first-tier candidate and his messaging was weak. To be sure, Carson’s best moments in this cycle came when he attacked political correctness; voters primarily concerned about that issue had already migrated to Trump before the primary process began.

So Carson jettisoned a large chunk of his campaign inner circle and brought in some new people who were determined to milk every last dime out of him they could. And the best way for a political consultant to milk a candidate dry is to tell him exactly what he wants to hear.

And they did. They cooked up bogus internal polls showing Carson pulling 20 percent of the Iowa vote, though all the independent polling had him at seven or eight, and when Carson’s number ended up closer to the independent polling rather than his own bogus polls, his yes-men convinced him that it was Ted Cruz’ campaign spreading a CNN report the yes-men allowed to happen to the tune he was quitting which cost him some 10 percent of the vote in Iowa.

The whole thing is so painfully ridiculous that it’s amazing it’s traveled as far as it has, but Ben Carson actually believes he’s not a first-tier candidate because of that CNN report being spread around. It’s why he wouldn’t forgive Cruz after the latter made a totally needless apology for his campaign circulating the initial CNN report and not the later walkback, and it’s why Carson is endorsing Trump.

He’s the Secretary of Butthurt in Trump’s prospective cabinet.

But like Erickson said, Carson – the Miss Manners of the 2016 presidential cycle – has no problem with Donald Trump calling him a pedophile. He has no problem endorsing the man who did this to him.