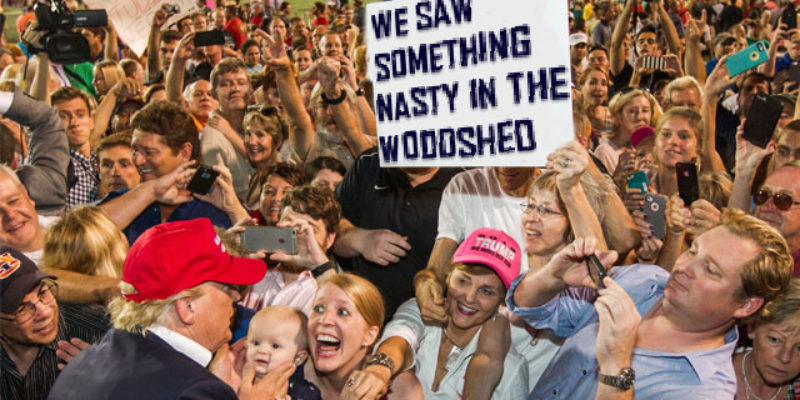 If you’re not familiar with this line, you’re among the majority of Americans who have never seen one of my favorite movies, Cold Comfort Farm.

Cold Comfort Farm was, I think, the first movie Kate Beckinsale was in. She was really just a kid in it, and she barely looked like she does now – this was before the plastic surgery and the personal trainers turned her into a poor woman’s Angelina Jolie who beats up guys on film in vampire movies. She played a young 1930’s London woman whose parents just died and must choose among relatives with whom she will live.

And as it turns out, young Kate chooses the hayseed relatives who live at Cold Comfort Farm. They’re a rather dysfunctional lot, and they’re led by the grandmother who is crazy beyond doubt and whose mental illness is enabled by the rest of the family, terrified by her as they are.

Why is she so tyrannically insane? Well, because she saw something nasty in the woodshed as a child. Everybody tolerates this until the grandson, played by Rufus Sewell, gets recruited by a Hollywood producer with whom Beckinsale’s character is friendly to leave the farm and become a star…

And as an aside, the uncle, played brilliantly by Ian McKellan, is a semi-famous preacher whose style doesn’t quite rise to the level of Joel Osteen’s Prosperity Gospel (this scene’s hilarious)…

What does this have to do with anything?

If you haven’t figured it out by now, I’m disappointed in you. The grandmother is Trump’s supporters.

They’ve seen something nasty in the woodshed, and therefore they have license to become horrifically fact-resistant and delusional voters.

It doesn’t matter that Trump has shown zero command of policy. Even things which are basic building blocks of electability as a Republican candidate like competently articulating a pro-life position that doesn’t involve discussing the “punishment” of women who seek abortions seem beyond Trump’s ability or desire to read up on how to properly handle a GOP nomination.

It doesn’t matter that Trump can’t seem to conduct himself with even a small measure of class; it wouldn’t have taken any real sacrifice to put the Michelle Fields-Corey Lewandowski controversy to bed, a simple apology would have done. Instead Trump let that fester until the point where it helped to disqualify him with women voters.

It’s almost an axiom that you don’t want to be the candidate of the National Enquirer, but Trump not only embraced it, he’s been back to that well repeatedly. Apparently the latest is that the Enquirer is trying to tie Cruz to the DC madam, the same bordello proprietor whose phone records snared David Vitter. There is zero proof of this connection, and it seems strange that Cruz would have been engaging her services in 2005 and 2006 when he was a mere bureaucrat in the Bush administration. How any of this would help Trump is a question, and it most definitely hasn’t.

But these rather telltale signs that Trump’s candidacy lacks the merit of, say, a Ronald Reagan’s – Reagan was, after all, the gold standard of insurgent Republican candidacies, but the reason why was Reagan’s command of philosophy and policy earned over years of study and advocacy, not to mention two successful terms as governor of California. Trump, unlike Reagan, is winging it, and he’s finding out that you simply can’t carry home a presidential election on a wing. His operation is a mess and it’s falling apart, and Cruz is picking him clean on delegates.

But his die-hards are more interesting in demonizing Cruz for hustling delegates than questioning whether their candidate is worthy if their loyalty.

Because they saw something nasty in the woodshed.

Well, maybe the woodshed is Congress. Or maybe it’s the Obama White House. Or a college campus somewhere. Or a local city council. Or the company where they work. At some point somewhere, a lot of these people took a look at American society and culture and decided they were alienated and angry, and what they really want is to drop the plunger and blow the whole structure up. That’s a mentality which is not wholly irrational in our politically correct, dysfunctional Social Justice Warrior society, in which you’re a bigot if you don’t think it’s a good idea to let a man in a dress into the ladies’ restroom, but couple a healthy disdain for political correctness with a neglect of serious policy examination and an unhealthy buy-in to the current victim-mentality fad and you have people who are willing to embrace a boorish, anti-intellectual, vapid, unprincipled reality TV star as the savior of American civilization…because they saw something nasty in the woodshed. They’re angry and entitled, and therefore they’re going to act out like children and demand to be coddled in the same way they’ve seen the victim-mentality people on the Left treated.

There is nothing wrong with rejecting this. The Republican Party has its most aggressive, intelligent, principled and hard-working conservative candidate since Reagan in Ted Cruz, and Cruz is in the process of dismantling Trump – not just in the Wisconsin primary vote tonight but in state conventions across the country where he’s outworking Trump’s weak campaign organization for delegates. Cruz is everything John McCain and Mitt Romney, who both ran flaccid campaigns and lost to Barack Obama, were not.

There is no reason, particularly for Trump supporters disillusioned with the typical Beltway political games, to reject Cruz rather than to suspend their cynicism and back Trump with all of his heretical anti-conservative history and frequent gaffe-tastic displays of ignorance.

We know you have seen something nasty in the woodshed. The question is, did it see you, baby?