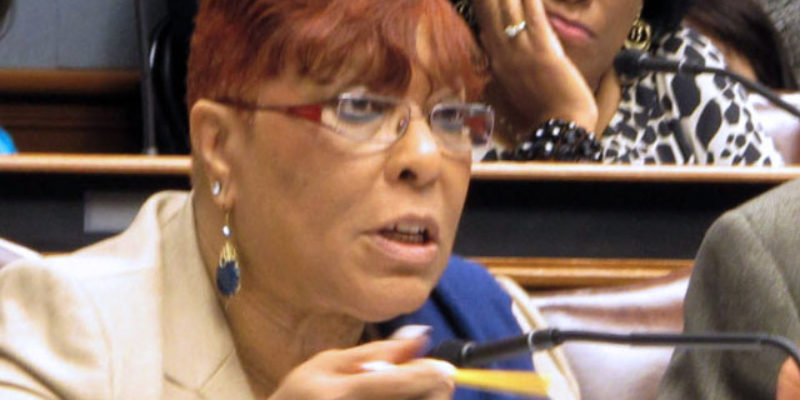 There’s an entry in the Letters To The Editor section at the Baton Rouge Advocate today which is noteworthy in its obnoxiousness to our public discourse.

It’s by Rep. Pat Smith, she of the unusual red hair-dye job and obsequious mendacity in defense of the state’s criminally-underperforming public schools. And it’s a direct broadside at the Louisiana Federation for Children, a school-choice group who fights for charter schools and vouchers in hopes of giving poor kids trapping in failing and unsafe public schools a way to a better life.

Smith accuses LFC of “scare tactics” because it’s running ads on TV and radio in Baton Rouge noting that the teachers’ unions’ governor, John Bel Edwards, lied to the people of Louisiana, and specifically the mostly African-American parents of kids in the voucher program in New Orleans, when he said he wouldn’t deny anybody in the program the right to stay in it. Edwards’ budget proposal cuts the voucher program from $42 million to $36 million, though the governor somehow alleges that’s not actually a cut and if there is a cut it’s Education Secretary John White who’s responsible.

White’s basic response to that, in slightly less colloquial terms, is “what the hell are you talking about?”

More than six figures have been spent to run a blatantly false ad claiming that Edwards proposed budget cuts to the school voucher program. Hundreds of thousands of dollars spent on lies. Honestly, I don’t know what’s worse, the fact that out-of-state and out-of-touch billionaires have decided to take aim at our governor or that they decided not to spend their money more wisely to make a real difference for the children they supposedly care about.

It’s not “blatantly false” to claim that a budget which shrinks from $42 million to $36 million is being cut. The budget is being cut. For Smith to claim it isn’t is a falsehood one can only shake one’s head at – you could try to explain away the idea of the cut somehow, but no – it’s not “blatantly false” to say that a budget proposal which seeks to shrink funding by one-sixth is a cut.

Then there is Smith’s repeating the allegation made in a breathless press statement by Edwards earlier this week accusing the Louisiana Federation for Children of being “out-of-state and out-of-touch billionaires” – we addressed that a couple of days ago by noting that the funding behind the organization, whose president, Ann Duplessis, is a black Democrat from New Orleans who is formerly a colleague of Pat Smith’s in the Louisiana legislature, mostly comes from Louisiana businessmen and most prominently Baton Rouge industrial construction CEO Eddie Rispone. It’s simply not true to say that LFC is an out of state organization. It’s affiliated with the American Federation for Children, sure – but in no more subservient a way than the Louisiana Federation of Teachers, for example, is affiliated with the American Federation of Teachers or the Louisiana Association of Educators is affiliated with the National Education Association.

You don’t get to assail LFC as an out-of-state entity while carrying water for the Louisiana affiliates of national teacher unions. Smith is no rocket scientist but she can’t possibly be that stupid.

Where were these activists during the first special session when Edwards proposed a comprehensive plan to stabilize the historic budget deficits left by former Gov. Bobby Jindal and avoid catastrophic cuts, including those to the voucher program? I was there. They were not.

Another lie, and it ought to be said that while Smith voted against the budget establishing the “historic deficits” Jindal left to Edwards last year, Edwards voted FOR the budget. The Louisiana Federation for Children was absolutely at the Capitol during the special session, even though there were few bills dealing with their issues being debated. And by the way – Pat Smith is a state legislator. It was her job to be there. What does she want for doing her job? A cookie?

She then says state legislators who refused to raise taxes are to blame for the voucher program getting cut, after she just said it was “blatantly false” to claim the budget was cut. That surely makes sense under Smith’s crimson-dyed coiffure; for the rest of us, not so much.

The truth is that no student currently receiving the voucher will lose it, and more importantly, when our state is still facing a crippling budget deficit, Louisiana Federation for Children has proven themselves to be a part of the problem and not the solution.

Really? How do you shrink the funding for the program from $42 million to $36 million without any students being put out of the program? Suggest you can cut the budget of a state agency by one-sixth and people like Pat Smith will tell you it’s not possible to do so and still provide the same level of services to that agency’s clientele. If she thinks that the private sector is capable of such innovative management practices, wouldn’t that be the strongest endorsement possible for expanding the voucher program in a move signaling a more efficient use of taxpayer dollars?

We assume she’s making this statement because to execute this cut she thinks the vouchers will just get smaller by one-sixth rather than the slots to receive vouchers will drop from 7,100 to somewhere under 6,000. That’s hardly the end of the discussion, despite what our scarlet-mopped Arbiter Of Truth would have us believe.

Precisely why is it that Smith thinks all of the schools currently accepting vouchers would agree to take a one-sixth haircut in the program to maintain the students in them? Those schools are not bound to remain in the program; their costs go up annually, so how is it that anyone believes many of them wouldn’t pull out when the deal the state is offering gets 16.7 percent worse? Is it faith which informs her taking such a position and terming it “truth,” or is it economic illiteracy?

Again, Smith might be stupid – we can be convinced of that – but she’s not THAT stupid.

It’s pretty clear Smith is doing John Bel Edwards’ dirty work in trashing LFC; he already fired off his shot against them, so for him to pen that LTE would look like overkill and bullying. She’s parroting everything he said in his press release, though, and it doesn’t come off as any more dignified or any less laughable.

What it comes off as is, to borrow Smith’s word, shameless.