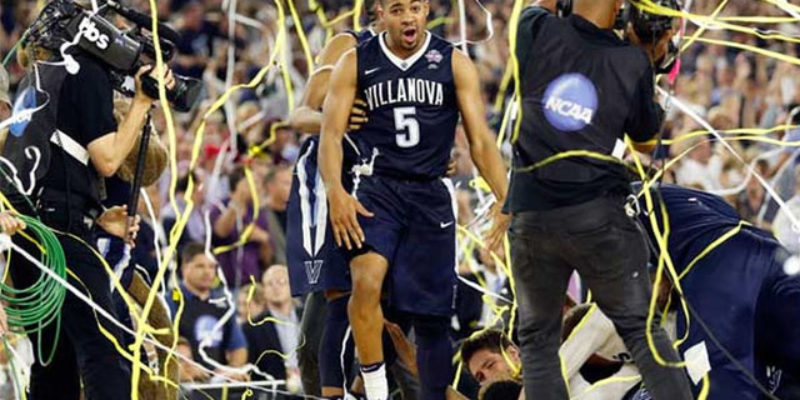 As I write this I’m watching Villanova and North Carolina slug it out in the second half of a truly outstanding game for all of college basketball’s marbles.

And as an LSU fan I can’t even enjoy the damn thing because I’m so disgusted at how far away from these great heights my university is. The knowledge that not only, with the likely top pick in the NBA Draft and not one but two other players who have declared themselves eligible for it, was my team nowhere near the level of basketball on display tonight but that things will in all likelihood be much, much worse next year, just drives me to distraction.

There has been a great deal of activity inside and outside LSU Basketball in the past few days which has contributed to a feeling that the program is headed down the tubes and an opportunity to arrest the decline was missed. Last week on the Red Bayou Show, we had a protracted discussion with Derek Ponamsky, who is The Prince on the Culotta And The Prince show on ESPN Radio-Baton Rouge every morning, on this same issue. Here was the podcast…

Ponamsky took the position that LSU’s season, disappointing though it was, wasn’t enough to cost Johnny Jones his job. He said that if the Ben Simmons-Tim Quarterman-Antonio Blakeney led Tigers had found a way to win a couple more games this year they’d have been in the NCAA Tournament and there would be no talk of changing coaches.

I don’t think he’s wrong in the facts he cites, but the 30,000-foot view is that LSU is a national embarrassment and has been all season. The basketball experts saw Jones coach at LSU for three years leading up to this season, including his blowing a 16-point lead late in the 2nd half of an NCAA Tournament game against NC State last year, and nevertheless ranked the Tigers in the Top 25 before the season. They proceeded to lose pre-conference games by the bushel, dropping out of the Top 25 and even falling off the NCAA bubble by early January, before going on an 8-2 run to start the SEC slate. And then they proceeded to finish 3-5 in the rest of the conference and bowed out of the SEC Tournament by scoring just 38 points against Texas A&M in the semifinals.

Ponamsky pointed out that given the state the program was in with respect to team chemistry and injuries/illnesses affecting Keith Hornsby and Blakeney, it was probably the right thing to do to quit rather than playing in the NIT – assuming they did, in fact, have an NIT bid to reject. He might be right. That the coach allowed a season which began with the team ranked in the Top 25 to devolve so badly that it was better to voluntarily end the season rather than to compete any further, says volumes to me.

But Jones’ job is safe. LSU has already announced he would be back next year. There are people who will tell you this is a function of university president F. King Alexander laying down the law that no high-profile “unnecessary” expenses – like paying buyouts to athletic coaches who need to be bought out – be incurred, on account of LSU’s “budget troubles” with the state legislature and the idea that if LSU gets private dollars to buy out coaches’ contracts the university won’t fare well in attempting to secure appropriations from the legislature.

If this is indeed the case, I should pass along the substance of a conversation I had with a Democrat legislator a week and a half ago. This legislator, who is not an “LSU guy” but does in fact care about LSU sports, asked me “Why is your guy pissing on his product?” Meaning that he had every expectation that a coach who has Ben Simmons on his team and can’t make the tournament with him certainly shouldn’t expect to keep his job – and if the university president won’t get donors to pay the buyout so that he can hire someone better and thus improve LSU’s product in a high-profile venue that shows off the university’s competitive prowess, why should even Democrat legislators be willing to support tax increases to fund the university?

That conversation tells me Alexander’s prohibition on buyouts has a reverse effect on even its intended audience. You could make the argument that its manifestation in the Les Miles episode back in November wasn’t an altogether terrible result; firing Miles was disputable as the right play in pursuing excellence at LSU, and he seems to have taken that controversy as a challenge to be met. Since November Miles’ job performance is quite encouraging, though what happens this fall is what counts. But with Jones? The question isn’t whether he’s going to get fired as LSU’s basketball coach but when.

In other words, he’s here for one more year and that’s it.

We know this, because it’s pretty easy to read the tea leaves.

Simmons and Quarterman both signed with agents and declared for the draft; that surprised no one, though the season Quarterman had was anything but the kind of resume-building campaign somebody who expects to go to the NBA would have. He was terrible as a junior, so much so that losing him might almost be addition by subtraction.

Except that with Blakeney declaring for the draft as he did last week, LSU all of a sudden doesn’t have a replacement for Quarterman. Blakeney was better than Quarterman for most of the second half of the season, but if you’re losing both players plus Hornsby you now only have Brandon Sampson, who had a terrible freshman season, returning as a shooting guard.

And don’t pretend Blakeney, who didn’t sign with an agent, will return to LSU. Regardless of how he does in the NBA draft camps he’s gone.

If that news wasn’t foreboding enough, things got a bit more dire when David Patrick, Jones’ lead recruiting assistant, took a job as the top assistant to Jamie Dixon, the new coach at TCU. Patrick was clearly leaving a sinking ship, and when he left it marked the opening of a major hole in the LSU program.

And then Monday Cedric Russell, a prolific scoring guard from Peabody High School in Alexandria who was LSU’s only commitment for the 2017 recruiting class, decommitted. Word is he’s likely going to Baylor. Jones, who doesn’t have a lead recruiter on his staff now and is considered all but a lame-duck coach, has no players committed for 2017 when he’s due to have at least three scholarships to give.

If LSU doesn’t win next year and Jones is changed out, the new coach will have a dumpster fire on his hands. Recruiting, the reason Jones was hired in the first place and his calling card for the last four years, is likely to tube. If the program has any more attrition beyond Blakeney the new coach’s first year could easily be a scramble to find warm bodies to put on the floor. That’s what a program typically looks like when a coaching change is overdue – it’s what LSU looked like at the end of Dale Brown’s time, and it’s what LSU looked like at the end of Trent Johnson’s time.

Meanwhile, around the country teams are making exciting hires of coaches coming off outstanding displays of their craft. Stephen F. Austin’s Brad Underwood got the job at Oklahoma State. Chris Beard of Arkansas-Little Rock signed on at UNLV. Stony Brook’s Steve Pikiell is taking over at Rutgers. Vanderbilt, who saw Kevin Stallings depart for Pittsburgh to replace Dixon, hired Valparaiso’s Bryce Drew. UAB head coach Jerod Haase is now at Stanford. There are some outstanding up-and-coming coaches at mid-major schools who didn’t move up this year, so LSU would still have some options next season, but the program will have taken a significant hit to its prestige after suffering through what’s likely to be a losing season.

And the other reason given for Jones sticking around after this season – namely, the politics surrounding the program and the Stanley Jacobs-Dale Brown-Collis Temple axis which produced him as LSU’s coach in the first place – won’t be able to save him. That politics should have an effect of hiring and retaining coaches who don’t win is hard to explain in the first place; what’s instructive is how often it seems to prevail at LSU.

Quality leadership would have had LSU bidding for a Beard, Underwood or Drew – or maybe even a Dixon; he after all is a TCU graduate but he was making $3.2 million a year at Pitt and that wasn’t enough to keep him there. Instead, LSU fans can watch replays of Villanova and North Carolina and fantasize about someone, someday, delivering that caliber of product to the Pete Maravich Assembly Center.

Interested in more national news? We've got you covered! See More National News
Previous Article Candy Thief Faces A 20 To Life Sentence In New Orleans
Next Article The BP Oil Spill Settlement Was Finalized Today, And The State Has Already Spent $200 Million Of It