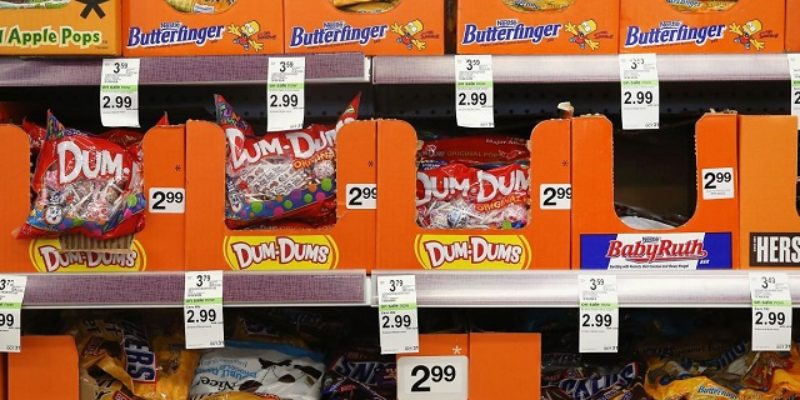 From a city where the murder laws are barely enforced we have this insanity.

A man named Jacobia Grimes was arrested for shoplifting $31 worth of candy from a Dollar General. Before police arrived, Grimes took the candy out of his pockets.

Normally, Grimes would be charged with a misdemeanor because the value of the amount of goods stolen was so low. Instead Grimes was arraingned for a felony which is punishable by two years in prison. Not only that, Grimes is being charged as a “habitual offender” which means he will be looking at 20 years to life if he is convicted.

What were some of Grimes previous offenses? The Advocate explains:

Grimes’ attorneys, Miles Swanson and Michael Kennedy, said his prior guilty pleas — from 2001 to 2010 — were for similar shoplifting attempts.

Details of Grimes’ prior heists were not immediately available from court records, but Swanson said the victims in those cases were Rite-Aid, Sav-A-Center, Blockbuster Video and Rouses stores.

All involved thefts of less than $500 worth of items. In the last one for which Grimes pleaded guilty — accepting a four-year sentence in 2010 as a double offender — he relieved a Dollar General of some socks and trousers, Swanson said.

He said Grimes could have been charged with a state misdemeanor under a different statute.

“I just think it points to the absurdity of the multiple billing statute. They’re spending their time to lock someone up for years over $31 worth of candy. It’s ridiculous,” Swanson said.

Grimes also has convictions for possession with intent to sell fake drugs and obscenity, a crime committed while he was behind bars.

Since March 2001, he has spent a total of nearly nine years in state prisons, mostly for shoplifting: first a year, then 18 months, then three years and finally a little over three years ending in 2013, according to state Department of Corrections spokeswoman Pam Laborde.

First of all, why in the hell would you shoplift from Dollar General and secondly, why would you do it multiple times? It wouldn’t surprise me if we’re dealing with a case of mental illness here. In fact, The Advocate all but implies Grimes is suffering from some kind of condition and his attorneys admit he is suffering from heroin addiction.

Now we have a DA’s office in Orleans Parish, which is little more than a revolving door for violent criminals, that is deciding to crack down on the scourge of shoplifted candy from Dollar General. They can’t punish murderers, but they can sure go after the guys who shoplift Dollar General. Overcharging in relatively minor cases like this is standard practice at the Orleans Parish DA’s office.

The possible sentence in this case is absurd by any reasonable standard. Our buddy Kevin Kane at the Pelican Institute pointed out in The Advocate that this case points to the need for criminal justice reform and reviewing absurd mandatory minimum sentences like this.

To be fair, the state is in the process of doing that through the Louisiana Justice Reinvestment Task Force. The task force is expected to get started on its work this summer.

Holly Harris, who I met last year at the Charles Koch Institute’s “Restoring Justice” conference in New Orleans, is also right to point out that the state has done a terrible job at helping ex-felons reenter society. It seems that Grimes is yet another textbook example of this failure. The Legislature needs to address this issue next year.

Because of this case Louisiana is once again in the news for something embarrassing. However, this is for an issue that can and should be addressed by the Legislature.

Is there a place for mandatory minimums? When we’re dealing with violent crimes, yes. But using them for $31 worth of candy is silly.