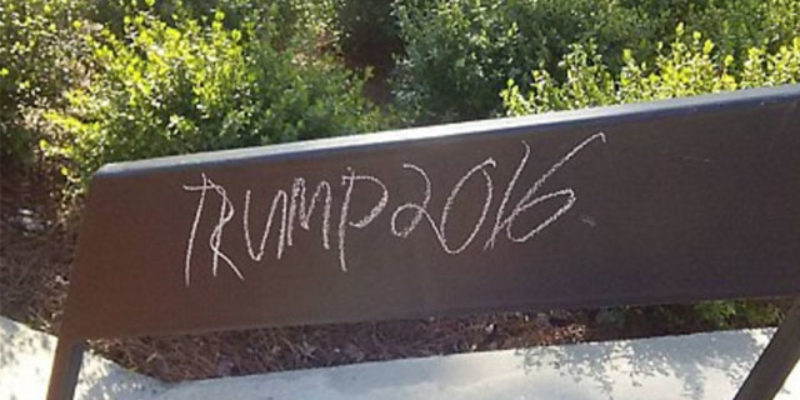 Another week, another campus threatened by the dangerous slogan, “Trump 2016.”

Last week, the students of Emory University in Atlanta needed counseling and mental health evaluations after noticing their campus was polluted by disgusting chalk markings. The offensive words included “Trump,” “Trump 2016,” and “Vote Trump” and they were found on concrete steps and even, heaven forbid, the sidewalk.

Immediately after noticing the horrific chalk graffiti, 50 students demanded a meeting with Jim Wagner, Emory University President, because they felt “genuine concern and pain.” Even worse, Wagner met with the lunatic liberals and promised an “investigation,” which raises the true concern of whether free speech is even allowed on the campus.

This week, a student at Scripps College, an all-female liberal arts college in Southern California, noticed the dangerous phrase “Trump 2016” written on a marker board. Thereafter, student President Minjoo Kim took decisive action and called the police because the slogan was “racist” and obviously expressed “violence.”

Of course, such foul language had never before been seen on the pristine campuses. Never mind that slogans for Democrats and far left groups such as Black Lives Matters frequently have appeared on the Emory University campus. These markings never generated a scintilla of criticism, but the word “Trump” turned the students into piles of mush in need of psychiatric care.

At Scripps College, the offending “Trump” slogan was written on the marker board of a Mexican-American student. According to Kim, this marking was “intentional violence” that indicates “racism continues to be an undeniable problem and alarming threat on our campuses.”

If the students of Scripps College cannot handle a word on a marker board, they are not going to be able to deal with the real world. Our colleges and universities are obviously educating millions of young nitwits who lack the courage and common sense of students in previous generations. It shows what unadulterated political correctness is doing to our young people today, a genuine tragedy.

These ridiculous episodes perfectly highlight what is happening to the vast majority of the college campuses of today, which are factories for liberalism and sensitivity training where no serious debate is even allowed. In fact, conservatives are rarely hired as professors or administrators or even allowed to speak on campuses. If one does actually get invited, they are met with howls of angry protests and calls to cancel the engagement.

This is exactly what happened a few weeks ago when conservative author Ben Shapiro was invited to speak at California State University, Los Angeles. He was met by hundreds of student protesters who tried to storm the auditorium and prevent him from speaking. It was such a chaotic scene that he needed police protection to safely leave the event.

Liberals on college campuses today do not want to allow conservatives to give commencement addresses, teach a class, speak or even write a slogan on a sidewalk or marker board. It shows that our college campuses, which should be laboratories for healthy discussion and debate, are actually stifling true intellectual curiosity. These campuses are not bastions of the First Amendment at all, in fact, free speech is discouraged.

A major reason for this oppressive environment is that liberal students, professors and administrators do not have any confidence in their convictions. They realize that if their positions on income inequality, racial justice, climate change or a myriad of other liberal causes are actually challenged by conservative opposition, the weakness of their arguments will be exposed.

It is the educational equivalent of one party rule. In such a sad state of affairs, chalk and markers have become dangerous methods of projecting either unacceptable ideas or even the name of a politically incorrect candidate such as Donald Trump.

In previous generations, America’s young people help defeat the Great Depression, Nazism and fascist tyranny, Today, our young people are captives of a system that is turning them into sniveling cowards afraid to debate and face the challenges of the real world. Alas, these developments do not bode well for our country’s future.