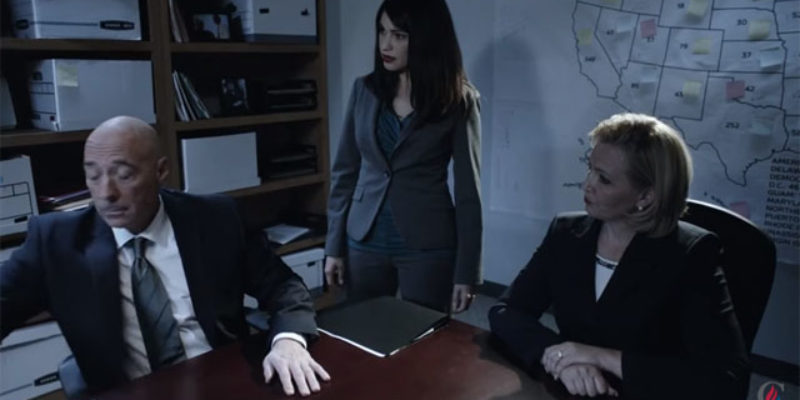 No, really. This is one of the best political commercials ever made.

It won’t be on TV unless it gets recut, because it’s two and a half minutes long, but to recut this would be a shame. It packs in many of the reasons why Cruz is a better nominee than Trump, gets across the key point that if Trump is the nominee the media which has been fawning over him will turn on him the same way they turned on John McCain and Hillary’s opposition research feeding into the media coverage will turn the entire general election race into an implosion, and points out that Cruz can make the case for himself as the embodiment of what the American people say they’re looking for in a president.

But even if you don’t buy the substance of the ad, you have to appreciate the showbiz of it. It’s one of the best-produced pieces you’ll see in a campaign spot. This woman they’ve got playing Hillary Clinton is perfect. Looks just like her and does a great impersonation without saying a thing. The actress playing Huma Abedin also looks just like her, and does just enough to scare the crap out of anybody not already scared by the prospect of Huma Abedin being Valerie Jarrett Version 2.0. There’s even a John Podesta lookalike.

You couldn’t knock this down to a :60 spot, I don’t think, but if you could it ought to run over and over and over and over again in every remaining state. Clearly the campaign hopes releasing it will cause the cable news networks to run it in their news packages and give it earned media exposure, plus have it go viral on social media and the blogosphere. For a spot this good that could well work. It’s worth watching as entertainment, not just a political ad.

Consider this love. Consider this our puppy-faced adoration for the Cruz campaign a la Sean Hannity’s nauseating sycophantic treatment of Trump. Consider it whatever you want; we’re fine with it. An ad this good speaks for itself.