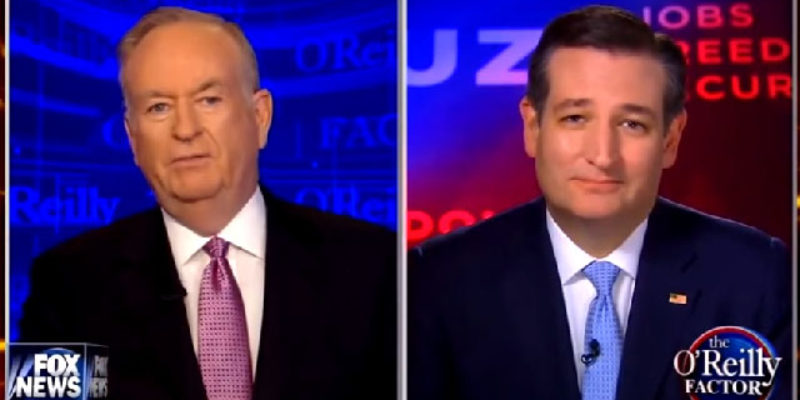 If you caught Bill O’Reilly’s show last night you saw an interview with Ted Cruz which was perhaps unavoidable, in that the New York primary is the next big event on the GOP side of the presidential race and Cruz is fighting headwinds for having referred to Donald Trump’s “New York values,” and a lot of the Big Apple media culture has decided to be offended by that comment Cruz made.

Most of the voters Cruz can get in New York know what he meant – New York is a place, after all, where the governor will allow Yoko Ono to influence energy policy and the mayor of New York City is more vigilant in enforcing the laws against purveyors of untaxed “loosey” cigarettes than violent crime, and filthy-rich liberals buy their way out of idiotic restrictions on freedom that regular people groan under. Most New York Republicans, in fact, can’t stand that about the place as much as they might otherwise love it; they’re not offended by someone referring to their plight in the same way conservatives in California routinely advertise the idiocy of their elected leaders and the damage they’re doing.

But the New York media, which includes O’Reilly, just can’t stand the idea that Cruz could get away with sneering at New York values, and it wants him to apologize for the comment. O’Reilly tries to take him task for it and to defend Donald Trump from being painted with that brush. Cruz isn’t backing down – while he doesn’t particularly challenge the idea that Trump is no particular New York liberal he makes a point of saying that when Trump writes checks to fund the Charlie Rangels, Anthony Weiners and Chuck Schumers he might as well be supporting the big-government leftism they espouse since his bank account is supporting them.

And when O’Reilly balks at that, excusing the check-writing as just the cost of doing business, Cruz makes the point that this is why Trump can’t be expected to fix that problem given all of what he’s done to help create it. And it ends with Cruz stating the obvious – that O’Reilly is in the tank for Trump. Which, while O’Reilly denies it, is obvious. Just like it’s obvious Sean Hannity, Eric Bolling and Greta Van Susteren are in the tank for Trump. That it isn’t somehow good enough for Trump, because apparently O’Reilly has made The Donald angry and for now he won’t go on his show, doesn’t change the fact Trump gets sycophantic coverage on O’Reilly’s show.

Factually, Cruz is correct. It’s a ballsy move, though, because it’s keeping the “New York values” bit alive when it’s probably more of a hindrance than an asset in the New York primary. And while Cruz isn’t going to win New York he does need to get above 20 percent and keep Trump under 50. Being “controversial” in New York and getting beaten up by New Yorkers on TV and in person for two weeks ahead of the primary there might serve as a drag on the campaign.

Unless he’s able to galvanize the New York Republican dissident vote, that is. Maybe there’s enough of that to fuel 25-30 delegates for Cruz out of the Empire State. If he can do that and John Kasich, who is now suspiciously spending what little money he has in attacking Cruz rather than Trump in New York (if that doesn’t come off like an audition for Trump’s VP we’re not sure what does), can peel off another dozen or so, then the abuse and acrimony will be worth it for Cruz, because Trump’s win in New York will be relatively hollow when it comes to delegates.

Here’s the clip, via Mediaite…