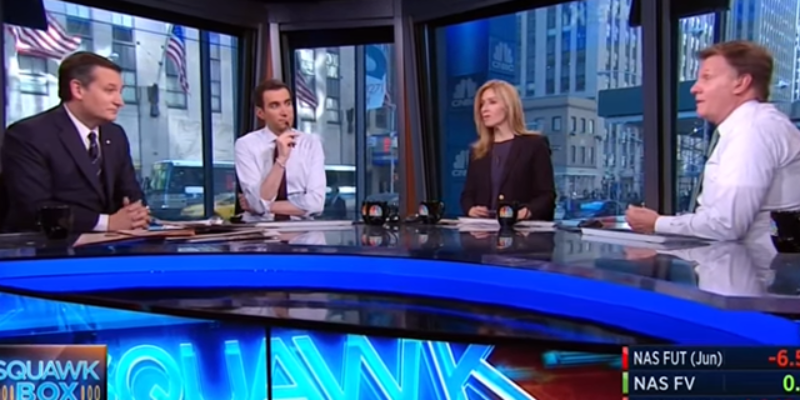 This is from yesterday morning. Cruz does 46 minutes with the Squawk Box crowd, all of it on taxes, the Fed, financial regulation and the interplay between big business, small business and the government, and you will not find a political figure with a more detailed understanding of economics and the role public policy plays in economic outcomes than this man. There are several illuminating moments in which Cruz demonstrates he understands how asset bubbles are created and the relationship between capital and labor and why the government dictating a minimum wage has negative unintended consequences, and he even gives the best and most courageous articulation of global warming skepticism of any major Republican candidate in American political history.

Cruz is a Reagan supply-sider, unapologetically so, something that is made very clear when Art Laffer comes on for a few minutes in the second half of the clip to talk about Cruz’ tax plan. For those who don’t think Cruz has a hopeful message for the American people and can’t inspire votes, watch this and repeat that accusation (you can’t). He’s the most optimistic candidate about economic growth and the power of small business to change the world to come along since Reagan.

While he might not have won over all of the Squawk Box crowd, it’s clear they respect his knowledge of economic issues and can talk with him on a higher level about those issues; the only real reticence one hears is on the question of whether a 10 percent flat tax could pass through Congress, which Cruz answers by recalling Ronald Reagan’s taking his reductions of the top tax rate from 70 percent to 28 percent to the American people and making the Congressional switchboard light up in favor.

It’s a masterful performance, and it shows why anyone – and particularly Donald Trump, Bernie Sanders or Hillary Clinton – who enters a one-on-one debate with this man will be bringing a knife to a gunfight. It’s little surprise why Trump is running and hiding from a head-to-head debate with Cruz.

Interested in more national news? We've got you covered! See More National News
Previous Article ANGELLE: It’s Time To Make The Federal Government Listen To Louisiana On Oil And Gas
Next Article How Badly Has Our Educational System Pulled Its Victims Away From Objective Truth?