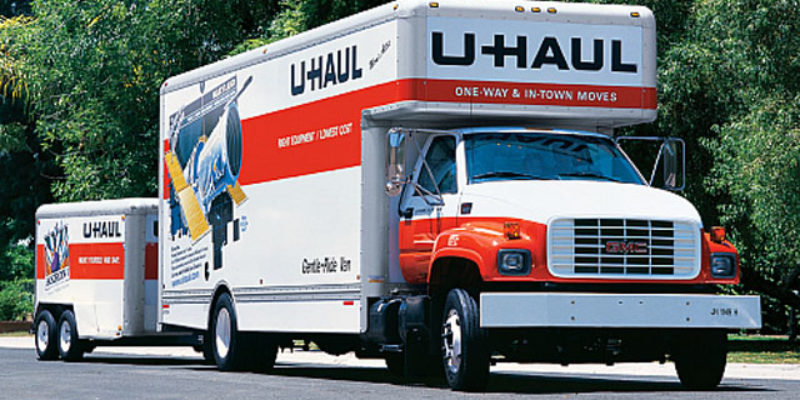 A couple of months ago we heard a rumor that Texas governor Greg Abbott would be opening an office in downtown Baton Rouge for that state’s economic development office to do recruiting of Louisiana companies negatively affected by changes to the state’s tax policy.

If anything has come of that, we haven’t seen it. Not that it would be surprising in the least; after all, Texas has had a predatory effect on Louisiana’s economy for decades, whether actively or passively, and Texas has been extremely active in poaching companies out of California to relocate to the Lone Star State; they’ve been able to grab entire industries through aggressive recruitment efforts and advantageous economic conditions.

And now, there’s this… 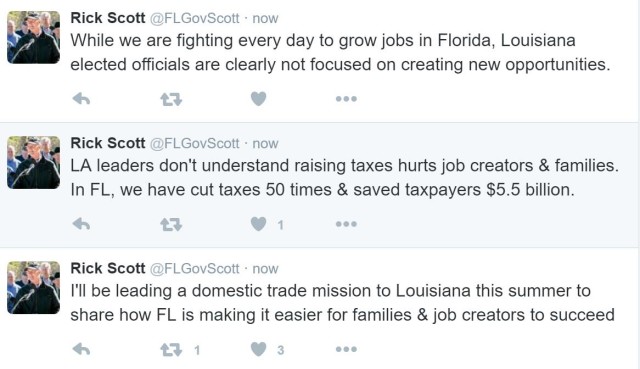 Rick Scott isn’t the most charismatic individual you can find to run a trade mission, but the fact is Scott has taken a Florida economy that Charlie Crist had run straight into the ground and made it competitive again. Florida isn’t booming like it was a decade ago but it’s not dead in the water like it was when Scott took office, either – and that’s because he’s running an economic policy agenda which is built to attract investment and grow that state’s economy.

Say what you want about the two terms of Bobby Jindal’s tenure as Louisiana’s governor, but in those eight years you didn’t hear trash-talk from Texas and Florida about coming in here to steal jobs and capital away. Louisiana competed on the economic playing field, and held its own. Sure, when the price of oil went down the tubes it took the state’s economy with it, but that’s beyond the control of Jindal or any other politician.

What we have now is a governor trying to raise taxes and grow government in the midst of a recession. And the vultures are circling.

Back in the 1980’s, amid the utter disaster that was Edwin Edwards’ third term, the joke was “Last one out of Louisiana, turn out the lights.” There’s a different Edwards in the governor’s mansion now, but the joke could well be the same before long.

UPDATE: And Edwards’ press flack Richard Carbo fires back with a statement. Ask yourself if there is anything in here that would dissuade Rick Scott’s potential recruiting targets from listening to his pitch…

“Gov. Scott is trying to distract from his disappointing economic development initiatives that are failing in Florida as we speak,” Carbo said in a statement. “While he supported Bobby Jindal’s plans that have crippled our state and led to two credit downgrades, Gov. Edwards has worked night and day to stabilize our state from the reckless policies Gov. Scott’s coming to promote. He’d be best served staying in Florida to tend to the business of his own state. Louisianans and Floridians would prefer productive dialogue over more gimmicks from slick-talking politicians.”

And there is no reason whatsoever why businesses Edwards is raising taxes on shouldn’t listen. It’s clear our Democrat governor is at best indifferent if not abjectly hostile to their concerns in comparison to his beloved public sector.

Interested in more news from Louisiana? We've got you covered! See More Louisiana News
Previous Article The Red Bayou Show, Episode 44 – Mailbag Edition
Next Article VIDEO: One Thing About Trump As The Nominee Is He Won’t Run A Nice-Guy Campaign