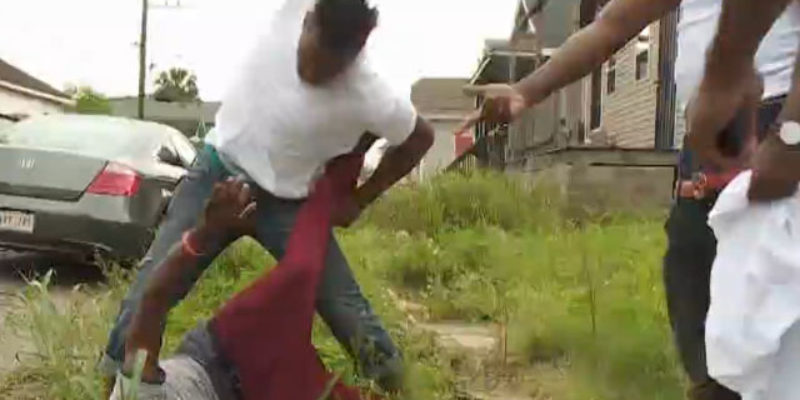 Here’s a fascinating clip which appeared on WWL-TV either last night or this morning. Eric Paulsen, the station’s anchor, is doing a series of reports on violent crime in New Orleans and the culture that produces it, and he’s teaming with Kwame Gates, a local rapper who produced a documentary on New Orleans’ status as a hotbed of murder.

And Gates brought Paulsen and his cameraman out to the Ninth Ward to talk to a few of his fellow rappers about the culture and their realization it’s not all it’s cracked up to be.

It doesn’t take long before that culture gets put on full display, as an acquaintance of Gates’ shows up, armed, and proceeds to berate him for bringing white people into the neighborhood and “disrespectin’ me.” As Paulsen’s interview comes to a premature conclusion but the camera keeps rolling, one of Gates’ friends confronts the harasser – and in no time flat is beating him senseless. And disarming him.

A lot is made in Paulsen’s report of how best to break the cycle of violence and how to change the hearts and minds of people with such toxic mentalities. Those are sentiments which are eminently honorable and creditable. Unfortunately they’re wrong, in the sense they’re not going to work.

If you really want to get rid of the murderous culture in the 9th Ward that’s on display in this video, here’s how you do it – you have the city of New Orleans declare eminent domain throughout the entire neighborhood, pay off the property owners and raze the entire community. Displace the people in it to the four winds and rebuild that neighborhood as something else. Something better.

Meanwhile, the current people, if they’re scattered, might actually find themselves living somewhere else and exposed to a different culture that might actually benefit them and allow them to live better.

Gates’ friend Easy Money, who appears in the video, clearly regrets having gotten a bunch of rap tattoos on his arm and a mouth full of gold teeth; he says those were bad decisions and he’s not sure the rap life is the direction he wants to move in; he’s concerned that continuing with it might make him a bad person and he doesn’t see himself that way.

Maybe that’s going to vo-tech school and learning how to be a welder. Maybe it’s going to work offshore. Maybe it’s joining the Navy or the merchant marine. Something. Anything but that front stoop of that hovel in the 9th Ward.

And you will not get Easy Money, or any of the other doomed young men of inner city New Orleans, off that front stoop unless you throw them off it.

That culture is toxic. It kills. You can study it all you want, you can try to understand it, you can attempt to make sense of it, but if you want to help the people in its clutches the best thing you can do is to destroy it by flattening all the places where it lives and reshuffling the deck. People who are suffering in a toxic environment can only benefit from a new environment, and New Orleans has hundreds of thousands of them.