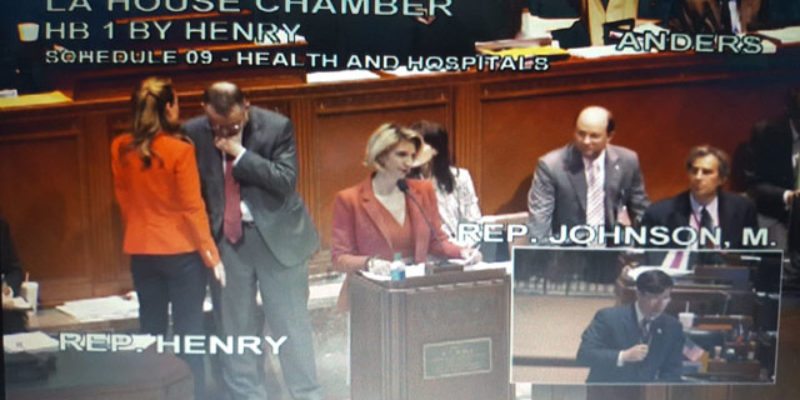 About mid-way through a full day of debate on the state budget last night, I questioned DHH Secretary Dr. Rebekah Gee on the House floor about the rampant waste and inefficiencies in her $12 Billion department (the largest in state government).

I think it is important for every concerned citizen to listen to a short excerpt of this exchange, beginning at 7:41:25 at this video link:

Here is why this is important to you as a taxpayer:

I literally questioned Secretary Gee about less than 10 lines, on just one sample page, of a 230+ page budget, for just ten minutes.

On just those two or three items that I randomly selected in her massive budget, she was forced to admit that:

1) They “really wanted” to eliminate the unnecessary board I happened to reference because it’s “off mission.” However, in her proposed budget for next year, that board is allocated $459,000 to pay for just the salaries of only three employees!

2) The $2.6 million budgeted again for the DHH “Medicaid Fraud Detection Unit” has yielded only a 0.5% return on our investment in recoveries, because DHH has “had staff out to pasture. They were literally barking up flagpoles, not doing relevant caseloads…”

I would like to have taken the DHH Secretary line-by-line through every single page of her lengthy budget, but some of my Democrat colleagues were bringing motions to limit the debate time (and even expressed outrage that I would have the audacity to ask such questions, since, as Rep. Smith jumped up to say, “I’ve never heard anyone in this body ask anybody these questions before!!…)

I am QUITE CERTAIN that the Secretary would have been forced to admit to a myriad number of other areas of waste and abuse if I had been allowed the time go through it all. In the end, all she could say was, “We can do better.”

Here is my point:

I pinpointed major areas for cutbacks and critically needed reform in just that brief exchange tonight on my randomly selected DHH budget items.

Let me repeat— that behemoth state agency gets more than $12 Billion (yes, with a “B”) of our taxpayer dollars every single year… and it is begging for MORE!!

The governor is about to call us into yet another special session to RAISE MORE TAXES, at the worst possible time! They claim they need even MORE to run all these agencies than the $3 Billion+ in brand new taxes that the Legislature has already been threatened into raising over the past two years! (I voted NO!!)

ENOUGH IS ENOUGH!! We CAN’T do that! We SHOULDN’T do that! And the people need to let their voices be heard— RIGHT NOW!!

I wrote a piece about this crisis back in February that I commend to your review. It is posted here.

Please, please help our small band of fiscal conservatives in the House by supporting our efforts to hold these massive bureaucracies accountable and REDUCE the size and scope of government before it sinks our state.

And please understand, this is not about Dr. Gee or any other individual or state official (I have no personal gripe with any of these agency heads)– it is about what philosophy of government we must begin to advance if we have any hope of saving our state’s economy.

Interested in more news from Louisiana? We've got you covered! See More Louisiana News
Previous Article The Battlefield, May 13, 2016 – Is It Time For A Conservative Migration Out Of The GOP?
Next Article No, The Senate Runoff Will Not Have Two Democrats In It