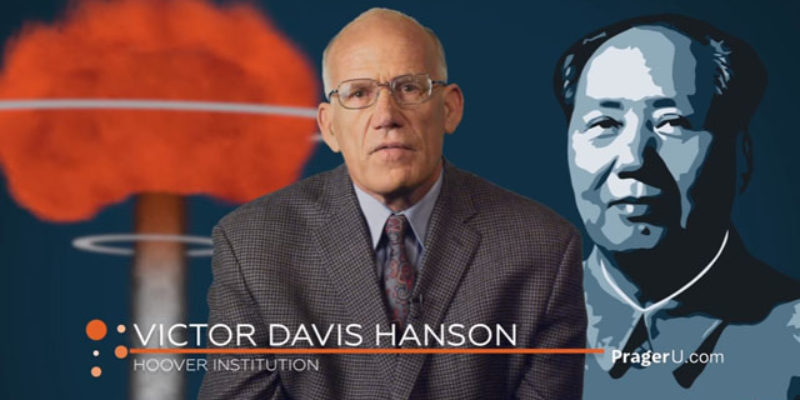 Here’s a must-watch video from Prager University, particularly given that we’re a day removed from Memorial Day and there are still a good many Korean War vets still living. Korea is something of a stepchild of a war according to popular history in this country; it cost the lives of 35,000 American servicemen, so you would think it would be worth paying attention to, but there are few movies made about it and little is made of it in the media outside of an occasional reference when the North Koreans act up.

But the incomparable Victor Davis Hanson, who is as good a teller of history (American and otherwise) as you’ll find, notes that Korea is important – because it was the first modern war in the sense that it was the first war in which American standards of victory weren’t based on the unconditional surrender of the enemy. It marked an era in which America chose to go to war for limited political ends, and as such our effort in producing victory went under-recognized.

As Hanson notes, Korea was a victory. Our primary objective in fighting that war was to save South Korea, and we did that. As a result, we set the table for the South Koreans to build, out of virtually nothing, a free, democratic, capitalist society which produces some of the world’s most high-quality goods (if, sadly, some of its worst pop music) and offers a model for other societies on how to build a first world society.

The victory in Korea was such that the larger expectation, namely that America would go to war on the Korean peninsula in order to unite North and South Korea as one free country, is less possible 60 years on than it would have been in 1950 – because South Korea is such a successful society and North Korea such a basket case that even the South Koreans would be squeamish about uniting the two now.

To do that would come at such an incredible cost the South Koreans would likely be beset with economic troubles for a generation. Consider that you have 23 million North Koreans who live more or less in abject poverty, who don’t understand any of the basic freedoms they take for granted in the South, who can’t do most of the private-sector jobs the South would expect them to do in a market economy (there are only so many street sweepers and housecleaners necessary in South Korea) and who couldn’t function in a market economy. There is no internet for most North Koreans; not even close. There are few ATM’s, or even banks, or stock markets or rent-a-car places. Attempting to introduce modern life to these people when they’re poorly equipped to contribute to it, are malnourished, are spiritually broken and are emotionally tied to a psychotic cult of personality built around the ruling family and an insane political philosophy known as Juche, which among other things casts international trade as a sin against the Korean race – you have to make everything you need at home or else you weaken your people, or somesuch – is a mammoth project.

And of course, unifying the peninsula would have to come at the end of another major war, that the South would likely win unless it devolved into a world war in which America and South Korea essentially ended up fighting China after the North Korean army was ground into dust along with most of its people. It should be noted that such a victory would be a Pyrrhic one, because while the North would quickly run out of fuel and food and its people and soldiers would very quickly pay a heavy price for almost nonexistent supply lines, the first thing that would happen is the North Koreans would immolate Seoul, one of the world’s great cities, with artillery fire and destroy life and property on a level it’s hard to contemplate.

Either that or it would come after the final collapse of the regime in Pyongyang, which would entail a humanitarian crisis that would make Venezuela look like a bad Saturday at the Hamptons.

That dilemma is a sign of success in saving South Korea, rather than a sign of failure. It was never going to be possible to unify the Korean peninsula at the outset of the Cold War, and it’s a shame our 35,000 dead in that conflict aren’t appreciated for the sacrifice they made in what has proven to be one of our great victories in American history.

The video, which you should show to your kids as well…