If you’ve been paying attention to the latest developments in the Hillary Clinton e-mail mess, you know that it might even be a worse scandal than what you thought.

We could go into a long description of how many lies have been told in an effort to avoid prosecution and blame. But rather than go there, we just need to show you some video from a call-in she did to Chuck Todd and Meet The Press Daily…

Nobody is buying this. Not even Chris Cillizza of the Washington Post…

The inspector’s report notes Clinton (a) shouldn’t have exclusively used a private server for her email correspondence and (b) given that she did, should have turned over all of her correspondence to the State Department immediately after she left office in February 2013. Clinton eventually turned over a portion of her emails — more on that below — but didn’t do so until December 2014 and “only after the State Department requested them as it prepared responses for the Republican-led House committee investigation into the 2012 attack on U.S. diplomats in Benghazi, Libya,” according to apiece by WaPo’s Roz Helderman and Tom Hamburger.

As for Clinton’s assertion that she has turned over “all” of her emails, remember that Clinton deleted more than 31,000 emails that she deemed personal before ever turning anything over to the State Department. There was no third party brought in to make judgments on what was entirely private and what might be closer to the professional line. We have to, quite literally, take Clinton’s word for it.

Look, this is all very simple once you get past the mendacious denials and the B.S. obfuscation: Hillary Clinton went through a lot of trouble to set up a private e-mail system so that she would be immune from things like FOIA requests and so the Obama White House wouldn’t be able to see what she was doing and who she was doing it with. And working through that private e-mail system allowed her to conduct foreign policy not for the benefit of the United States of America but rather for her own clients – who paid for access and action by donating money to the influence-peddling scam shop known as the Clinton Foundation and dropping large sums of money on her husband so he could give boring, prattling speeches as a cover for the bribe money.

And she was able to carry on that ruse for four years because the Obama White House was pure amateur hour when it came to actually running the country rather than weaponizing government agencies against people who disagree with the president.

Any prosecution of Hillary Clinton on her e-mails wouldn’t even need to result in a trial, because she has no possible defense to clear, unmistakable and brazen violations of federal law so numerous as to be staggering. Such a prosecution would quickly result in a plea-bargain with the Clintons begging not to be sent to federal prison. And THEN there is the further corruption associated with the Clinton Foundation, that the scandalous conduct with her private e-mail was an attempt to cover for, which is even worse than the e-mail. Much worse.

Of course, the further aspect of this was the total lack of security within the e-mail server she was working from, which in all likelihood resulted in the Russians, Chinese and whoever else might have wanted to hack into her e-mails doing exactly that. We have no idea the damage she did to U.S. intelligence by having so much classified information open to our enemies to read.

This woman ought to be spending the rest of her life in federal prison, and her husband – who is becoming so decrepit that he could be confused for one of the White Walkers from the Game of Thrones series – could probably join her.

We’re heavy critics of Donald Trump around here, and Kevin Boyd, Joe Cunningham and I have all said we wouldn’t vote for him, but that doesn’t relieve our profound disgust at the Clintons.

The guess here is my long-standing prediction that Hillary would somehow not end up as the Democrats’ nominee will ultimately prevail. They don’t have anybody else, and they absolutely won’t let Bernie Sanders be the nominee – which could easily result in Sanders bolting for a third-party run and the destruction of the Democrat Party – but the weight of her criminality is already drowning her campaign, and the time could well come when they decide to cut their losses with her and dump her for a Joe Biden, or Deval Patrick, or a Mike Bloomberg who commits to self-funding a big chunk of the campaign.

– Bernie Sanders has opinions about the humanitarian apocalypse the socialist policies he advocates have wrought on Venezuela, but he would rather not discuss them because he’s focusing on his campaign.

As bad as Hillary is, Sanders – though polls of idiot voters across the country show him to be performing extremely well against Trump – is far, far worse. He’d govern in a manner far, far worse. A. Barton Hinkle, writing at Reason, absolutely nails Sanders in noting that what he’s for is violence and lots of it, which is one reason why the subhuman scum Sanders supporters are starting riots at Trump rallies, but he lacks the stones to own up to it.

In response, Bernie the Magnificent hemmed and hawed and, eventually, denouncedthe violence. “Our campaign of course believes in nonviolent change and it goes without saying that I condemn any and all forms of violence, including the personal harassment of individuals.”

Which, to be blunt about it, is a crock. Sanders’ entire campaign is premised on the idea of violent change—lots of it. His supporters just want someone else to do the dirty work.

Sanders proposes hiking the minimum wage to $15 an hour, which is another way of saying he wants to make it illegal for employers to pay workers less than $15 an hour—even when there are workers who are willing to take less. He also proposes to make employers provide 12 weeks paid family and medical leave, two weeks of paid vacation, and seven paid sick days.

How is he going to achieve all that? By changing the law and then enforcing it. Note the root of the word “enforce.” If a company chooses not to comply the consequences will, eventually, entail the use of armed officers of the law.

Sanders wants to take a blue pencil to the First Amendment to overturn Citizens United. In that case, the government tried to stop a nonprofit corporation from advertising and distributing a movie about Hillary Clinton. This is censorship—and Sanders thinks it is the right thing to do. How does Sanders propose to enforce such restrictions? He’s not going to do it by saying “pretty please with sugar on top.”

Sanders wants to increase spending on U.S. infrastructure by hundreds of billions of dollars a year. Where will the money come from? You, of course. And if you decline to pay? You could end up like actor Wesley Snipes, who went to prison for tax evasion.

Sanders is a fierce opponent of free trade—which is the radical notion that if two parties freely agree to exchange goods or services, nobody else has a right to stop them. Bernie thinks somebody—namely the federal government—should. “The federal government” is a nicer way to say “armed federal agents.”

Sanders wants to “bring climate deniers to justice” and has called for the Justice Department to investigate “climate change skepticism.” (Another ugly attack on the First Amendment.)

Even if the effort goes no further than that, it would entail the threat of force, since the government would have to obtain documents, conduct interviews, and otherwise collect information from people who would prefer not to provide it.

Sanders also wants to “stop dirty pipeline projects,” “stop exports of liquefied natural gas and crude oil” and “increase fuel economy standards to 65 miles per gallon by 2025.” How is he going to do that? By imposing those policies through force.

There are many more examples, but you get the point.

Progressives like to say government is just a word for things we all do together, but that misses a crucial point. Left to their own devices, a lot of people would choose not to do certain things at all—or would choose to do them less, or differently, or with somebody else. Government actually is the way some people get other people to do things without their consent and even in the face of their strenuous objection. If the non-consenting people object too obstinately, the government will bring physical violence to bear. Government is not in the habit of taking no for an answer.

Bernie Sanders at the levers of the American federal government would be the end of freedom, and the end of America. Hillary Clinton would be a terrible president and her impeachment likely assured during her first term. But Sanders would be Hugo Chavez. Don’t let the kooky old man act fool you – he has zero respect for or interest in the principles the country was founded on, and the pursuit of power over his fellow man has been the only interest in his life that has ever lifted him beyond the status of a bum. Someone like that in charge of a great country like this is a terrifying prospect; frankly, so much so that were he to win the great American democratic experiment would necessarily come to a close.

The Democrat establishment knows this, and while they’re often happy to rule over the ruins of, say, a city like Detroit, Chicago, New Orleans, Philadelphia or Cleveland, they know Sanders is enough of an extinction-level event for the country that they can’t be responsible for allowing him to represent their party.

Trump could be the same, but the Republican establishment is a lot less ruthless and a lot less effective in enforcing its will. They don’t have the stones to block him from getting the nomination like the Dems do with Sanders. If and win it’s time to bounce Hillary out of the big chair, they’ll bring in a ringer before they feel the Bern.

– How about a Today’s Last Thing? This is a little different from our usual fare, in that it’s much more urbane and sophisticated.

Too urbane and sophisticated for its own good, it turns out. 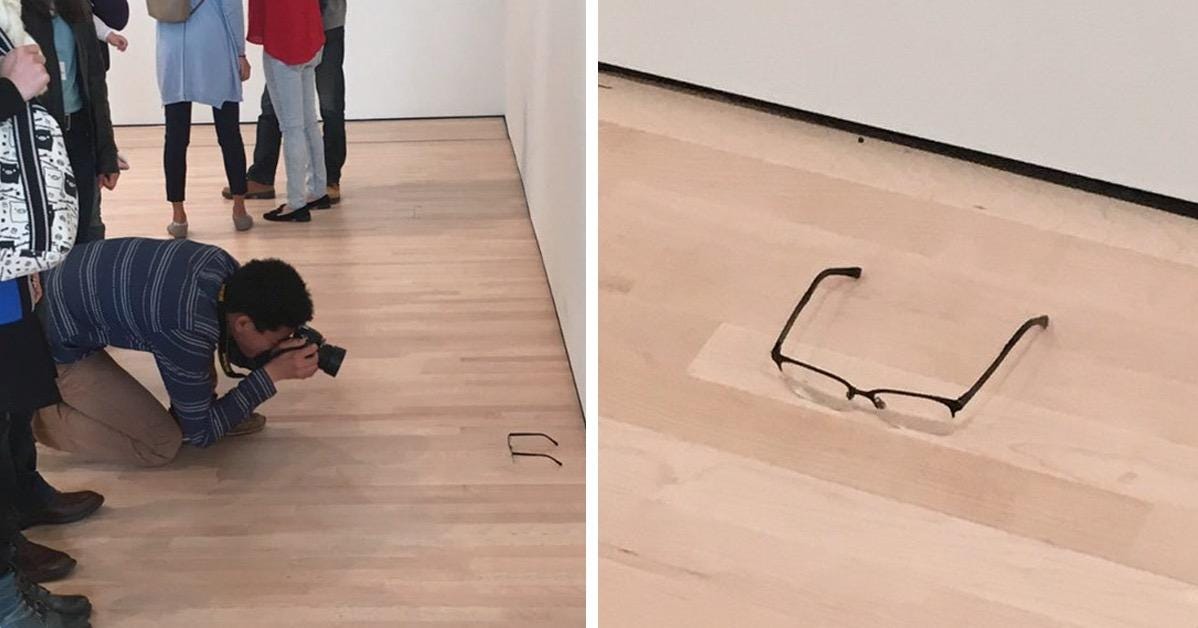 Several visitors to the San Francisco Museum of Modern Art this week were fooled into thinking a pair of glasses set on the floor by a 17-year-old prankster was a postmodern masterpiece.

“Upon first arrival we were quite impressed with the artwork and paintings presented in the huge facility,” TJ Khayatan told BuzzFeed. “However, some of the ‘art’ wasn’t very surprising to some of us.”

“We stumbled upon a stuffed animal on a gray blanket and questioned if this was really impressive to some of the nearby people.”

To test out the theory that people will stare at, and try and artistically interpret, anything if it’s in a gallery setting, Khayatan set a pair of glasses down and walked away.

Soon, people began to surround them, maintaining a safe distance from the ‘artwork’ and several of them taking pictures.

True story, right? The art world has become so devoid of fidelity to what art is supposed to be – namely, the pursuit of truth through beauty – that almost anybody can present almost anything as art and have people fall all over themselves attempting to critique it as such. How else do you explain the prestige afforded Jackson Pollock or Mark Rothko, whose genius consisted largely of recognizing people will buy anything if you tell them to in the right way?