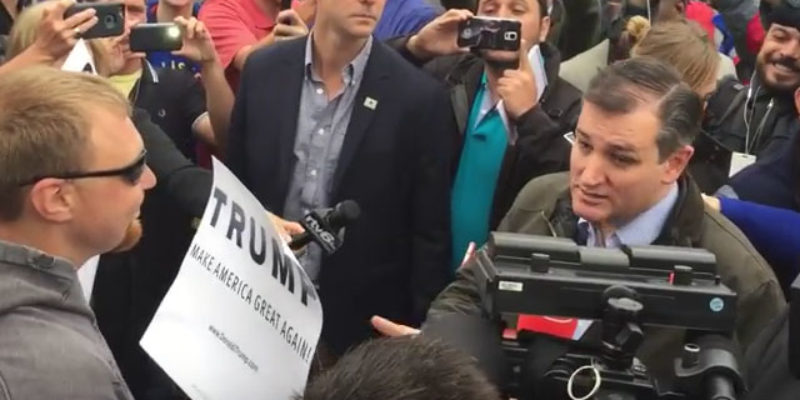 This was at a stop in Marion, Indiana earlier today – Cruz was coming out of a campaign event and there were a half-dozen goofballs outside holding Trump signs, so Cruz went over to talk with them and engage in a bit of a discussion.

The clip goes just under seven minutes and it’s instructive. On one side is somebody running for president who has facts and intellect on his side. On another is a braying, swaying jackass who has nothing but smirks and slogans and epithets to offer. Everything the protestor says, Cruz counters pretty devastatingly and he does it without getting upset or raising his voice.

And Cruz calmly informs the Trump supporter that he’s being taken for a ride by his candidate. There is no effective response given.

The polls in Indiana are all over the place, with a range from a 15-point lead for Trump to a 16-point lead for Cruz. Nobody really knows who’ll win there tomorrow night. But if he doesn’t win and his campaign is finished, Cruz can at least rest knowing he gave it a good run, particularly for a first-time candidate, and if the only way to win an election now is to convince people like the jackasses protesting his event that you’re going to Make America Great Again, then maybe America just doesn’t deserve a president with intellect and facts on his side. Maybe cultural decline is too advanced in this country for someone with merit to win an election.

Trump is now calling Cruz a liar because he noted that Mike Tyson, who endorsed Trump, is a convicted rapist. Which is, in fact, the truth. Speak a truth that Trump doesn’t like and he’ll call you a liar and his fans will believe it.

Interested in more national news? We've got you covered! See More National News
Previous Article The Louisiana Legislature And Governor Edwards Are Negotiating Over How Many Louisiana Jobs To Kill
Next Article UPDATED: As Expected, Fired Band Director Roy King Is Now Suing LSU – And It’s Likely To Be A Brawl Of A Case