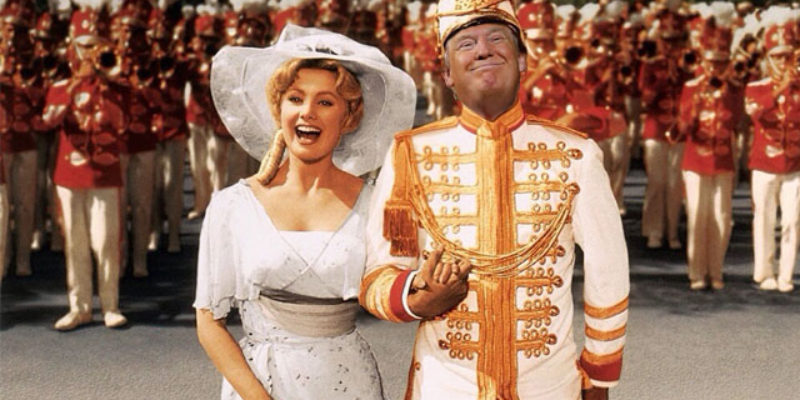 Preston did, after all, become famous for his role as the con artist Harold Hill in The Music Man. And that was a pretty good facsimile for the Trump campaign so far.

You do remember The Music Man, right?

Trump’s campaign report came out yesterday, and it tells us two things.

And Ted Cruz and Ben Carson, who are no longer running for president, currently have more money in their campaign accounts than Trump has in his.

Hillary’s $40 million does NOT include a $23 million ad buy she’s already spent hammering Trump in swing states, with no retort from Trump in paid media…

Hillary and her Super PAC have combined to book $40 million in swing-state ads. Trump hasn’t answered them. Remember when Mitt Romney was defined as an out-of-touch plutocrat by the Obama campaign in May and June of 2012 and couldn’t fight back because he didn’t have enough money until the Republican convention was over? This is even worse than that.

Trump clinched the nomination in May, so his coffers should have been deluged with contributions. How much did he raise in May?

$3.1 million. He lent himself $2.2 million. Hillary raised $26.4 million in May, which is more than Trump has raised for the entire campaign.

And while Trump’s people say they’re going to raise $500 million, which is half what Hillary says she’s going to raise, the fundamentals behind that effort don’t sound like they’re in place. At all.

In an interview with The Hill on Monday morning, a top Trump fundraiser said he and his colleagues had reached a point of deep frustration at the state of the campaign’s money operation.

“Where is the small dollar fundraising? It’s not happening so far as I can tell,” the source said, adding that they were being forced to chasing small dollars because a number of high-net-worth donors were deciding not to support Trump.

The RNC together with the Trump campaign has formed a joint committee that has been raising millions in recent retreats, but most of that money goes to the national party.

Trump ultimately benefits from some of that money because it pays for the RNC’s field team of some 500 staff and its data operations, but by outsourcing much of his operation, Trump leaves himself vulnerable to other people’s decisions if his campaign falls off the rails.

Trump, who claims he is worth $10 billion, insists he’ll fund himself if the Republican Party abandons him, but no senior person on his campaign who has spoken to The Hill believes he’ll make good on that promise.

And second, Trump’s campaign looks more like a swindle than an honest operation.

Trump’s fundraising operation is practically nil, and there’s a reason – the candidate isn’t involved. From a POLITICO piece about how the professional campaign wags inside the GOP are stroking out over his lousy performance…

While Trump had promised Priebus that he would call two dozen top GOP donors, when RNC chief of staff Katie Walsh recently presented Trump with a list of more than 20 donors, he called only three before stopping, according to two sources familiar with the situation. It’s unclear whether he resumed the donor calls later.

But he managed to finance his primary campaign largely on donations rather than via self-funding (the self-funding – $45 million so far – he’s done came from loans he wrote his campaign, and it’s somewhat fuzzy whether he expects to pay those loans back).

And how did he use those donations?

Well, Trump’s single largest campaign expense to date has been with his Mar-A-Lago golf club. He’s paid himself $423,000.

He’s spent $208,000 on those “Make America Great Again” trucker hats, potentially with another company he owns. The hat expenditures dwarf the $48,000 he’s spent to date on data and $115,000 he’s spent on online advertising.

Some 20 percent of what Trump spent in May, not including Mar-A-Lago and the jet, was with Trump businesses…

Recipients of payments from Trump campaign with “Trump” in name, through May 31. Doesn’t include Mar-a-Lago/planes. pic.twitter.com/JF6skaWYGF

And then there’s this…

Looks like the candidate is drawing a salary? pic.twitter.com/3IZrnxMPnK

Most candidates don’t take a salary from the campaign.

And what the hell is this?

This is the address listed for "Draper Sterling," the entity Trump paid $35,000 in May for advertising pic.twitter.com/TnDDf0OPyY

Draper and Sterling were the characters in Mad Men. That’s supposed to be a real ad agency now?

The problem with all this is at some point there will be some actual fundraising. And when there is, what does it go to? Does it pay off the $45 million in loans he’s made to the campaign? If so, he’ll have pocketed, what? A 20 percent profit off the campaign?

Nobody’s ever done this before. Nobody’s run a campaign which is almost explicitly a con on its donors. Lots of campaigns end up wasting their donors’ money; it’s unprecedented, that we know of, to see one actually do it on purpose and for personal gain.

At this point some 48 percent of Republican voters say they want him replaced as the nominee. That 51 percent say they’d like to keep him is not a particularly good retort; the way things are moving the 48 percent could easily become the majority.

This doesn’t have to be the GOP’s fate, you know. The convention is a month away. If the candidate continues performing this badly and making it apparent that the party is about to squander an opportunity to beat the weakest Democrat nominee since Walter Mondale, then the GOP could just sit him down and say “You’re fired.”

That would ruffle a lot of feathers, certainly. But at least the GOP wouldn’t be in a position of getting taken for a ride like Harold Hill took the good folks in River City.

If a boys’ band is going to show up in resplendent uniforms playing Beethoven’s Minuet in G, they’d better start warming up. The folks are starting to recognize the con.

UPDATE: Harold Hill speaks, and he says there’s no trouble in River City…

The month of June represents the first full month of fundraising activity for the campaign and this will be reflected in the June FEC report. The campaign held its first campaign fundraising event on May 25th, 2016. To date, the campaign’s fundraising has been incredible and we continue to see a tremendous outpouring of support for Mr. Trump and money to the Republican Party. The positive response to our fundraising efforts so far is a further indication that the country does not want yet another corrupt politician like Crooked Hillary.

Mr. Trump added, “If need be, there could be unlimited “cash on hand” as I would put up my own money, as I have already done through the primaries, spending over $50 million dollars. Our campaign is leaner and more efficient, like our government should be.”

Interested in more national news? We've got you covered! See More National News
Previous Article Watch This Couple Get Married Underwater At The Aquarium Of The Americas
Next Article The Low Popahirum, June 21, 2016