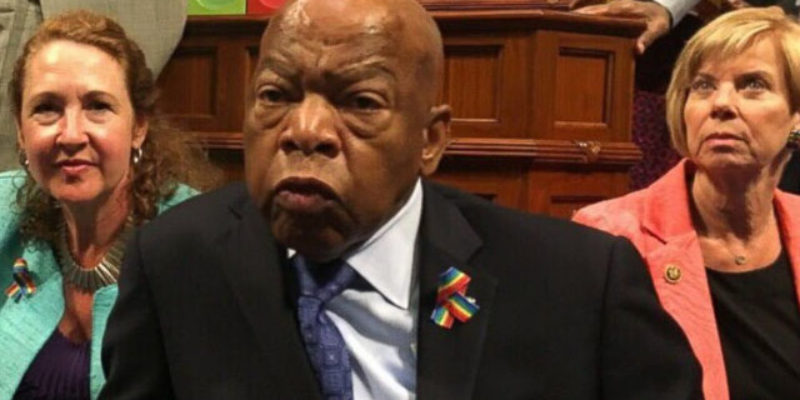 Why? Because they’re unhappy that no gun-grabbing legislation is moving.

Democrats are staging a sit-in on the House floor to push for action on gun control legislation.

Dozens of Democrats were participating in the sit-in after it began Wednesday morning, with some lawmakers seated cross-legged on the floor.

Democrats have been pressing for action on gun control before the House leaves at the end of this week for a planned recess.

Rep. John Lewis (D-Ga.), the veteran lawmaker who was brutally beaten by police in the 1965 civil rights march in Selma, Ala., began the sit-in by giving a speech while surrounded by his colleagues.

“We have turned deaf ears to the blood of the innocent and the deaths in our nation,” he said. “Mr, Speaker, where is the heart of this body. Where is our soul?

“How many more mothers, how many more fathers have to share tears of grief before we decide to do anything?”

Shortly after Lewis spoke, the Democratic lawmakers sat down in the well of the House.

The Speaker, Paul Ryan, did a great job dealing with this. The House gavelled into recess, and since it did that C-SPAN’s cameras got turned off.

And there was no live coverage of John Lewis’ babblings and bad Martin Luther King impressions while sitting on his fat rump. Which apparently as of this posting, he is still doing along with a few dozen of his idiot colleagues.

There was this, however…

At just before noon, Rep. Ted Poe (R-Texas) gaveled the House back into session and led members through a morning prayer and the Pledge of Allegiance.

Democratic members on the floor stood for the pledge and prayer, but would not leave the well of the House after those ceremonies.

“The House is not in a state of order due to the presence of members in the well,” Poe said before asking them to leave.

When he was ignored, he gaveled the House back into recess and the cameras again went dark. Poe’s call for order was barely audible in the chamber over the Democrats’ chants of “no bill, no break!”

“We’d love to show you what’s happening on the House right now but those cameras are controlled by the House,” C-SPAN’s anchor said, shortly after Poe started the recess.

Meanwhile, Hillary Clinton and the sexual pervert she shares a household with are busily tweeting that disrupting the House’s business in order to bitch about a lack of gun-grabbing legislation which wouldn’t attract a majority of votes in favor constitutes “leadership.”

This, one day after the Democrats’ Department of Justice was shamed out of its decision to redact the Islamist declarations of Omar Mateen – and one day after the Attorney General said in a press conference that she doesn’t know where Mateen’s wife, who was his accomplice in buying the weapons he used in the Orlando massacre, knew what he was going to use them for and did not alert authorities (as gun store owners Mateen attempted to buy weapons and body armor from did, to no avail).

They’re sitting on the floor in protest of your right to own a gun. Not in protest of the piss-poor performance of the president they support in supervising competent federal law enforcement.