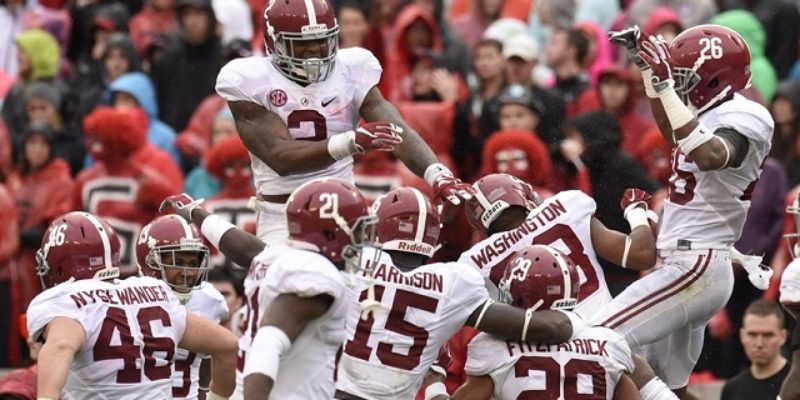 Six Monroe police officers involved in the arrest of two Alabama football players turned up DNA evidence and reported observing high-powered handguns and marijuana in plain view in the suspects’ automobile, as revealed in a Monroe police case file, though Fourth Judicial District Attorney Jerry Jones took a pass at prosecuting the pair.

The six police officers’ reports entail a number of new details in the case, including conflicting statements made by the four men in the automobile, which included the two Alabama football players who prepped at high schools in Ouachita Parish.

The DNA samples and other evidence gathered by police will not be entered as exhibits in a criminal prosecution of Cameron Robinson, a West Monroe product who’s a starting offensive lineman for the Crimson Tide, and Laurence “Hootie” Jones, a former Neville Tiger and currently a backup safety at Alabama.

Original story is below

University of Alabama football players Cam Robinson and Lawrence “Hootie” Jones were facing gun and drug possession charges in Ouachita Parish. Robinson was charged with felony possession of a stolen firearm and both were charged with a misdemeanor of possession of narcotics (marijuana) around a firearm last month. Both players are originally from Monroe.

But Jones told Monroe TV station KNOE TV what was likely the real reason why charges were dropped.

Jones says, “I want to emphasize once again that the main reason I’m doing this is that I refuse to ruin the lives of two young men who have spent their adolescence and teenage years, working and sweating, while we were all in the air conditioning.”

So ordinary people better not have weed or carry stolen firearms in Monroe. But if you’re a hometown football hero, we’re going to let you go. Got it?

Even Alabama-based writers think this is absurd. Kevin Scarbinsky at AL.com slammed Jerry Jones for “mimicking the worst Hollywood stereotype of a Southern district attorney.”

It’s insulting to college football players who don’t have to be bailed out, literally or figuratively, because they chose to hang out in a closed public park in their hometown at 2:33 a.m. in a rental car that contained a small amount of marijuana and two handguns, one of which was stolen.

It’s insulting to countless people who spend their adult years working and sweating for less money in a year than professional football players make for playing a single game – or some college players make for signing with the school of their choice.

It’s also insulting to Robinson and Jones themselves, suggesting an ulterior motive for the decision to let them walk away beyond the weak case the DA apparently had.

It’s not just football players that Jerry Jones gives preferential treatment to. The Ouachita Citizen published a damning expose last month revealing that Jones has crippled an investigation into corruption at the Fourth Judicial District Court. The Citizen found that Jones filed misleading court documents and offered a false account of his communications to investigators. Jones also did not forward a complaint against the court by the Citizen to proper authorities.

Maybe it’s time for Attorney General Jeff Landry to take a look at what’s going on in the Ouachita Parish DA’s office.

Interested in more news from Louisiana? We've got you covered! See More Louisiana News
Previous Article Mother Beats Her Kids After She Catches Them Burglarizing A House, Gets Sent To Jail For It
Next Article There Are Elected Morons Sitting On The Floor In The House Of Representatives