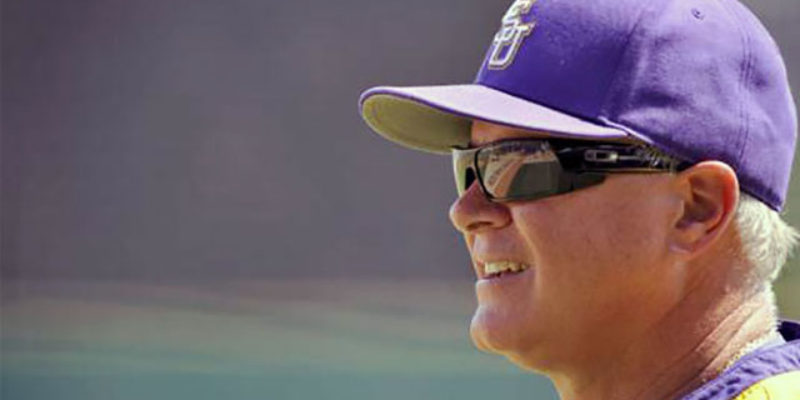 The classic song in question? You could have guessed this without help…

Last night LSU’s heretofore-overachieving baseball team dropped an ugly 10-6 contest to Rice, setting up an all-the-marbles contest this afternoon at 4:00 to determine whether the Tigers still have a season left in 2016.

And Mainieri particularly is under pressure to keep the season going, because if LSU doesn’t win today he’ll be stuck with a long offseason full of griping from the fans.

He doesn’t really deserve that criticism, mind you. Mainieri has pieced together a shockingly good season out of a team which had to replace eight of nine starters from last year and withstood pitching slumps from both of its ace hurlers over the course of the season. To be 44-19 and a national top-eight seed playing to go to a Super Regional today is actually a pretty good resume for a season all to itself.

But that’s not how it works at LSU. At LSU good seasons end in Omaha, not Baton Rouge. That’s true no matter how many starters you have to replace. And if today goes badly Mainieri will be a victim of his own success. If you can take three games out of five from Florida toward the end of the season, how come you can’t take two of three from a team that finished fourth in Conference USA and lost three of four to Louisiana Tech?

That isn’t fair analysis, of course, as while Florida might well be the best team in the country they’re not hitting throughout the lineup the way Rice did yesterday. The Owls turned out to be the hottest set of bats in America just in time to give LSU’s head coach heartburn. But nobody will care about that if LSU loses today’s game; it’ll be Mainieri’s fault.

And a key reason for that doesn’t even revolve around this year. One thing you can’t have as a coach of a spectator sport is a repeating pattern defining your failures – when you fail, it needs to be for new reasons so the fans don’t perceive your limitations.

And should Rice finish LSU off this afternoon the fans are going to see a pattern. They’re going to remember that in 2014, just two years ago, another team from the city of Houston came into Alex Box Stadium, and in almost identical circumstances lost the winner’s bracket game to LSU amid a mammoth performance from the Tigers’ ace pitcher, only to roar back out of the loser’s bracket and feast on LSU’s secondary pitchers on the way to stealing the regional. That 2014 opponent was Houston, not Rice, but otherwise the circumstances were eerily similar to these.

Except this is a little worse, because Houston that year was actually a bit more impressive than Rice this year. After all, the Cougars left Baton Rouge in 2014 with a gaudy 48-16 record before dropping a pair of games in a Super Regional at Texas. Rice is now 38-23, which looks a good bit worse.

It will be noted that Mainieri’s teams also have a pattern of postseason struggles going back several years. His 2008 and 2009 teams, both of which made the College World Series and in 2009 actually won the national championship, thrived in the postseason, but since then there is a not-unfair perception that in regionals, super regionals and in Omaha when LSU has gotten that far the Tigers have been more prey than hunter. Last season, with a team largely regarded as the best LSU has had since the 2009 title team, the Tigers had to grind out a series of nailbiters in regionals and super-regionals – against UNC-Wilmington and UL-Lafayette, by the way, opponents who despite obvious quality weren’t “name” foes like some fans would have expected to put up such a fight – before getting drummed twice in the CWS by TCU. In 2014 there was the flameout against Houston. In 2013 there was the two-and-BBQ finish in Omaha for a team that looked loaded for a title run. In 2012 there was the Super Regional disaster against Stony Brook.

LSU wouldn’t be the only team whose fans perceive to have flamed out at the end of a season; every tournament team but the national champion loses their final game. But in each of those years it can be said LSU played considerably better in the regular season than in the postseason, and Mainieri already has a bit of a rap for that pattern. It would do him some justice to put a dent in it.

And he’s under pressure for one other reason, this one more proximate than the historical patterns playing out at Alex Box. Namely, Mainieri made the decision to start Jared Poche on Friday against Utah Valley, which at the time seemed a curious call. Typically speaking, if you’re a top seed playing a #4 seed you don’t want to start your first or second pitcher. But for a number of exceptional circumstances, strategically it’s not a great idea to use up one of your best arms so early.

And Utah Valley didn’t represent an exception; they were a team without a dominant pitcher of their own, while they had a little bit of offense there was nothing particularly formidable to their lineup and they weren’t a team familiar with the playing conditions and atmosphere of the Box. Starting a Caleb Gilbert, Riley Smith or John Valek against Utah Valley would have been appropriate. Starting Poche was overkill, and given that LSU lit Utah Valley up for seven runs and probably could have had more if they’d needed, the gem of a performance the junior put on against the Wolverines was largely wasted – in particular, given how badly LSU could have used it last night.

If his team loses today Mainieri will be hearing about that decision for the whole offseason. And he’ll be hearing about how it’s been two years since he’s managed to get to the postseason with a dependable third starter, and why can’t a head coach with LSU’s recruiting resources and the best pitching coach in the country in Alan Dunn develop one.

The best way to avoid all this, of course, is to win. And but for the obvious momentum on Rice’s side, Mainieri has reason to believe he’ll be able to do that.

There are two reasons for optimism. First, LSU has a lot of pitching left. Mainieri hasn’t named a starter yet as of posting time, but he did mention that Poche was an option; he threw 92 pitches on Friday, and a non-power pitcher on three days’ rest is doable for a short start. He’s also got Jake Latz, who is quickly working himself up to the point where Mainieri would turn him loose for extended duty. Parker Bugg hasn’t pitched yet this weekend. Hunter Newman has only thrown one inning and could be ready for extended duty. Russell Reynolds is fresh. John Valek could easily pitch extended innings. Really, almost everybody on the staff save for Alex Lange is available. If LSU is going to cool off those Rice bats, today would be the day when the staff has the arms available to do it.

And while Rice is unquestionably a hot team, they are really out of arms. Their Friday starter Blake Fox, who is 5-7 with an impressive 2.69 ERA on the season, threw six innings on Saturday against Southeastern Louisiana before the game was rained out; it’s basically malpractice to bring Fox back on two days’ rest, but Rice head coach Wayne Graham used his closer Glenn Otto last night for more than 70 pitches after having thrown him for three innings and 41 pitches the previous day. It’s reasonably fair to say Otto, who’s the only Rice pitcher LSU hasn’t feasted on so far, is done for the regional. Rice’s staff is not deep, and they’re essentially spent at this point. Short of a miraculous performance from a little-used and unheralded arm, it’s Fox for as long as he can go and then the hope that LSU pops up a lot while Rice outscores them.

Nevertheless, the pressure is on. Mainieri is calling for all hands on deck, including every rally possum he can find. It would be sad if such an impressive coaching job this season devolved into an offseason full of complaints.