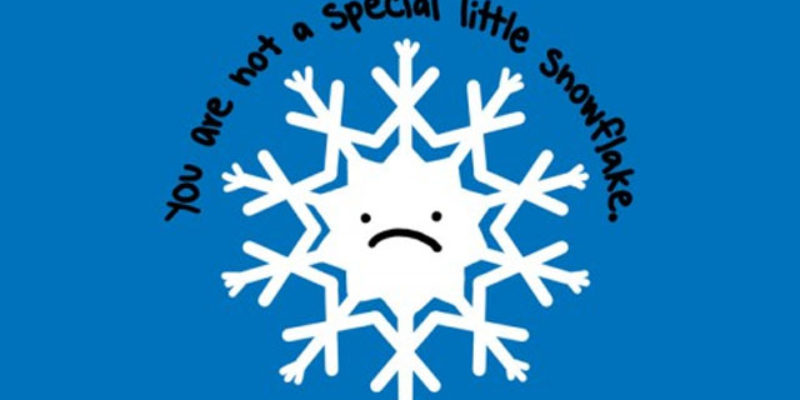 First the story, which appeared at the Ask A Manager website (sort of a Dear Abby for the corporate world), and then our reaction…

I was able to get a summer internship at a company that does work in the industry I want to work in after I graduate. Even though the division I was hired to work in doesn’t deal with clients or customers, there still was a very strict dress code. I felt the dress code was overly strict but I wasn’t going to say anything, until I noticed one of the workers always wore flat shoes that were made from a fabric other than leather, or running shoes, even though both of these things were contrary to the dress code.

I spoke with my manager about being allowed some leeway under the dress code and was told this was not possible, despite the other person being allowed to do it. I soon found out that many of the other interns felt the same way, and the ones who asked their managers about it were told the same thing as me. We decided to write a proposal stating why we should be allowed someone leeway under the dress code. We accompanied the proposal with a petition, signed by all of the interns (except for one who declined to sign it) and gave it to our managers to consider. Our proposal requested that we also be allowed to wear running shoes and non leather flats, as well as sandals (not flip-flops though) and other non-dress shoes that would fit under a more business casual dress code. It was mostly about the footwear, but we also incorporated a request that we not have to wear suits and/or blazers in favor of a more casual, but still professional dress code.

The next day, all of us who signed the petition were called into a meeting where we thought our proposal would be discussed. Instead, we were informed that due to our “unprofessional” behavior, we were being let go from our internships. We were told to hand in our ID badges and to gather our things and leave the property ASAP.

We were shocked. The proposal was written professionally like examples I have learned about in school, and our arguments were thought out and well-reasoned. We weren’t even given a chance to discuss it. The worst part is that just before the meeting ended, one of the managers told us that the worker who was allowed to disobey the dress code was a former soldier who lost her leg and was therefore given permission to wear whatever kind of shoes she could walk in. You can’t even tell, and if we had known about this we would have factored it into our argument.

I have never had a job before (I’ve always focused on school) and I was hoping to gain some experience before I graduate next year. I feel my dismissal was unfair and would like to ask them to reconsider but I’m not sure the best way to go about it. Any advice would be greatly appreciated.

Let’s just call this The Great Massacre Of The Interns.

But another way to describe it would be “education.” And sorely needed, at that.

I can’t tell you how often I hear from friends who also own businesses what a complete disaster the millennial generation is from the standpoint of workplace behavior. Never before has there been a generation where a parent will show up to a job interview or make a follow-up phone call on behalf of their child (and “child” being a key word here), and never before has there been a generation so lacking in “soft” job skills.

And this is a great example of “soft” job skills being missing.

No, the workplace is not a democracy, and no, you as a 21-year old intern don’t have the right to vote in it. You’re an intern. They brought you in for the summer on, at best, a tryout. They’re not interested in your ideas, and they’re absolutely not interested in your comfort or aesthetic preferences. You do as your told, and you say “Yes sir” and “Yes ma’am” with a smile as you’re doing it.

What you do not do is circulate a stupid petition asking to wear Nikes to work in contravention to the dress code because the wounded warrior at the office gets an exception to the dress code. When you do this, you make yourself a pain in the ass not worth having around. And the boss will enjoy running you off, because your petition (1) makes his head hurt and (2) induces him to buy retirement property in Costa Rica so that he doesn’t have to live in this country in 20 or 30 years when your generation is running it.

There are lots of people to blame for this story not being all that uncommon. Obviously the parents of this generation are, in general, completely incompetent. Along the way someone inculcated in Americans the idea that being a father or mother involves being a pal to one’s children, and whoever that someone is needs to be stood up against a wall somewhere. You’re not your kids’ pal, you’re their parent. And the best expression of love you can give them is to teach them life skills they will need to get along in the world – skills like respect for one’s elders, respect for the rules, hard work, selflessness, solving one’s problems through consensus rather than violence, showing up on time, coachability and not running off at the mouth when one has no idea what one is talking about.

Not everybody in the millennial generation has these problems, but more of them do than any generation before, from what it seems. And that comes from bad parenting.

But it also comes from our culture. All of the soft skills listed above? Here’s a thought experiment – think of a movie or a TV show in which the lesson from the story is the importance of one or more of them. If anything, TV and the movies actively downplay or even attack them. It’s beyond a cliche’ in film and TV that the adults, and particularly the fathers, are morons and the kids are the smart and capable ones. When hard work is depicted, it’s almost always in the manner of a montage of difficult tasks, as if to say “Yeah, yeah, he works hard to learn how to do this thing he needs to do, but that’s boring and we’re not going to waste time on it.” And when was the last time the great conflict in a movie or TV show was resolved by the hero and the villain coming to a compromise or an accord both sides could live with?

This is the most TV’ed and movie’d generation in the history of the world. They’ve been raised by Hollywood. Look how Hollywood raises its own kids; what kind of job do you think it’ll do raising yours?

Do the schools teach soft skills to the kids? Some do. But most don’t. As an example, it used to be that conflict resolution in schools involved boxing gloves and a wrestling mat. Now? The schools demand the kids report everything to the authorities, and hire bureaucrats to sort out petty disputes. That’ll teach them to resolve their differences without Big Brother getting involved, sure. Let’s ask middle managers in companies across the country how they like the entry-level peons coming into their offices asking for help in dealing with personal disputes with mean colleagues.

And law and politics certainly doesn’t help. You’ve probably seen the story from here in Baton Rouge which hit last week, in which a single mom struggling to hold back the tide of a poisonous culture on the tube and in the streets was horrified to find out that her kids had burglarized a neighbor’s house. Her reaction was to institute corporal punishment, which is absolutely reasonable in such a case because someone has to get through to the little wildlings this kind of behavior won’t be tolerated. And naturally, she ended up in jail for child abuse. A society which reacts in such a way is a society which will return very bad results in the young adults it produces.

And you’ll get far worse than stupid petitions from special snowflake interns who think bothering the boss about wearing running shoes in the office is an appropriate use of company time.

Kudos to the boss for firing the lot in the story above. That’s the best lesson most of them have yet learned about the real world.