See below for updates.

Today’s the first day for qualifying in November’s elections. There are five big races that are being watched in particular: the 3rd and 4th Congressional Districts, the U.S. Senate race, East Baton Rouge Mayor-President, and the State Representative from the 80th District.

Here’s who is in so far.

Republican Polly Thomas is the only candidate that’s qualified so far for the 80th District race.

Meanwhile in the 1st District Congressional race, Steve Scalise has qualified for reelection. No David Duke, yet. Garret Graves has drawn opposition from Richard Lieberman, a Democrat from LaPlace, in the 6th Congressional District.

The Libertarian candidates in the U.S. Senate race are interesting. Le Roy Gillam has been described to me by a state Libertarian Party official as comparable to Cornell West. He’s a left-leaning libertarian focused on civil rights issues. He’s more or less the Black Lives Matter candidate. His opponent is Thomas Clements, who also ran for president this year.

The rest of the races are progressing more or less as expected.

UPDATE 2:41 PM: Again, no real surprises so far. The only major candidates who haven’t qualified yet in the races we’re watching are Rob Maness for U.S. Senate, Clay Higgins for U.S. Congress 3rd District, and Mike Johnson in the 4th District.

3 candidates have qualified in PSC District 4. One of them is Patrick Richmond who seems to be very vocal about crime and immigration. Not really sure what has to do with the PSC though. The other Republican in the race is Reldon Owens, a LABI director and Marketing and Sales Director for Diamond D Construction. They build railroads.

But Owens might want to get a new social media guy. 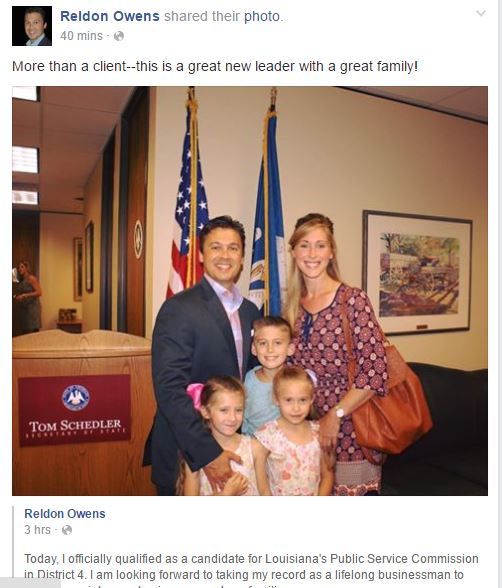 Whoops! The point of a candidate’s social media is to make it like the candidate is talking to the voters, not for a consultant to brag on themselves.

In either case, none of these guys scream “walks with us” for conservatives. Richmond is running as a populist Tea Party guy and Owens is a chamber of commerce type guy. Welcome to 2010.

They’re both facing off against a Democrat, Mary Werner.