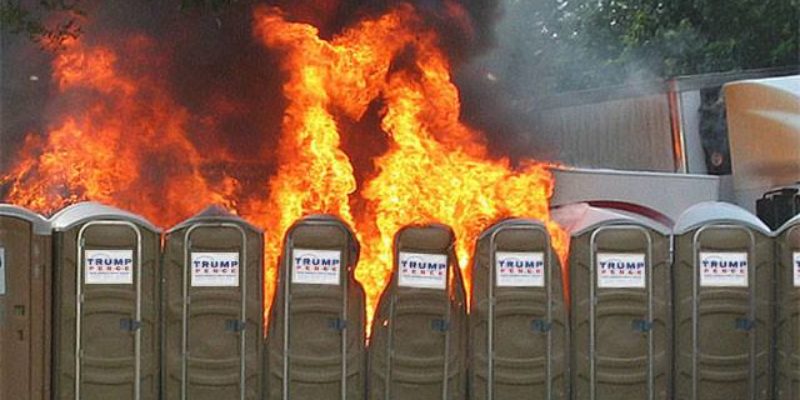 UPDATE: We know what courage is and it’s Ted Cruz. He went into the lion’s den and kicked Trump right in the balls.

Cruz did it with three simple words, “vote your conscience.” He told the audience to vote for candidates who support the Constitution and liberty, “up and down the ballot.”

Before that though, he systematically dismantled Trump’s entire agenda. It was beautiful.

First up, Donald J. Trump Jr.’s speech was good. Donald Trump’s kids are probably his greatest political asset. It seems like the GOP convention is finally starting be a non-embarrassing event. Wrong.

The non-politicians helped Trump’s cause more than the politicians did. Paul Ryan gave a well-received speech, but Mitch McConnell was completely forgettable. Ryan’s problem is that by completely selling out to Trump, he has lost most of his credibility.

The politician though that won the title of most embarrassing on the night was Ben Carson. His speech was a weird rant that you would normally find at Free Republic. Carson has been one of the biggest disappointments of this election cycle.

Meanwhile, the Melania plagiarism story just won’t go away. Today, the Trump campaign tried to throw under the bus a writer in his corporation, blaming her for the speech. However, it maybe a violation of campaign finance law:

“My name is Meredith McIver,” it began, “and I’m an in-house staff writer at the Trump Organization.” McIver explains how she was working with Melania on the speech when the candidate’s wife read out some passages from Michelle Obama’s 2008 convention speech. Those passages were then accidentally included in the draft Trump used, for which McIver, later in the note, apologizes. Done and done; the truth has come out.

If Trump used corporate resources to write a political speech, that could be illegal.

“On the face of it, this looks like a corporate violation,” explained Lawrence Noble, general counsel for the Campaign Legal Center. And that is “a violation of federal law. It can result in civil penalties to the corporation and the campaign.” If the campaign used corporate resources “willingly and knowingly,” the offense is a criminal one.