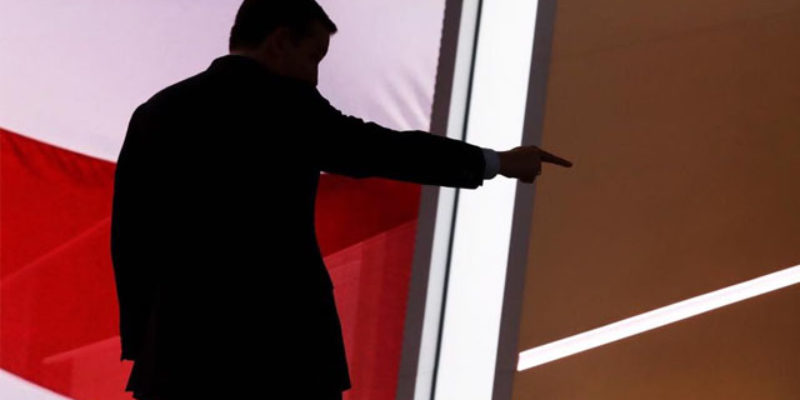 If you’re Melania Trump or her speechwriter, you almost want to hug Texas US Senator Ted Cruz.

The “speech lift” from Monday night seemed to be the story of the 2016 Republican National Convention before Trump’s main rival ambled on to the podium on Wednesday night.

It was obvious since the New York real estate developer became the de facto nominee that Cruz believed two things: 1) Trump was going to tank and 2) Cruz was Reagan 2.0.

The mercurial Donald would take care of the first part while the latter was in Cruz’s hands.

Cruz saw that 2016 was 1976, with Trump playing Gerald Ford and Cruz assuming the role of the hard charging insurgent conservative running second in the primaries and at the convention, then swooping in as the savior of the GOP and American in the next election.

Reagan ’80 unofficially began in the closing moments of the 1976 Republican National Convention in Kansas City when President Ford summoned the Gipper to join him on stage to say a few words.

Ford intended the invitation to be a means of unifying the party and to link the popular Reagan, who lost the nomination by 117 votes, to his re-election.  As Reagan was an active candidate for the presidency going into the convention, he was not set to address the delegates and would do so only to accept the party’s nomination.

With no notes and with no more preparation than examining his thoughts in the stroll between the skybox and the stage, Reagan gave a mesmerizing speech that electrified the arena and left the impression on the delegates that they had nominated the wrong candidate.

In contrast, Cruz had a featured slot, as his active candidacy having been suspended two months prior.

The stage was set for Cruz to lay the foundation for his own Reagan come back with a memorable speech.

Walking on to the podium framed by images of the Constitution, Cruz was warmly received, even by the New York delegation.  In fact Cruz had to delay the start of his address because he had received a 45 second ovation.

Reading his prepared remarks loaded with applause line pauses from a teleprompter, Cruz teased an endorsement in his opening minute by congratulating Trump on winning the nomination but then communicated a tell by following that up by expressing his hope that conservative principles triumph in November.  That he differentiated the two was initially lost on the delegates.

Cruz then talked about one of the Dallas policemen gunned down for a few minutes, segueing that into a general talk about freedom and then went on an attack on the Obama Administration’s foreign policy.

Half way through his time, Cruz began running through a list of domestic policy criticisms of Obama and Hillary Clinton.

At the 15 minute mark Cruz referenced building a wall to keep the country safe, yet another tease he was going to announce for Trump.  Moments later Cruz hit on another signature Trump area, ensuring that trade deals are favorable to domestic farmers and manufacturers.

However by this time the audience wasn’t as boisterous. The audible cheers had been replaced with light clapping 16 minutes into his speech.  People began to suspect they are getting rick-rolled.

Cruz continued to rhetorically meander for the next three minutes when he beseeched people to not stay at home in November.

The crowd’s energy began to rise in anticipation, after almost twenty minutes of buildup, Cruz had laid the expectation that the next words out of his mouth would be an endorsement of Trump.  Cruz paused for effect, stared ahead, nodded, and swallowed.  His 15-seconds of body language signaling the party unifying climax.

He said something else instead.

“Stand, and speak, and vote your conscience, vote for candidates up and down the ticket..”

The Cruz people claim that at this point the Trump whips on the floor instigated a “We want Trump” chant.

The truth is, the folks in the convention hall didn’t need instructions from a young man in a blazer and neon yellow hat.  In a frenzy, they were going to say the words for Cruz, as if trying to will the endorsement out of him.

And then Cruz decided to stir the pot by ad-libbing.

“I appreciate the enthusiasm of the New York delegation.”

Cruz followed that up with a smirk in their direction and then began repeating his standard stump lines about his mother and his father as the delegates began murmuring in confusion.  Cruz had been speaking for over 21 minutes.

All of the speaker’s addresses were rolled on a large television monitor in the rear of the hall, facing the podium and folks began to notice that Cruz’s speech had not just already ended, but concluded without an endorsement.

Bewilderment turned to anger.  By now everyone knew they had been had and played for fools by Cruz, and unbound their instinctual displeasure without assistance from Trump’s floor whips.

Bronx cheers began to rain down from delegates who reside nowhere near the state of New York as a smirking Cruz, reveling in his role as the heel, listlessly ran through his final words as if on autopilot.

There may have been many people walking out of the Quicken Loans Arena wondering if they had nominated the right candidate but nowhere near a majority thought that right candidate was Ted Cruz.

In 1976 Reagan used his spontaneous convention opportunity to inspire and establish pole position in 1980. True, at no point did Reagan say the words “vote for the president” but sharing a stage with Ford and referring to Bob Dole as the “vice-president to be”, the Californian deftly handled the situation leaving the impression that he was behind the ticket.  If Ford didn’t win, it wouldn’t be Reagan’s fault.

In contrast, Cruz used his scheduled speech to bait, tease, taunt, and antagonize.

As Trump knew that Cruz wasn’t going to endorse him in advance, having reviewed the speech, the folks Cruz angered were Republicans hoping to see the party brought together (something Marco Rubio did in a brief video).

He would have done the GOP and his political aspirations major favors if he had stayed home.