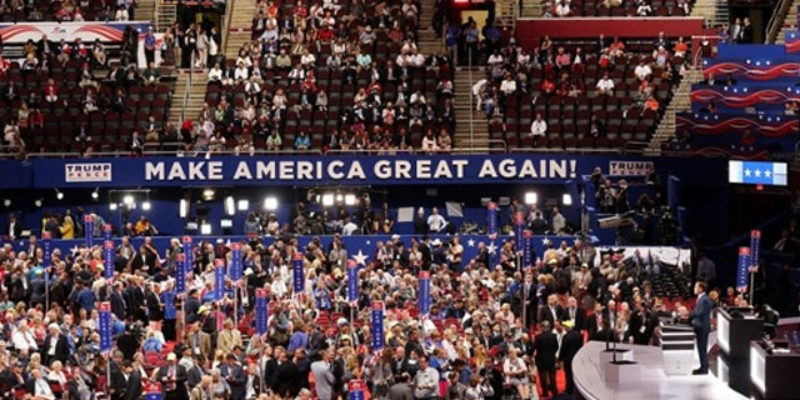 The 2016 Republican National Convention opened up in the House of LeBron on Monday afternoon, the hall splashed in red, white, and blue and the presumptive nominee’s name and his signature slogan, “Make America Great Again!”

Division of the House

The kickoff session provided a peek into the divisions within the party by the more conservative elements of the #NeverTrump faction, as they attempted to prevail on a rules fight that was waged unsuccessfully in a prolonged Rules Committee meeting a few days ago.

The big issue was whether there should have been a roll call vote of the states on the rules or whether the voice vote adoption would be sufficient. While many of the delegates inside the Quicken Loans Arena are not necessarily enamored with Donald Trump, party officials generally avoid rocking the boat, hence the broad leeway many nominees enjoy with convention and party operations.

The presence of floor whips sporting communication ear pieces and neon hats pacing alongside state delegations are both a visible deterrent to states thinking about defying the campaign apparatus and if need be actively lobbying state party leaders to keep their states in line.

It’s very likely that the roll call would have done the opposition no favors, making their defeat that much more humiliatingly official.

Simply put the way to change the rules is to win the nomination. For all practical purposes, the rules of the convention were settled in the Indiana primary: they would be whatever the Trump apparatus say they would be.

However part of the frustration was the heavy-handed manner by which the Romney people rammed through drastic changes to the rules at the previous convention and how the presiding officer from 2012 accepted the voice vote as if it were unanimous though it was hard to tell which side prevailed, in part because floor whips (who cannot participate in votes as they are not delegates) lent their voices to the vote (they did the same in 2016).

The media tried to exploit the procedure battle as a serious division within the party though in truth it wasn’t that relevant in the grand scheme of things.

Trump promised a different convention and though it has been relatively short on star power (unless you count Willie Robertson of Duck Dynasty fame and Scott Baio of Happy Days) it marked a departure from the more nuanced attacks against the Democrats featured at previous conventions, boldly challenging the Democrats on the consequences of sanctuary cities, Hillary Clinton’s handling of the Benghazi attack, and America’s diminished status in the world.

Baio decried how America has changed but not for the better. Former Navy SEAL Marcus Luttrell, whose book about his service in Afghanistan was made into the movie Lone Survivor, delivered an authentic address that touched on the lack of quality treatment for those who served our country by the Veterans Administration.

Pat Smith, the mother of IT consultant Sean Smith who died in the terrorist attack at the US diplomatic compound in Benghazi, laid into the ex-Secretary of State over the initial public claim by the Obama Administration that the raid was instigated by a YouTube video.

And after weeks of being blasted as a racist in the media over his criticism of Black Lives Matter, former New York City mayor Rudy Giuliani thundered his response from the podium of the convention hall, blasting the forces of national division and vilification of law enforcement.

Former US Senator Bob Dole made an appearance at the convention, sitting in the VIP area next to presumed vice-presidential nominee Mike Pence. Upon being recognized the 92-year old wounded World War II veteran was literally lifted from his seat to acknowledge the applause from the crowd. Dole is the only Republican nominee attending the 2016 convention, as both ex-President Bushes and 2012 nominee Mitt Romney are refusing to support Trump. 2008 GOP nominee John McCain, who is no fan of The Donald, is citing a tough nomination battle for his senate seat as his reason for skipping.

Though he’s not a former nominee, there is another notable absence: Ohio governor John Kasich. Kasich publicly argued last August that he should have been invited to the main debate stage at the Quicken Loans Arena as he was the sitting governor of the state hosting the convention, which likely resulted in his inclusion at a time he was polling below 2%.

Ironically the defeated presidential aspirant doesn’t want to have anything to do with the convention, even though he is the sitting governor of the state hosting the convention. And then there is the matter of the endorsement pledge he signed…

As part of her formal introduction to the American public the Slovenian-born fashion model and potential first lady talked about growing up in Communist Yugoslavia and what her calling would be if her husband were to be elected to the presidency. Unfortunately the more relevant segments of her speech are overshadowed by the rhetorical parts that did not come from her life experience but from a speech delivered by Michelle Obama with a pinch of Rick Astley’s “Never Going to Give You Up.”

And while the internet magpies will engage in snarky hashtag frenzy, the greater problem is what these errors say about the already suspect Trump operation and the consequences of “winging” a presidential campaign.

Mistakes such as this aren’t isolated but are indicative of root problems that will give birth to other more embarrassing situations in the future.