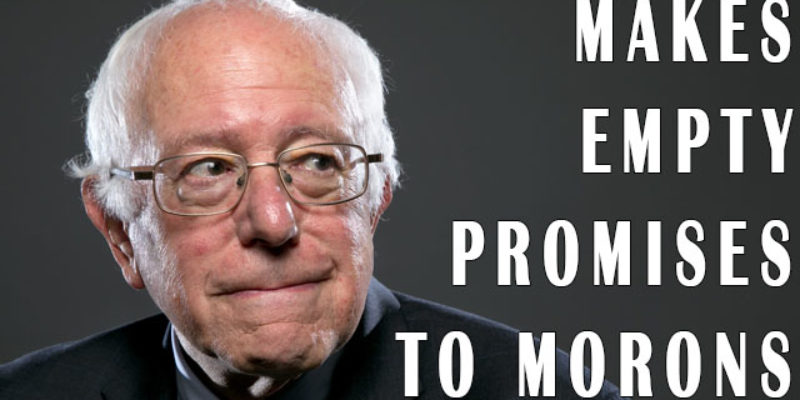 Kevin Boyd is going to have a full wrapup of the first day of the Democrat convention in another post this morning, complete with the chaos and lunacy in the hall and the weird character of the no-name speakers (including the illegal aliens speaking at the convention and the violation of federal law the Democrats committing by having them speak).

I have just one thing I’d like to focus on in this post, which is that the Democrats’ two Hard Left “stars,” namely Bernie Sanders and Liz Warren, are fundamentally unserious people no sane person should ever support, and they illuminated that in technicolor while speaking last night.

Warren followed Michelle Obama, who delivered a better version of her usual “I’m so put upon and face so much adversity that you should forget I’m the First Lady” speech, complete with the cultural Marxist statement that she wakes up every day in a house built by slaves. And there was no way to vomit more bathos to the crowd than the First Lady, so Warren instead went with pathos and made her entire speech a broadside against Donald Trump.

As you might expect from Warren, two things were invariably true. First, the attacks came from a Loony Left perspective. And second, Warren showed that her hypocrisy knows no bounds.

“We’re here tonight because America faces a choice,” Warren said. “On one side is a man who inherited a fortune from his father and who kept it going by cheating people, by skipping out on debts. A man who has never scarified anything for everyone. A man who cares only for himself, every minute of every day.”

Certainly you can make the case that Trump’s business career has been marked by some sharp dealing with creditors, suppliers and so forth, but coming out of Warren’s mouth one doesn’t get that she’s complaining about the specifics of his actions. This is the woman who invented the whole “you didn’t build that” narrative Barack Obama picked up and used against Mitt Romney four years ago, after all. Rather, one gets the impression that a private sector career is tantamount to “cares only for himself.”

It’s boob bait for Democrat base voters, a disproportionate number of which are either unionized public-sector employees or collect an entitlement check. They’re not involved in the productive economy, and so they can delude themselves into thinking that capitalists are rapacious plunderers out to cheat people. And Liz Warren is happy to fuel those fires and trash free enterprise.

She could have complimented Trump on some of his business successes and then ask at what cost those successes came. She could have talked about how Trump’s bankruptcies have dried up his ability to secure financing from most American banks and his current financial model involves investors largely from overseas (and Russia in particular), which would be an attack on Trump’s business performance rather than a general assault on real estate developers. She could have talked about the USFL and Trump Steaks to demonstrate that he has a string of failed ventures.

She could have said Trump, despite his skills at self-promotion, is a bad businessman. But she didn’t say any of that. Instead, she left the hanging, unmistakable impression that she thinks all businessmen are bad people. And the Democrats in the hall liked that.

The next thing she said they didn’t like all that much.

That’s when the Bernie Sanders dunces in Wells Fargo Arena started heckling her with chants of “We trusted you!”, a reference to the fact that Warren had endorsed Sanders and then flipped to Clinton when the primary race ended. That marks her as a sellout where those people are concerned, and the rest of her speech was an exercise in trying to talk over the rather impolite special snowflakes attempting to shout her down.

And the speech itself then became an exercise in slinging bromides against American capitalism in hopes that the audience would applaud. For example, “There’s lots of wealth in America but it isn’t trickling down to hard working families like yours. Does anyone here have a problem with that?”

And finally, a reference to the DNC talking point about Trump’s speech Thursday the media parroted – that it was a dark, foreboding view of America. Warren restyled that narrative for her own words and called Trump’s America “an America of fear and hate, an America where we all break apart.”

This after 20 minutes of trashing capitalism. It was a forgettable, unserious and loony speech. 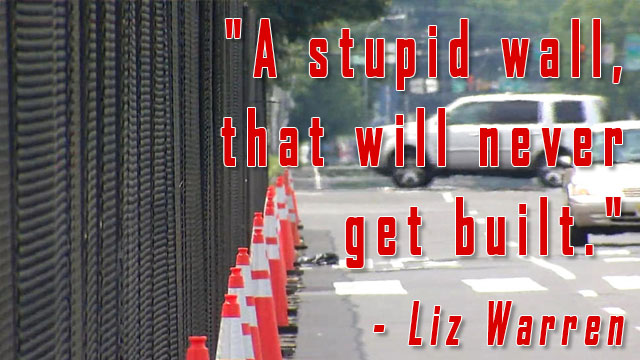 Yes, that’s the four-mile long fence the Democrats have erected outside of the convention venue. You can’t get inside the Great Wall of Philadelphia without showing photo ID, by the way, so there’s the merit of Warren’s complaints about voter ID laws.

And what made the speech so especially devoid of quality was Warren’s blatant hypocrisy. She spent a good deal of time bashing Trump for his quote at one point that the housing crash was “good for people like me” because it made real estate prices lower and softened his acquisition costs, which is a nice leftist trope with one problem where Warren is concerned – namely, that she made a nice chunk of her fortune by buying foreclosed houses and flipping them for a profit. Talk about not telling the whole truth.

Not to mention Warren’s brief flirtation with her own curriculum vitae. She told the audience she’s a janitor’s daughter from Oklahoma who went to a “commuter college” for $50 a semester and then became a teacher, a professor and a Senator. Except that’s not quite the whole story, is it? That “commuter college” was the University of Houston, which isn’t exactly Podunk State, and the reason she was able to move up the ranks in academia so quickly was the fact that she falsely held herself out to be a Native American; that exercise in pre-Rachel Dolezal racial appropriation made her an affirmative action baby and led her all the way to Harvard Law School, and a salary well into six figures for a soft teaching load – and from there to a Senate seat in Massachusetts.

Warren then had the chutzpah to complain about the high cost of higher education and the necessity that every kid have a shot at a good education. This from somebody who used racial preferences she wasn’t entitled to in order to become an academic version of the rapacious capitalist she decries Trump for being – what’s the tuition at Harvard paying for that six-figure salary these days? – when she doesn’t even support school choice and the opportunity it would give for poor kids to attend good schools and maybe get into Harvard.

Or even the University of Houston.

As plainly awful as Warren was, she couldn’t hold a candle to Bernie Sanders – who earlier in the day was booed practically off a stage in another speaking engagement when he told his supporters to vote for Hillary. He apparently learned from that and sent out a mass message to his people that he’d consider it a personal courtesy if they’d refrain from booing him when he did the same on national television.

And they largely did, even though it was clear Sanders is a sellout. In fact, Sanders wasted three minutes babbling platitudes while his supporters loudly cheered him at the beginning of the speech, in a fashion that looked a lot like he was ginning up their applause rather than taking control of the podium. Once he finally began, they shut up.

After that, it was the same old thing – empty promises aimed at low-information voters. Free stuff that will never come to pass.

It wasn’t a well-crafted speech. Essentially Sanders griped that Trump isn’t for this measure of free stuff, or that, while Hillary Clinton has echoed his empty promise of the free stuff in question and therefore she must be supported. What he did was hang his agenda around Hillary’s neck in a fashion not dissimilar to the endorsement Pat Buchanan gave to Bush 41 at the 1992 Republican Convention – restate your agenda, then foist it on the nominee while endorsing him or her.

Sanders could do that because he largely won the platform fight and recreated the Democrat Party as a European socialist outfit. Not that it was difficult to do that; Clinton is only slightly less of a leftist ideologue than Sanders, and after eight years of Obama in control of the party there isn’t much further left it can go without flying a hammer and sickle outside the arena.

Compare that to this…

The Daily Caller is at the Democratic National Convention and it doesn’t look like there are any American flags.

The stage is bland and grey, with no red, white or blue present. A thorough look at the crowd present also turns up no American flags.

If Trump’s America is one of fear and hate, what does this say about Liz Warren’s and Bernie Sanders’ America? Is it even America at all? And why don’t Democrats reject it?

Interested in more national news? We've got you covered! See More National News
Previous Article VIDEO: Watch Bernie Supporters And Delegates Chant ‘Hillary For Prison’ At The DNC
Next Article It Doesn’t Look Like Karen Carter Peterson Is All That Fired Up About Foster Campbell And Caroline Fayard