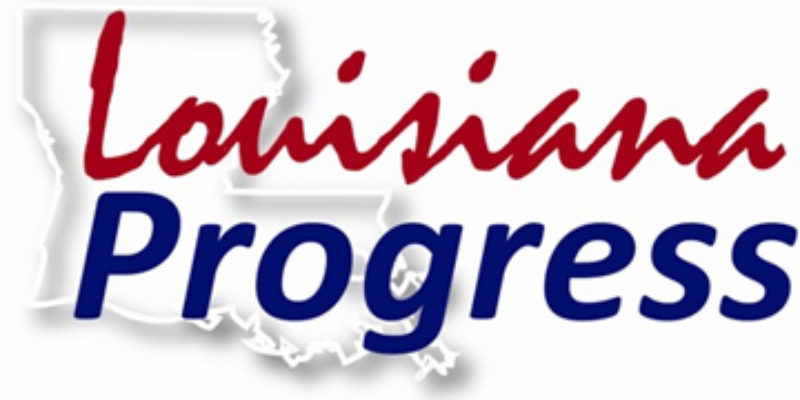 The left-wing wackos at Louisiana Progress Action certainly aren’t letting the Alton Sterling shooting go to waste. They’re scolding white Louisianians as a bunch of racists and giving “advice” on how to be a “better ally to our black neighbors” on Facebook. 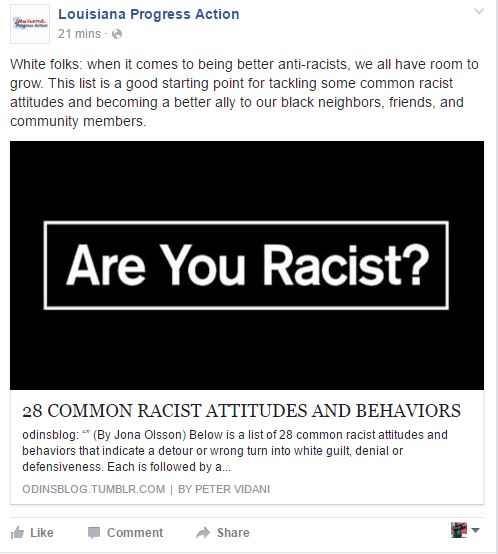 Yes, that link is to a Tumblr site. Tumblr is a breeding ground for SJW stupidity like you’re about read from that linked article. It’s something you would expect kids in high school and college to promote, not Louisiana’s largest progressive activist organization that is allegedly staffed and ran by adults.

Here are some of things that Louisiana Progress Action and the linked article consider “racist”. Let me give away the answer to that opening question, it’s “yes.” You are a racist.

“People are just people; I don’t see color; we’re all just human.” Or “I don’t think of you as Chinese.” Or “We all bleed red when we’re cut.” Or “Character, not color, is what counts with me.”

2. The Rugged Individual, the Level Playing Field and the Bootstrap Theory.

“America is the land of opportunity, built by rugged individuals, where anyone with grit can succeed if they just pull up hard enough on their bootstraps.”

A. “People of color are just as racist as white people.”
B. “Affirmative action had a role years ago, but today it’s just reverse racism; now it’s discriminating against white men.”
C. “The civil rights movement, when it began, was appropriate, valuable, needed. But it’s gone to the extreme. The playing field is now level. Now the civil rights movement is no longer working for equality but for revenge.” Or
D. “Black pride, black power is dangerous. They just want power over white people.” (Include here any reference to pride and empowerment of any people of color.)

“It’s their fault they can’t get a job, or be manager.” Or “We have advertised everywhere, there just aren’t any qualified people of color for this job.” Or “If he only worked harder, applied himself more, or had a stronger work ethic.” Or “If she just felt better about herself – internalized racism is the real problem here.” OR “She uses racism as an excuse, to divert us from her incompetence.” Or “If he didn’t go looking for racism everywhere…” (As if racism is so hidden or difficult to uncover that people of color would have to search for it.)

There are 24 more things that are considered “racist.” They all boil down to if you disagree with this writer, you’re a racist. Louisiana Progress Action must agree with that reasoning.

I suppose if you’re reading this article, you’re a racist too. Forget about what’s actually in your heart.

Louisiana has some real racial issues that need to be addressed. The only way we’re going to resolve them is through dialogue by well-intentioned people on all sides.

By literally using Tumblr SJW “logic” to club whites, Louisiana Progress Action has shown they’re not really interested in reducing racism (it probably can never be truly ended). Instead, they just want to exploit the issue for political gain.