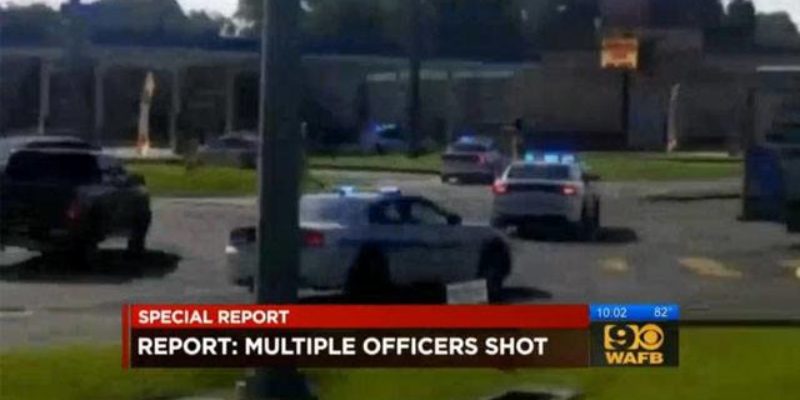 UPDATE – 9:44 p.m. – The Guardian has an article out about Gavin Long’s online activities. This guy had an online alias, Cosmo Setepenra, and through it he expressed support for black nationalist causes. He also showed signs of paranoia, claiming he was under intense surveillance “gang stalking” by corporate and government agents looking into every aspect of his life.

He also praised last week’s attacks on police in Dallas in a video.

UPDATE – 9:30 p.m. – The two men held in West Baton Rouge Parish that were being held as persons of interest in today’s attack have been cleared and released.

UPDATE – 8:33 p.m. – Breitbart has published a series of tweets from Black Lives Matter supporters celebrating the police shootings. Does this reflect the opinions of most Black Lives Matter supporters, no. But that group/movement has a problem. Some of them have used anti-police rhetoric and chants and even talked about killing cops at BLM events. Now cops are turning up dead and now BLM has to address this.

Meanwhile, no statement as of yet from Hillary Clinton.

UPDATE – 6:47 p.m. – We have another post up, see it here, about Gavin Long and who he may have been. If the social media ID the blogosphere has been making on him is correct, he was almost exactly who you would have expected him to be, only more of a motormouth. He was a black nationalist fanatic with a YouTube Channel and a Twitter page, and he never shut up right up to the point where he let his rifle do the talking. And went out and killed a black cop, among others.

Meanwhile, we have the ID of the third victim: Brad Garafola of the East Baton Rouge Sheriff’s Office. 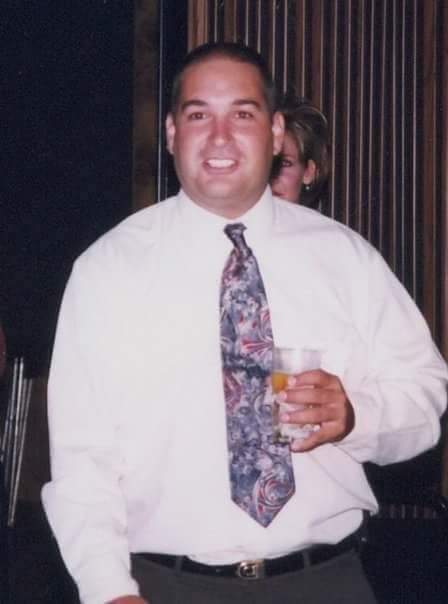 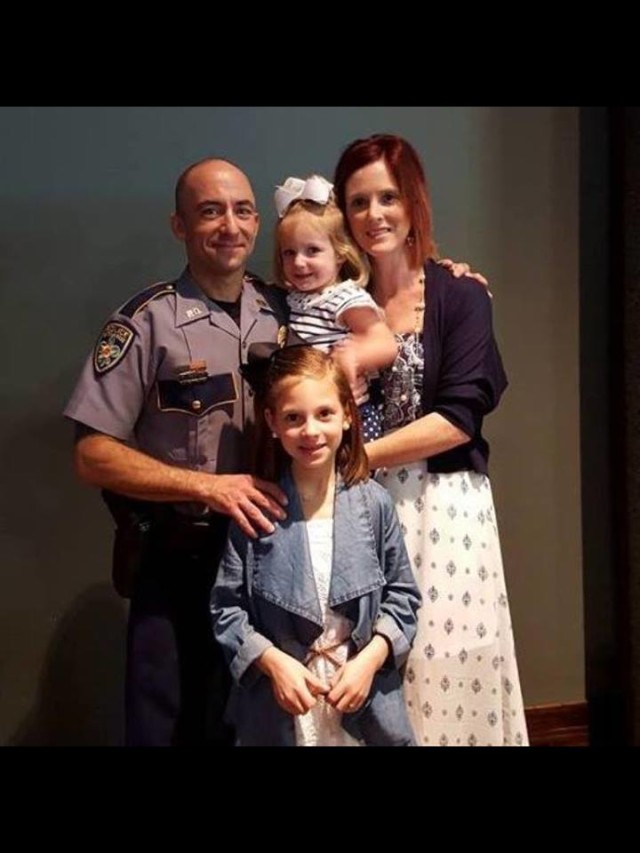 UPDATE – 4:48 p.m. – We’re not looking for a silver lining from this atrocity. There isn’t one. But if Shepard Smith were to lose his job over this, that would be some solace.

Plus this, which pegs the “Whoa!” meter… 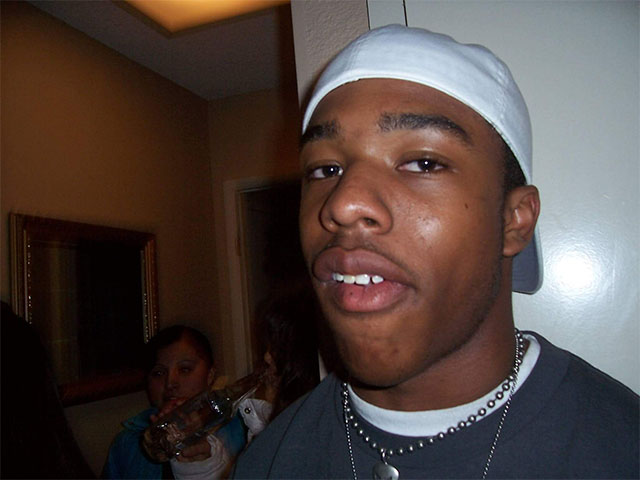 We’re scraping together what little is available about him. What appears to be true is – our readers are not going to believe this – he made the Dean’s List at the University of Alabama in the spring of 2012.

The Wall Street Journal reports Long was with an “anti-government” outfit called the New Freedom Group. It’s hard to find out much about that organization. 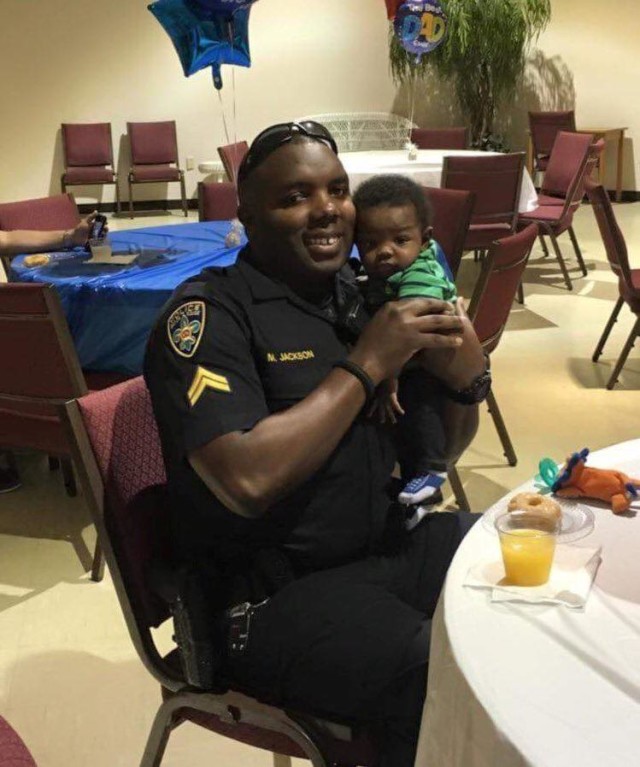 UPDATE – 3:58 p.m. – Our sources aren’t telling us anything along these lines as yet, but NBC News is pushing a connection between the shooter and the sovereign citizens movement…

Were this to be true, and we don’t know that it is, it would be the second time in four years that people associated with that movement have killed police officers in Baton Rouge. In 2012, two St. John Parish sheriff’s deputies were killed by sovereign citizens fanatics.

UPDATE – 3:43 p.m. – WAFB, citing other news sources, just identified the dead shooter as Gavin Long of Kansas City. He was 29.

UPDATE – 3:40 p.m. – A statement from Donald Trump which is a little less than helpful (he’s politicizing the shooting, and we wish he wouldn’t) though the elements of it aren’t incorrect…

UPDATE – 3:33 p.m. – There is now a GoFundMe for Montrell Jackson’s family. Click here to help.

UPDATE – 3:20 p.m. – Gov. John Bel Edwards called for “constructive dialogue” rather than violence for Baton Rouge to heal and said he wasn’t going to tolerate any more “hate.” 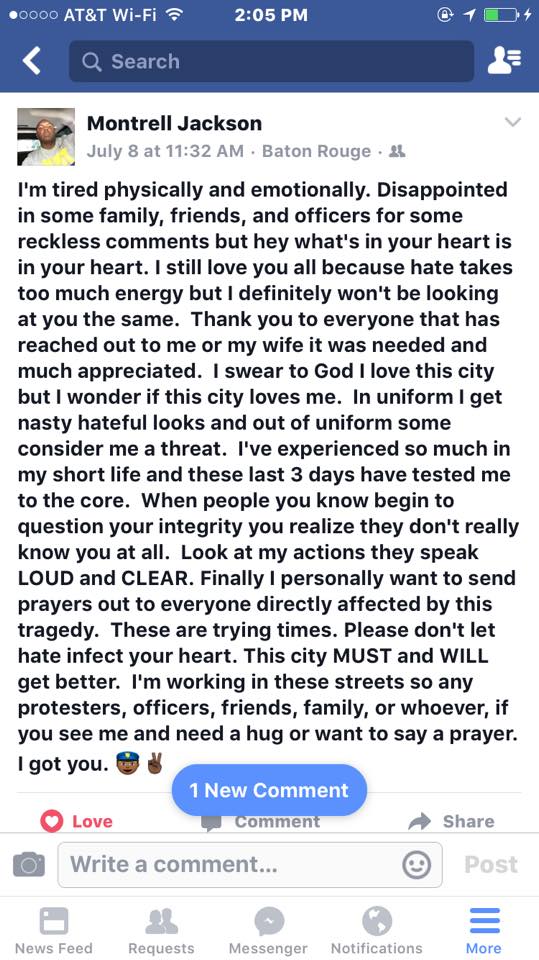 UPDATE – 3:13 p.m. – Baton Rouge police chief Carl Dabadie, obviously shaken, called the shootings “senseless” and asked for prayers for all law enforcement. Dabadie said other agencies are coming in to back up the BRPD because his office has been “depleted” over the past 12 days amid the protests in the wake of the Alton Sterling shooting.

UPDATE – 3:10 p.m. – East Baton Rouge Parish sheriff Sid Gautreaux didn’t identify those shot, but he did say that at least of his three deputies who were victims, all were married and all had children.

“This is not so much about gun control as it is about what is in men’s hearts,” he said, and warned that if we don’t come together and “end this madness, we will perish as a people.”

UPDATE – 3:05 p.m. – At the press conference, state police commander Mike Edmonson just said that the police believe the dead shooter was the one who shot all the cops and that this is no longer an active shooter situation.

Edmonson did not confirm a fourth death among the police; he said the officer in question was in critical condition and had just come out of surgery. Hopefully he’s correct and the officer will pull through; our sources, close to the officer’s family, have different information.

Edmonson’s statement would indicate the police believe the two men arrested in West Baton Rouge Parish would be the others involved.

A family friend of Montrell Jackson said he was one of the officers killed in #BatonRouge. He and his wife just had a baby in March.

I condemn, in the strongest sense of the word, the attack on law enforcement in Baton Rouge. For the second time in two weeks, police officers who put their lives on the line for ours every day were doing their job when they were killed in a cowardly and reprehensible assault. These are attacks on public servants, on the rule of law, and on civilized society, and they have to stop.

I’ve offered my full support, and the full support of the federal government, to Governor Edwards, Mayor Holden, the Sheriff’s Office, and the Baton Rouge Police Department. And make no mistake – justice will be done.

We may not yet know the motives for this attack, but I want to be clear: there is no justification for violence against law enforcement. None. These attacks are the work of cowards who speak for no one. They right no wrongs. They advance no causes. The officers in Baton Rouge; the officers in Dallas – they were our fellow Americans, part of our community, part of our country, with people who loved and needed them, and who need us now – all of us – to be at our best.

Today, on the Lord’s day, all of us stand united in prayer with the people of Baton Rouge, with the police officers who’ve been wounded, and with the grieving families of the fallen. May God bless them all.

The guess is if you took a poll in Baton Rouge you probably would find a majority opposed to him saying much more on the subject, for various reasons.

UPDATE – 1:35 p.m. – On top of everything else, WAFB-TV just showed video of some shirtless lunatic (of caucasian persuasion, this time) who wandered up the median on Airline Highway toward the police blocking the road at I-12 gesticulating in a threatening manner, and the cops promptly tased him and stuffed him in a police cruiser.

We’re told the FBI has descended on the case, as indications are that the suspects are from out-of-state.

Meanwhile, we’re now told one EBRSO deputy is being treated at Baton Rouge General Hospital. So that would be six officers hospitalized, three of them dead.

RT @tjonesreporter: Source says the two males stopped by police in West Baton Rouge have been turned over to @LAStatePolice

UPDATE – 12:50 p.m. – From eyewitnesses to the scene talking to the media and sources close to BRPD, there was one “front man” who presented himself at the B-Quik with a long gun as a shooter, and when the police were called to the scene two others opened up.

And if that’s how this played out, there is no question but that this was a premeditated attack.

UPDATE – 12:45 p.m. – A source tells us that two of the dead are BRPD officers, and the other is an East Baton Rouge sheriff’s deputy. At least one of the lost BRPD officers is black.

UPDATE – 12:38 p.m. – It’s a somewhat confusing scene, but the police have cordoned off Airline Highway from Goodwood to the north to I-12 to the south.

There is an active SWAT situation on the scene. To get a read on the geography of the scene, here’s a map… 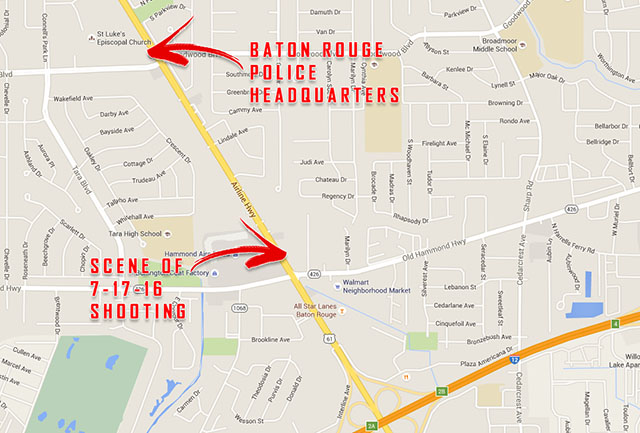 Eyewitnesses seem to indicate that the activity may have taken place in the lot behind the gas station.

To recap what we know – there were three shooters, one of whom is now dead – he’s a black male with a Missouri driver’s license. Either six or eight policemen were shot in the gun battle (it’s unclear) which took place shortly after 9:00 this morning, with five having been taken to Our Lady of the Lake Hospital. Three died on the scene, one is in critical condition and one is described in fair condition.

All three shooters were described as wearing black military-style clothing.

There is an active SWAT situation at the scene. The dead shooter is being examined by a bomb robot.

And a pair of men have been detained at the Wal-Mart in Port Allen, after having walked in wearing black military-style clothing, bought clothes and changed in the store. They were driving a car with Texas plates. No word whether these might have been the other two shooters or if it’s someone else, or if it’s even related or just suspicious.

At least seven officers were injured and three are feared dead, CNN reported.

“The count is three officers dead possibly,” Mayor-President Kip Holden told CNN, saying that it is still an active scene.

Both lanes of Airline Highway are shut down from Goodwood Boulevard to Old Hammond Highway and from Old Hammond to Drusilla Drive, Hicks said.

About 20 police officers wearing bulletproof vests are near the scene and a helicopter is flying overhead.

Hammond Aire Plaza in Baton Rouge is currently an active scene following a Sunday morning shooting that may have killed three Baton Rouge police officers and left others injured. The Advocate is reporting that East Baton Rouge sheriff’s deputies may have also been shot. The hunt for the shooter is currently underway.

This follows a very dramatic week of protests and increased rhetoric against cops in Baton Rouge and nationwide, after police shot and killed Alton Sterling in a controversial shooting. This morning’s shooting is only a few miles away from where Sterling was killed.

John Bel Edwards has released a statement on the shooting.

#lagov on the shooting of law enforcement officers in Baton Rouge today: pic.twitter.com/BU3B4Iznbe

And CBS News has video of from the shooting.

Interested in more news from Louisiana? We've got you covered! See More Louisiana News
Previous Article Waguespack: The Quest For Common Ground
Next Article CHILLING VIDEO: Was This The Gavin Long Who Massacred Policemen In Baton Rouge Today?