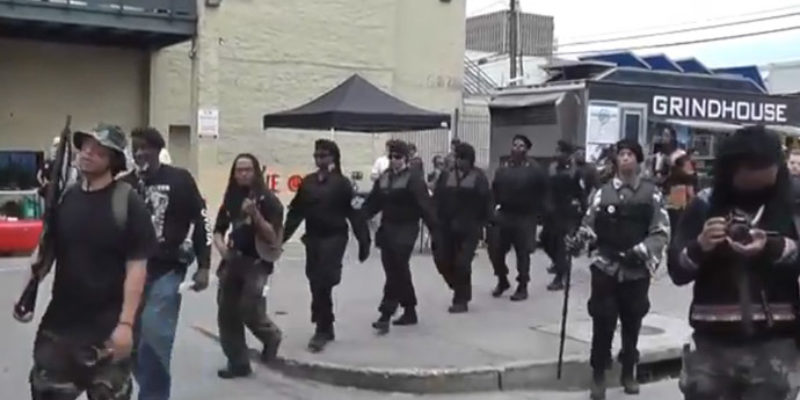 The tourists have come to Baton Rouge and they’re looking to have a fire sale.

Until this weekend, the protests over the Alton Sterling shooting have been largely peaceful. There have been a few isolated incidents of violence but the local community leaders have – to their credit – worked to keep it that way.

That started to change last night. There were mass arrests as protesters tried to shut down I-12 running through Baton Rouge. There has never been an attempt to shut down a highway until last night in Louisiana. There were also clashes with police.

What’s changed? This weekend, out of state activists and radicals have begun to enter the fray. Here’s a press release the Baton Rouge police have sent out about the mass arrests from last night.

The protest last night at Baton Rouge Police Headquarters organized by individuals from outside our Baton Rouge community resulted in 102 arrests.  In addition to the arrests, 3 rifles, 3 shotguns and 2 pistols were confiscated.  A Baton Rouge Police Officer had several of his teeth knocked out as a projectile was thrown from the protest.

It appears the protest at Baton Rouge Police Headquarters have become more violent as out of town protesters are arriving.  Any protest which becomes violent will be immediately dispersed.

We appreciate the support and actions of our local community.

The New Black Panther Party rolled into town Saturday. They held a protest at the Baton Rouge Police Headquarters, which they called the “Baton Rouge Pig Department.” Sources told The Hayride on Friday that large numbers of vehicles with out of state tags were seen heading westbound into Baton Rouge.

Also arriving in Baton Rouge on Monday is the African American Defense League. The New Black Panther Party offshoot, which helped inspire the Dallas police shooter, is coming to issue a bounty for the two white officers that shot Alton Sterling. They’ve also talked about “holding a barbeque” and “sprinkling pigs’ blood” in reference to killing white cops.

Already in town is the Revolutionary Communist Party. They’re the group who helped instigate the Ferguson riots two years ago after the Mike Brown shooting. From a 2014 article from IJ Review.

However, the focus is starting to fall on one Chicago-based activist, Greg “Joey” Johnson, and one organization in particular, the Revolutionary Communist Party.

A blog called “The Missouri Torch” has been exposing the role of Johnson and other out-of-town communist agitators in promoting violence.

Here’s a video of Johnson urging the crowd to defy the recent curfew:

As for the Revolutionary Communist Party itself, it released a statement yesterday calling for – you guessed it – rebellion, through its official publication, Revolution Newspaper.

What these guys are looking for is a race war. They hope that the race war can bring about the communist revolution that would enable them to take over America.

When these guys show up, violence usually comes with them. They’re the ones who have whipped up some protesters into demanding the resignation of Baton Rouge Mayor Kip Holden by Tuesday. If Holden is still mayor, they’re threatening violence.

If things continue to get violent, we now know why.

Interested in more news from Louisiana? We've got you covered! See More Louisiana News
Previous Article There Were Over 100 Arrests Of Protesters In Baton Rouge Last Night, And Here’s One Reason Why
Next Article The Low Popahirum, July 11, 2016