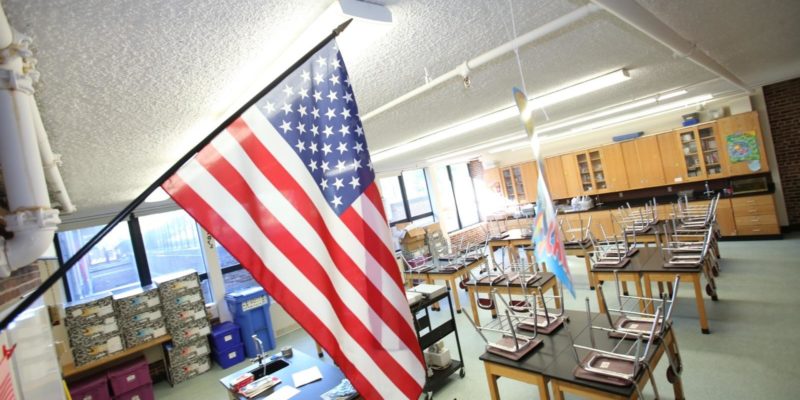 Due to an outcry by parents, the Lafayette Parish Public Schools has declined to change its policy on the Pledge of Allegiance and the national anthem. We reported on Tuesday that the school board was considering dropping the requirement that the school day begins with the Pledge.

We’ll let you taste the sweet tears of the American Humanist Association, who had been one of the groups pushing the changes.

The American Humanist Association’s Appignani Humanist Legal Center criticizes the Lafayette Parish School System in Lafayette, La., for failing to update its Pledge of Allegiance policy to comply with students’ rights under the First Amendment.

Last night, the Lafayette Parish School Board voted against altering the district’s policy requiring students to stand for the Pledge of Allegiance, even if they object to participating in the exercise. The board also upheld the policy’s regulation that school district assemblies and meetings must begin with the Pledge and the National Anthem.

The school district’s policy concerning the Pledge of Allegiance first came under scrutiny when the American Humanist Association’s Appignani Humanist Legal Center sent a warning to the district on behalf of an Acadiana High School student was badgered and verbally abused by a teacher for exercising his right to remain seated during the Pledge.

“Students have a First Amendment right to refrain from participating in the Pledge of Allegiance exercise,” said David Niose, legal director of the American Humanist Association, in reference to the 1943 ruling in West Virginia State Board of Education v. Barnette. “The school district had the opportunity to reflect this settled law in its policy but instead chose to continue unjustly requiring students who object to the words ‘under God’ to stand for the Pledge.”

The American Humanist Association is promoting a national boycott of the Pledge of Allegiance to encourage students who object to the “under God” wording of the Pledge to exercise their right to remain seated during its recitation. The American Humanist Association has advocated for the removal of “under God” from the Pledge because the phrase, added in 1954 during the McCarthy Era, conflates patriotism and belief in a god, encouraging prejudice against atheists and humanists.

More information about the American Humanist Association’s Pledge boycott can be found here.

This press release can be viewed online here.

This is a reminder that together we can defeat Cultural Marxism if we put pressure on our officials.

Interested in more news from Louisiana? We've got you covered! See More Louisiana News
Previous Article MONSTERS: 5 Arrested In Amite, Louisiana After Autistic Woman Found Living In Backyard Cage
Next Article On The Carnage In Dallas, And Across The Country