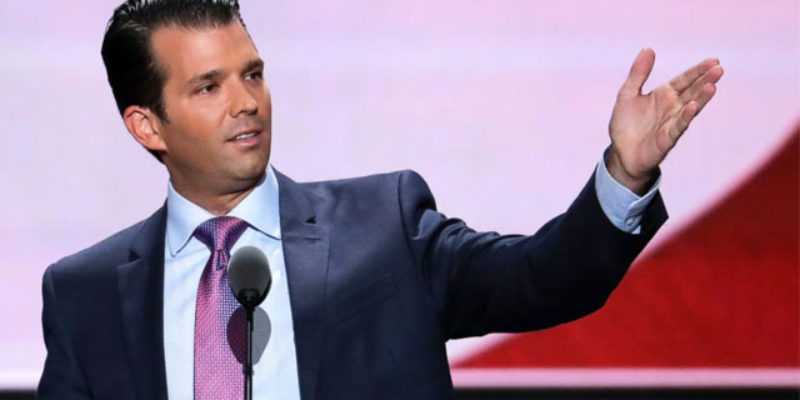 And if you missed it, here it is…

The highlights: Trump Junior emphasized that his father put the kids to work in the family business at young ages, and in doing so none of them turned out to be the typical billionaire brats so many others have – and he actually took a shot at billionaire brats in the speech, which was entertaining.

He also emphasized that regular guys without Ivy League degrees were able to move up in Trump’s organization, which is something that probably should have been given more emphasis during the campaign. One thing in the speech that came through which might actually serve as a strength of the Trumps as opposed to the Romneys four years ago is that the Trumps don’t come off as ashamed of their wealth the way the Romneys did; they celebrate it and consider it a measure of success and a source of validation. The blue-blood Romneys were no more “old money” than the Trumps are, but they carry themselves that way. Fifty years ago that might have played better, but it doesn’t in modern America.

When you’re confident that your wealth, and the attainment of it, produces good for people who come in contact with it you can have that attitude. Romney was a venture capitalist and private equity guy; he financed economic growth that helped lots of Americans. But he didn’t develop that common touch by actually working with “regular folks” the way Trump, whose business involves construction and hospitality among other things, would have. That rubs off on the kids to a large extent.

It’s not that the Romneys aren’t good people. They’re probably better people than the Trumps. But to the public they never came off as accessible the way Donald Junior does in this speech.

There have been some good speeches in the first two days, and some not-so-good ones. This might have been the best of the lot so far. If Donald Senior is able to match it, he might come out of this convention having helped himself even amid the fights over the platform and the rules and the strange absence of Ohio Governor John Kasich from the stage to at least greet the delegates.

A downside? Well, the media is going to pick up on this bit the Daily Show put out on Twitter…

Quoting a friendly piece in The American Conservative is a bit different animal than cribbing from Michelle Obama.

Especially when the author of the piece says this…

Except it wasn't stealing…

And then this happens…

“I was one of the principal speechwriters. It’s no problem.” @fbuckley to our @meridithmcgraw over line in Don Jr speech.

Oh, well. Maybe they can stick to Melania’s mistake.

Interested in more national news? We've got you covered! See More National News
Previous Article The Same Establishment Losers Who Gave Us Trump Are Already Looking To Their Own Futures
Next Article CNN Says Gavin Long Had PTSD