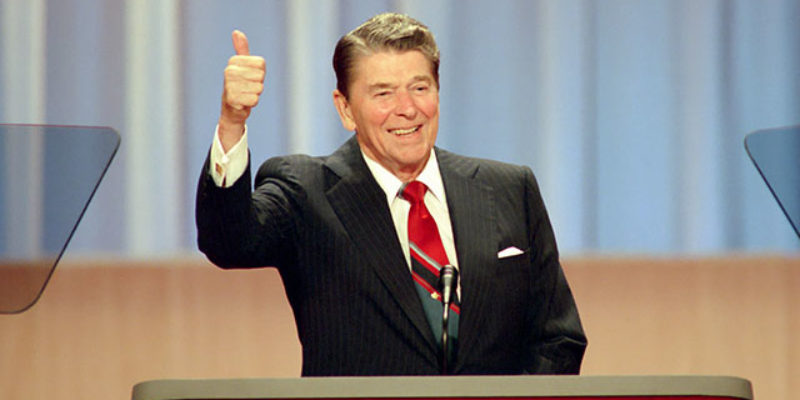 In August of 1988, then-president Ronald Reagan took the stage at the Superdome in New Orleans to deliver his last address to a Republican National Convention as the nation’s chief executive. What followed was a 46-minute tour through the history of his time in office and its accomplishments, and an admonishment to the gathered delegates and those watching on TV to continue the fight to keep the nation free.

Reagan was a master at turning a phrase, and with inspiring words he exhorted the country to embrace generosity, tolerance, piety, liberty, common sense and hope, among other things. He spoke volumes about the importance of restrained government and individual self-determination, and he suffused his speech with boundless optimism and positivity.

It’s worth seeing the speech again, and revisiting the happy time when America’s last truly conservative president was leading a country at the zenith of its stature in the world.

This is not to continue the cult of Reagan. We all know that 28 years after this speech America is not what it was during his time, and we know the Republican Party has to find a way to move beyond its grounding of all political things in a “what would Reagan do?” form. The party’s message – the party’s, not its current nominee, who is busy driving both the policy adherence and the optimistic spirit of Reagan right out of the GOP – must carry his inspiration but find new expression tailored to a 21st century American people and challenges.

But the principles of which he spoke are timeless. So are the virtues he put on display.

At a time when America appears faced with a choice between a nationalist party and a socialist party, here’s a 46-minute respite for those who wish to have it.

Interested in more national news? We've got you covered! See More National News
Previous Article Why Ted Cruz’s Stand Against Trump Is So Important
Next Article One Of The U.S. Senate Candidates Sticks Up For Donald Trump, Attacks Ted Cruz