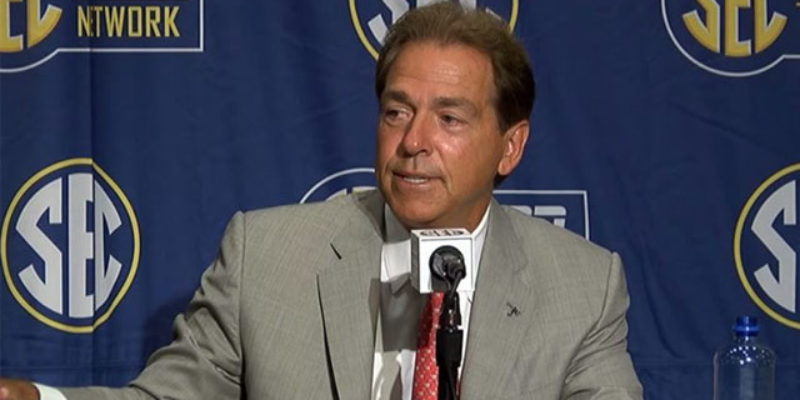 The SEC Media Days are going on in Birmingham this week, as the conference annually takes this time of year to do what it can to alleviate the long, boring period between the end of the College World Series and the start of college football.

And yesterday, Alabama Football had its time in the sun. Observers were treated to long periods of listening to Nick Saban opine about items on and off the football field.

Saban, the most successful college football coach in the modern history of the game, took that time to remind lots of people what they already knew about him – he’s an asshole of such selfish mindset and narcissistic instinct as to personally repel anyone not interested in what he can do for them.

Why do I say this? First, let’s roll the tape of his appearance on the SEC Network when he was asked about the incident earlier this spring, in which his star left offensive tackle Cameron Robinson and reserve safety Hootie Jones, both of whom hail from Monroe, Louisiana, were arrested in a park in that city with a stolen gun and in possession of marijuana…

Did Paul @Finebaum strike a nerve with Nick Saban on the Cam Robinson situation? Watch:https://t.co/BySCqTJbB2

So what you just heard was Saban complaining that the two people in the back seat of the car who were not football players at Alabama were not arrested – maybe because the cops found neither weed nor guns on them; there was a stolen gun under Robinson’s seat and both he and Jones had marijuana on them – and insinuating that his players were, in Paul Finebaum’s words, being persecuted.

One wouldn’t normally assume that they had their Bama jerseys on at the time of their arrest to make it so easy for the police to identify them as Saban’s players. Perhaps that assumption is wrong.

Then after the segment, when the SEC Network broadcast cut to a commercial, Saban exploded at Finebaum off-air and said, if you can make this out from the video (we couldn’t, but it’s been widely reported), that the cops were disgruntled LSU fans carrying water for LSU by arresting his players…

That occasioned the public information officer for the Monroe Police Department, Chris Bates, to publicly rebuke Saban for being completely off-base…

“I can tell you for a fact that the first officer on the scene is not an LSU fan,” Chris Bates, the Monroe Police PIO, said Wednesday. “He hates LSU. He doesn’t like the color yellow or purple and gold. In fact, he’s a Florida fan. If you mention LSU around him, he throws up in his mouth. Most of our officers are LSU fans, but we have some who are Arkansas fans and Georgia fans and Alabama fans. And I’ll tell you this, the first officer did not even know those guys were players.”

Saban then addressed the media gathering, and was asked whether the two players would be suspended for the first game of the season (Alabama has a tough contest with USC in its opener)…

In other words, he’s not going to risk losing a game because his left tackle spends the offseason with weed and stolen guns. He’s couching this in trying to “help” them, but that’s just a cover. Anybody could see it.

The tell was when he attacked the Monroe police for the sin of arresting his players in the first place.

For Saban, it was the wrong thing to do and, given the national events of the last week, the wrong time to do it.

Forget the thin skin Saban displayed on camera and the four-letter words he employed when the network went to commercial in just the latest demonstration that the most powerful and well-compensated coach in college football doesn’t like to be questioned or criticized.

He may say he doesn’t care what people think, but people who know him well will tell you otherwise.

We already knew Saban could be loud-mouthed and foul-mouthed, but he went beyond angry in defending his decision to let Cam Robinson and Hootie Jones play in the opener against USC.

After the SEC Network went to commercial, Saban aimed an even angrier tirade at Finebaum. On his radio show later, Finebaum said based on their conversations, Saban “believes the police were carrying water for LSU.”

If you’re going to make that charge as a head coach, make it loud and clear and direct, in public with the cameras rolling, perhaps in a ballroom at a hotel during a media event with a captive audience of hundreds of reporters, if you have that opportunity.

Otherwise, it’s incredibly irresponsible of a public figure who owns the bulliest pulpit in his profession to make a serious accusation against police officers by insinuation.

All police officers aren’t always right, but they have a job that demands far more and pays far less than that of SEC football coach. Even if Saban’s right in his suspicion, suggesting that the officers who arrested Robinson and Jones didn’t do their jobs properly wasn’t just wrong. It was completely unnecessary.

And just a little more…

If Saban wanted to defend his decision to not suspend the players for USC, as he clearly wanted to do, perhaps he could’ve explained why they were sitting in a car in a public park after 2 o’clock in the morning with even a tiny amount of marijuana and at least one gun they were aware of.

The players got the legal outcome they wanted and perhaps deserved. They continue to perform the disciplinary tasks Saban laid out for them, which speaks to the poor choices they made and his genuine attempt to help them avoid similar mistakes in the future. They’ll get the football outcome the coach mandated and we all expected.

From the standpoint of an LSU fan accustomed to Saban’s frequent outbreaks of jackassery, perhaps it’s time to spread the rumor that Alabama boosters paid off Ouachita Parish district attorney Jerry Jones to drop the charges against Robinson and Jones. There is no less evidence for that than there is for Saban’s contention that it was vindictive LSU fan cops who made the arrest.

Either way, what he’s done ought to thoroughly alienate the people of Monroe, and make it exceedingly difficult for Alabama to continue recruiting that area in the future.

But then again, who knows? Some people really like playing for a jerk. Especially when said jerk will defend them from the law if it helps him win football games.

Interested in more national news? We've got you covered! See More National News
Previous Article The Low Popahirum, July 14, 2016
Next Article BAYHAM: Who Will Be The Donald’s Apprentice?