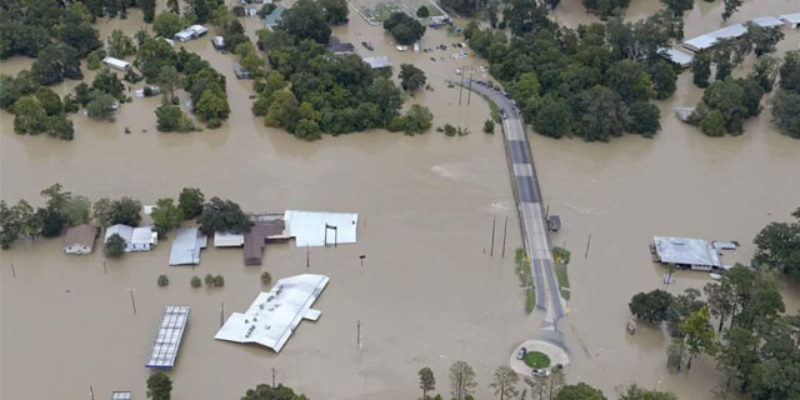 The heavy rains which inundated the Baton Rouge area from Friday to Sunday and put so much of the area under water have largely abated, though the forecast does call for some intermittent showers for the rest of the week.

But flooding is very much still a major concern – in fact, it might even be a growing concern in some parts of the area.

Particularly the southern portion of East Baton Rouge Parish and into Ascension Parish.

The photo above is of Port Vincent, and particularly the bridge over the Amite. Here’s what that’s supposed to look like…

The Amite is, as of this writing, some 11 feet above flood stage. It will be Wednesday night before the Amite is supposed to recede below flood stage.

Most folks think of Baton Rouge, and the fact it’s along the Mississippi, and expect that water drains into the Mississippi. But that’s not actually the case at all. In fact, it’s the Amite and not the Mississippi which drains the water from the area. The Mississippi has levees along its banks.

So all of the bayous and creeks running through East Baton Rouge Parish which flow into the Amite – whether it’s the Comite River, Jones Creek, Clay Cut Bayou, Bayou Manchac – are backing up. Bayou Manchac, which begins almost at River Road and flows to the Amite to form the southern boundary of East Baton Rouge Parish, itself has several bayous and creeks flowing into it and those are all backing up.

Including Bayou Fountain, which is the small body of water which flows from the LSU campus all the way to Bayou Manchac just to the west of Highland Road. Right now Bayou Fountain looks like the Rio Grande, and there is concern about floodwaters swamping the apartments along Burbank Drive.

Something similar is happening at Bayou Paul in St. Gabriel, to the south. It also flows into Bayou Manchac, which flows into the Amite.

To the north, the Amite basin bottleneck has already become a major problem. The Comite, and the creeks and bayous draining into it, has been the site of the worst flooding in Baton Rouge – six to eight feet of water and flooding all the way to the eaves of roofs. And across the Amite in Livingston Parish, total devastation. Some 90 percent of the homes in Denham Springs are flooded.

And all that water is now making its way downriver into Ascension Parish.

This will be a problem for the rest of the week in Baton Rouge and it will mean millions, if not billions, of dollars in property damage.