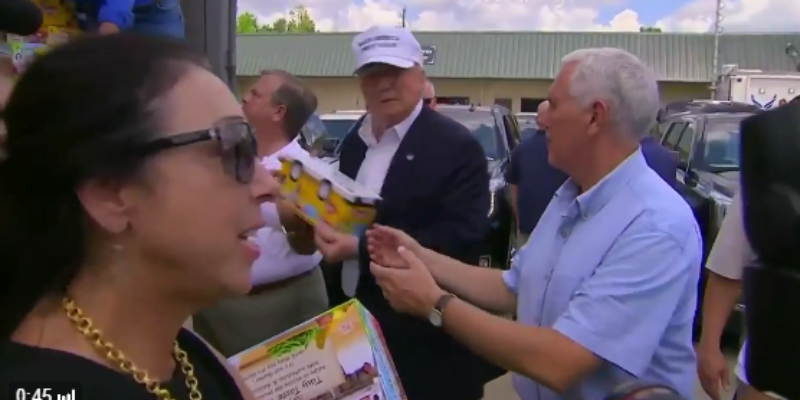 Gov. John Bel Edwards was forced to eat his own words when GOP nominee Donald Trump showed up in Baton Rouge today to donate and hand-out supplies for Louisiana flooding victims.

Edwards’ spokesperson was silent on President Obama and Hillary Clinton’s failure to visit the state in the wake of the flooding crisis.

But, the spokesperson took a swipe at Trump, saying he didn’t want him to show up with cameras and not actually help victims.

“Donald Trump hasn’t called the governor to inform him of his visit,” Edwards’ spokesman said. “We welcome him to LA but not for a photo-op. Instead we hope he’ll consider volunteering or making a sizable donation to the LA Flood Relief Fund to help the victims of the storm.”

However, Trump didn’t show up with the media and he came with a truck full of goods for victims.

Interested in more news from Louisiana? We've got you covered! See More Louisiana News
Previous Article In A Rare Moment, Mary Landrieu Thanks Trump For Louisiana Visit, Throws Shade At Hillary & Obama
Next Article In A Big Win For Donald Trump, President Obama Announces His Own Louisiana Visit