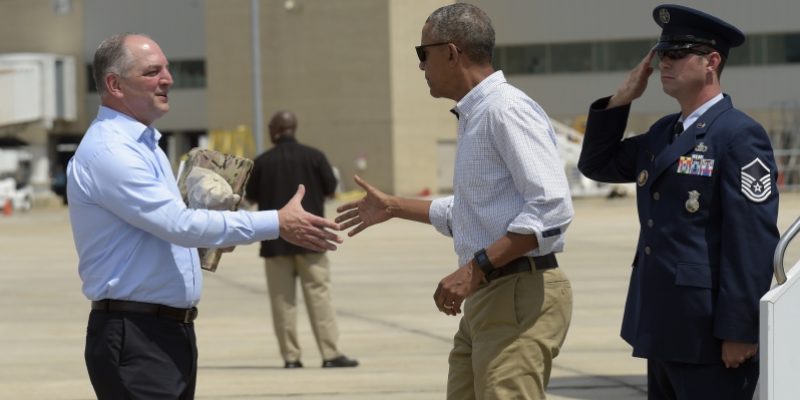 Governor John Bel Edwards (D) was called out by a radio caller who noted the Amite Democrat’s hypocrisy over his critique of Donald Trump’s visit to the state, versus his praise for President Obama’s last-minute visit.

On the Louisiana Radio Network’s ‘Ask The Governor,’ Edwards was asked by a radio caller this question:

“Referring back to the Honor Code and how you ran on that,” the caller said. “I noticed that when Trump made his announcement that he was coming to Louisiana, you asked him instead to make a size-able donation or to volunteer and I’m just interested to know if you issued that same challenge to President Obama or Hillary Clinton?”

That’s when Edwards said he actually never had a problem with Trump coming to the state to visit flood victims, but that he didn’t want him to turn it into a political photo-op.

“First of all, I’m well familiar with the Honor Code, but I appreciate you going through that again,” Edwards said in response. “The fact of the matter is I didn’t ask Mr. Trump to instead of coming to Louisiana to make a contribution. I said he was welcome to come to Louisiana. That I hoped he would be helpful and not simply use the trip as a political photo-op, which by the way, he did not.”

Edwards noted that Trump’s running mate Indiana Gov. Mike Pence called him the following day and said they had a “very nice conversation,” saying Pence wanted to make sure that their trip to the state was to be helpful.

Then Edwards praised Obama’s trip to the state, which he was berated for since he had refused to cut his vacation short to see flood victims earlier.

“Obviously when the President came yesterday, his presence here was also helpful and it gave me an opportunity to make significant requests to him in terms of our ongoing recovery efforts,” said Edwards. “But also to show a united front with the members of the congressional delegation that were there. I think you’re a little off base with the question, but I can assure you that the president’s presence here yesterday was helpful.”

What Edwards never mentions is that Obama did actually turn his trip into a photo-op, the exact thing he told Trump not to do.

Obama held what seemed to be a press conference with a staged crew of congressional members behind him. If Trump had done the same, Edwards would have decried his visit as a generic photo-op made to help him politically.

Edwards seems to have no problem when Obama does it though.

Interested in more news from Louisiana? We've got you covered! See More Louisiana News
Previous Article I Was On The Radio In Mobile To Talk About The Flood, The Cajun Navy, The Volunteers And Senator Perry Today…
Next Article Charles Boustany Gets Jim Donelon’s Endorsement, Uses It To Beat Up On John Kennedy