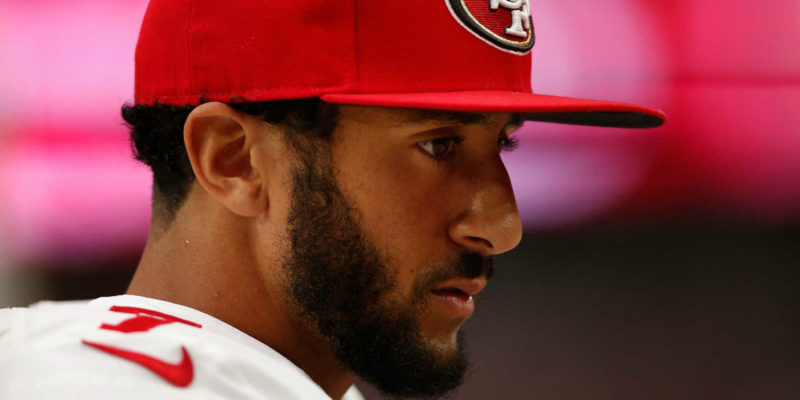 For a second, imagine what would have occurred if NFL player Colin Kaepernick had not stood up to support the gay pride, rainbow flag. The American flag, to liberals, isn’t sacred. But that rainbow flag, it practically has a Manson family cult following.

Chances are, if you’re imagining what would happen had Kaepernick protested the rainbow flag, you immediately get a lightning-speed flash to an MSNBC panel of leftist gays and lesbians telling the rest of us how hard it is to live in a country that gives them the freedom to vote, be married, have children, live as they wish, buy what they want and protects them from Islamic jihadist.

Oh wait, no. None of that matters because…. OPPRESSION!

When Kaepernick refused to stand for the country’s National Anthem and the American flag and then later said he was protesting the country because it was ‘oppressive’ and ‘unjust’ to black Americans, the standard reaction from every sports fan was fury, outrage and distaste.

Nonetheless, our elitist DC-NYC-L.A. mainstream media who forgets that the majority of people live in middle America, immediately began their apologist headlines about how it’s totally normal for Americans to hate their country.

Like this NBC News story which tells us that Kaepernick’s hatefulness towards America is “part of a long sports tradition.”

What would have happened, though, if that same sports player refused to stand for the gay rainbow flag?

Kaepernick would have to resign from the NFL and he’d have to go off to some fake celebrity rehab facility where they teach you how to be nice and gentle and soft and compassionate.

Not to mention, the gay lobby would be in utter hysteria for months, probably years. A new gay non-profit would be started and named something like ‘The Post-Kaepernick Project.’

Rachel Maddow would be doing nightly analysis on the case for months, telling us all that this derives from a “systemic” problem against gays and lesbians that is rooted in white, Anglo-Saxon tradition.

CNN’s resident hideous lesbian Sally Kohn would be on every program telling us that this is all because of white men and their hate for homosexuals. Anderson Cooper would have a special on the case with a focus group of gays and lesbians who would proceed to tell us how they were triggered by Kaepernick.

Twitter would ban him. Congress would pass a resolution to disavow his action. And Hillary Clinton would hold a campaign rally flanked by gay men in rainbow ‘I’m With Her’ t-shirts.

Notice how we’re allowed to speak out against issues approved by the political establishment and media elite.

The elites tell us who and what we’re allowed to talk about.

Criticize America? Get a full-fledged piece in the Washington Post about how you’re a hero.

Criticize anything the elites worship? You’re banished to hell like you’re Paula Dean saying the n-word.

That’s the system that we have, or rather, had. Except now, we have Donald Trump, who for the sanctimonious, intellectual conservative CPAC crowd is a drain on the GOP.

So essentially he’s hated by all the people who hate and have a disdain for working and middle class Americans. Perfect!

And with Trump, we’re actually allowed to talk about issues that the conservative intellectual crowd told us weren’t important.

The Bush-era of intervention and nation-building in every Middle Eastern country was never anything conservatives were allowed to question. We were told that in order to be “real Republicans” we had to be 100 percent on-board with the Iraq War and we had to “spread democracy” to terrorist-influenced countries who have done nothing for us.

The massive influx of illegal and legal immigration, we were told, is a good thing that “strengthens our diversity.” We were never allowed to question Marco Rubio’s ‘Gang of Eight’ legislation because freedom somehow translates to taking in every human being on the planet into your country. While the political elites never have to worry about immigrants taking their jobs, they preached to the working class that they had to be more accepting of mass immigration.

The endless international trade agreements that the globalist, Bush-era neoconservatives salivate over was pushed onto all conservatives and Republicans as a sign that free trade is the best solution. That somehow, free trade translates to allowing other countries to strip your country of its industry and the jobs that go with it. Paul Ryan, Rubio and the Bush family all told us this was great and that the working and middle class would just have to get used to a globalist worldview.

And cultural issues like Kaerpernick disrespecting America and the National Anthem would have previously been sold to the American public as a sign that there’s a problem with average people in the country, not a problem with the elite of the country. We would have been sold on the idea that, well, he’s using his freedom of speech, so that’s good, right? We would have been told that we should be more like the UK, more like France, more like Sweden, where multiculturalism runs deep, destroying all signs of their once great national identities.

We would have been told all of that, until Trump.

Interested in more national news? We've got you covered! See More National News
Previous Article As 10,000 Syrian Refugees Enter US This Week, Here’s A Look At Which States They’re Being Resettled In
Next Article The Red Bayou Show, Episode 57 – Featuring LSU GAME WEEK With T-Bob Hebert