“For every action, there is an equal and opposite reaction.”

So yesterday, Hillary Clinton came out of her pills-and-vodka burrow to give a speech about Donald Trump and how he’s a racist poopyhead, and how Trump is a paragon of the spooky and dangerous “alt-right” rather than an actual conservative.

It was one of the more cynical efforts in recent American political history, and it might well pay off for her. After all, there is little question but that Trump is nobody’s conservative, and it’s pretty clear that Trump has made it easy for others to paint him as racist in front of voters who are black, Hispanic, Middle Eastern or East Asian – particularly given the stilted and intellectually bankrupt state of the current media culture, when Ellen DeGeneres can be called a racist for tweeting out a joke meme suggesting the efficacy of hopping on Usain Bolt’s back for transportation purposes.

And Hillary’s people no doubt recognize that there is a large reservoir of committed conservatives who simply cannot bring themselves to support Trump, which presents her with an opportunity to drive a wedge through the Republican Party and, if not actually attract any of those people as voters (there are some neoconservative types inside the Beltway who have held themselves out as Conservatives For Hillary, but not many and those will certainly pay a heavy price in credibility after this election cycle) then at least drive them into voting for Gary Johnson, Darrell Castle or Evan McMullin.

Plus, Hillary’s camp probably felt that trashing Trump as a racist – disregarding the irony that the Clintons and their pals in the Democrat Party have trashed every Republican as a racist well before she was in adult diapers, including those good conservatives she’s now lauding for their kindly spirit – was necessary since for the last week Trump has been pointing out the abject failure of the Democrat Party to deliver any improvement to the lives of black people in America and asking black voters what they have to lose by voting for him.

So we got that speech yesterday.

Your author is frankly exhausted and disgusted with the presidential race and, as I’ve written here more than once, convinced that no matter who gets elected in November America is screwed, and the only way to “win” this election is to hold an Article V convention for the purpose of passing a series of constitutional amendments draining as much power out of Washington as possible. Since we’re going to have a disastrously awful president it’s crucial to make him or her as inconsequential to American life as possible, and that goes for the Supreme Court that president will pack with goons and minions as well.

So instead, for the rest of this segment I want to talk about the alt-right that Hillary all of a sudden wants to describe for the world and tar Trump with membership in.

First of all, it needs to be understood that Trump isn’t an alt-right candidate. Trump isn’t much of anybody’s candidate but Trump’s. He proved that this week when he backtracked on the most fundamental tenet of his campaign, namely that he was going to send all the illegals home while he built the wall. The major critique the conservative movement has had about Trump from the start is that he’s a fraud and nothing he’s said is backed by principle or conviction, and in fact the man’s history shows all he’s ever been is a bombastic New York liberal who just wants attention and friendship from the right people.

That can no longer be argued. Ascribing membership for Trump into any philosophical camp is giving him far too much credit.

The alt-right website American Renaissance put out a press release in response to Clinton’s speech which, while giving one a queasy stomach, was actually fairly cogent and came off a lot more honest in its statement of belief than Hillary’s speech did… 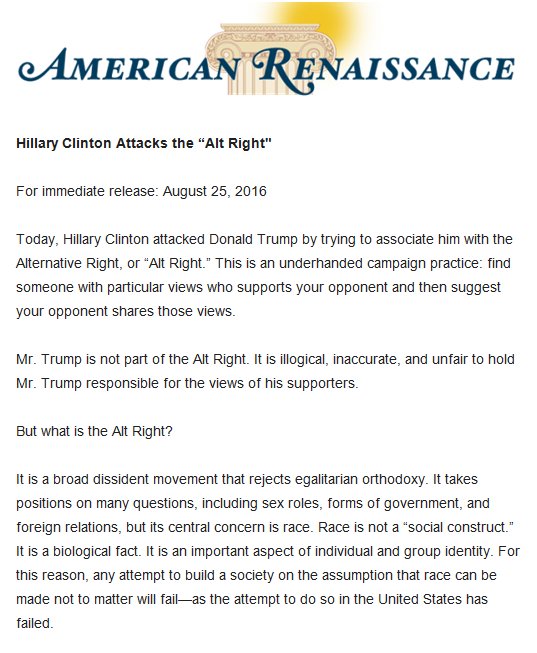 First, American Renaissance is correct that you can’t hold Trump responsible for the views of those who support him. If that was true, Hillary would have a pretty big problem given the downright disgusting views so many of her supporters hold. What’s more, if you’re Hillary you’re on pretty thin ice trashing Trump for pandering to the alt-right when you spend every single day doing the same thing to the Black Lives Matter crowd, which is as fact-averse and openly racist a crew as has held the stage in American politics since the Ku Klux Klan was the paramilitary wing of the Democrat Party back in the day.

Which is not to defend the American Renaissance gang’s views on race and its role in politics. What one can do is thank them for at least offering an honest recitation of their beliefs.

And it’s crucial to understand those beliefs, particularly if you have the suspicion, as we do, that this movement isn’t going away.

Start with the last sentence of the above – “any attempt to build a society on the assumption that race can be made not to matter will fail-as the attempt to do so in the United States has failed.” That’s a pretty depressing worldview, but you need to recognize it for what it is. It’s a reaction to decades of indoctrination by the Left in academia and elsewhere along the lines of Critical Race Theory and other rhetorical poisons. Critical Race Theory holds that whites are inherently racist even if they don’t have a milligram of malice in their hearts, because whites benefit from an inherently racist system. And from this idea flows a massive parade of horribles you see playing out on college campuses and elsewhere. 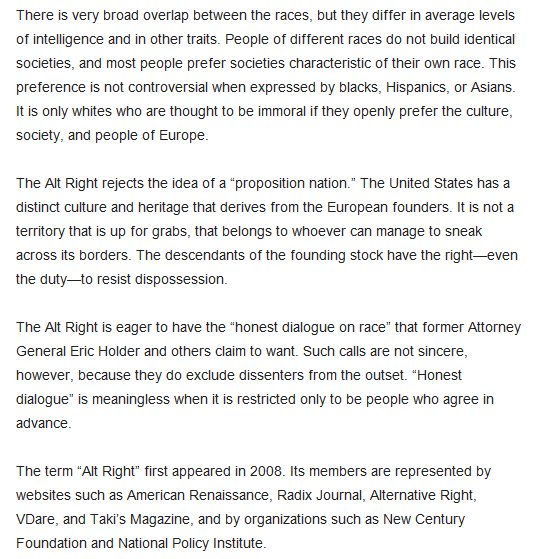 We’re not asking you to agree with this, just to understand it. What’s being said here is that Critical Race Theory is essentially correct, in that the American system is inherently hostile to people who are not white, but that the responsibility for that proposition falls on the non-white people who can’t cut it in this society.

And that there ought to be less non-white people, with less influence, in America as a result.

Again, you don’t have to agree with that. I don’t agree with it. I look at this and I don’t see any real evidence that it’s the enlightened Western civilization America was based on being represented in it. My reaction to it is something Ron Paul, of all people, once said – “racism is collectivism.” Occasionally Ron Paul is lucid, and that might have been the most lucid thing he ever said.

The way I view Western Civilization, its entire basis comes out of the concept, present in other cultures but emphasized in the West and specifically in the Enlightenment thinking which spawned the United States of America, of individual agency. That your actions control your outcomes. That you can change your stars, and be whomever you want to be. That’s a Christian concept; the whole construct of the Golden Rule, and the interview with St. Peter at the Pearly Gates where you’ve got to defend the record of your life as you try to reach heaven, is fundamental to who we are as free people in America and in the West as a whole. It’s only within that concept that individual freedom truly works, and with the weakening of the Christian ethic in this country you see less and less commitment to the idea of individual freedom.

The Democrat party, decades ago, abandoned the idea that it would defend the American ideal but take the part of the little guy. Instead it embraced what James Piereson called Punitive Liberalism, a noxious cloud of retributive policies and dogmas holding that America was a racist, sexist and homophobic country and seeking to restrict the baser impulses of our terrible society through government control – redistribution of wealth on a large scale, radicalized education curricula, political correctness, a never-ending string of cultural aggression, non-stop Alinskyite activism in safe Democrat constituencies and so on. The Hard Left took over the Democrat Party, and ultimately it produced Barack Obama as president.

And once the Obama era commenced, we’ve seen a full-on assault on traditional America.

Traditional Reaganite conservatism, which contains a package of policy preferences and three-legged-stool philosophical bases but is also marked by the exhortation to be a “happy warrior” and reject the characterization of political opponents as enemies, simply can’t hold its own against the Hard Left and their dirty tricks. That’s why more than a dozen fairly well-qualified Republican presidential candidates, any one of whom would be clobbering Hillary Clinton in the polls, couldn’t capture the imagination of the Right in this cycle; old-fashioned Republicanism doesn’t seem tough enough to arrest the decline.

Instead it’s Trump, who is not alt-right so much as he is bombastic. And that’s what the alt-right wants.

They’re a reaction. They’re the Right’s answer to the Hard Left. And they were inevitable. Tell white people they’re racist whether they realize it or not for long enough, and impose some of the same economic pressures and social pathologies on white people that your policies have imposed on minorities for long enough, and you will get the exact same attitudes of grievance and victimization among whites that La Raza and Black Lives Matter exploit among Hispanics and blacks.

In other words, Hillary really needs to shut her fat mouth about Trump and his racism – because when it comes to exploiting people based on skin color and creating division, she and her party wrote the book. And it’s not deep-seated Republican racism the alt-right feeds on, it’s cultural and political aggression from the Left.

– We’re long for today’s Battlefield, so how about a Today’s Last Thing before you go?

Today we have a guy playing a Chapman Stick.

You don’t know what a Chapman Stick is? Well, it’s like a guitar on steroids – and in the hands of somebody who really knows how to play one, it might just be the greatest musical instrument ever.

For example, here’s Bob Culbertson, one of the recognized masters of the instrument, shredding out a rendition of Bach’s Toccata and Fugue in D Minor…

And here’s Culbertson using it for a different purpose; namely, The Beatles’ Eleanor Rigby…

Interested in more national news? We've got you covered! See More National News
Previous Article State Appeals Court Rules That Freedom Of The Press Still Applies In Terrebonne Parish
Next Article Jonathan Perry Must Be The Dumbest Lawyer In Louisiana Because The Cajun Navy Already Has Immunity