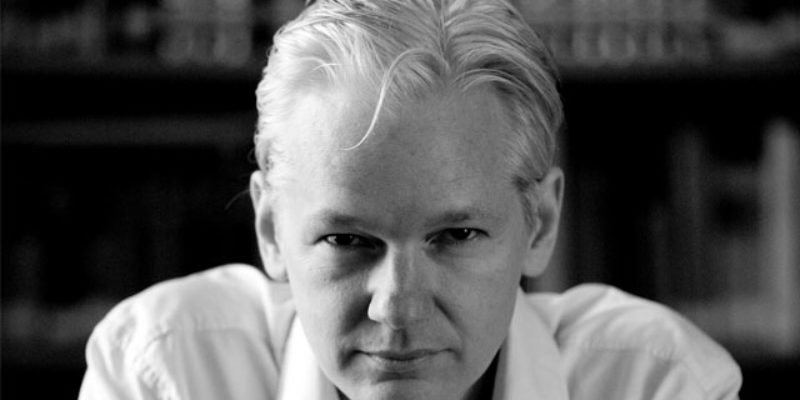 Watch this for yourself and decide…

You can conclude that Assange is full of hot air here, and dismiss this as a ruse both to get attention and to mask the true source of the material Wikileaks reeled in from the DNC’s e-mail server. The assumption, or accusation if you prefer, had been made that the DNC e-mails were released as a result of a hack by Russian intelligence; Assange issued a denial of that accusation by saying there was “no proof whatsoever” that the Russians had hacked the Democrats’ server.

But in this clip, Assange doesn’t come right out and name Rich, the DNC staffer found murdered in Washington back in July during what was termed to be a “robbery” in initial media reports despite his having been shot in the back and the fact his wallet was found on his person, as Wikileaks’ source – but as intimations go this is pretty ham-handed.

ANNOUNCE: WikiLeaks has decided to issue a US$20k reward for information leading to conviction for the murder of DNC staffer Seth Rich.

That reward offer could well be a nice promotional move and not necessarily an admission there is a connection between Rich and the dumping of those e-mails, but it certainly seems that Assange is hinting that Rich was his man inside the DNC.

But Assange says that Wikileaks’ sources are anonymous, which establishes a policy that would “prevent” him from proving that Rich was the source.

And if Assange can’t prove it, he doesn’t have the ability to move forward something which has lurked under the surface floating behind the Clintons for going on three decades now; namely, all of the corpses of people connected with them trailing back all the way to Arkansas.

Clinton conspiracy theorists have been counting those corpses for a long time and have the total above 40 at this point, and in some cases there have indeed been stories worthy at least of some suspicion that more than coincidence was at work. Vincent Foster, the lawyer and close friend of Hillary Clinton’s during Bill Clinton’s first term in office who turned up dead in a park under highly suspicious circumstances, was perhaps the most famous. But there has been a recent spate of unexplained deaths involving Democrat political operatives in positions whereby the potential for inconvenience to the Clintons was conceivable; Rich was only one of six such deaths since April.

Meaning that if Assange were able to prove that Rich had leaked the DNC e-mails to Wikileaks his death would have to be viewed as at least a possible retaliation, or at least an attempt at intimidation of others to dissuade future embarrassing disclosures.

And given the spate of recent deaths of people in position to make Hillary Clinton’s election more difficult, plus the pattern the conspiracy theorists have been touting going all the way back to Arkansas, if Assange were to prove Rich was Wikileaks’ source then those deaths might stop becoming a parlor-game curiosity and could become an actual campaign issue.

Bill used to laugh off questions about the dead. Hillary is less practiced in such denials. Rightly or wrongly, perhaps we should stop dismissing the conspiracy kooks this time.