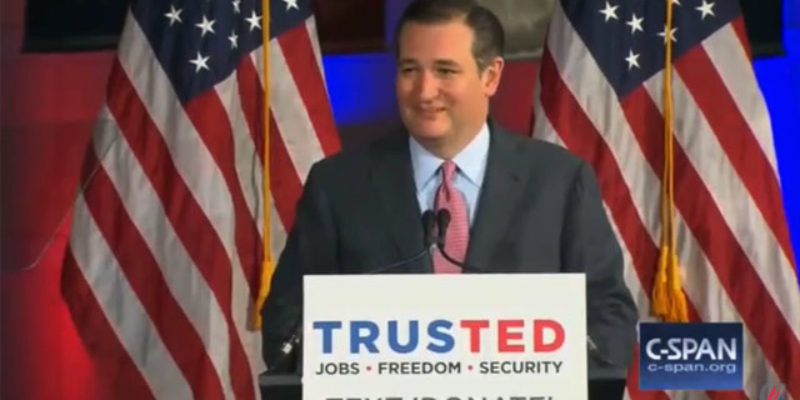 Two months after encouraging Republicans to “vote your conscience this November” at the GOP national convention Ted Cruz spelled it out in social media posts over the weekend that he will be casting a ballot for his primary rival Donald Trump.

Though Cruz signed a pledge to back whoever won the party nomination, Trump’s unprecedented personal attacks on a fellow candidate’s family delayed what Is ordinarily a pro forma act by a losing candidate in party presidential primary.  But there’s little about 2016 that has been standard.

And while Trump engaged in name calling with many of his fellow Republican aspirants, the real estate developer crossed a line that provided the constitutionalist conservative with an honorable way out of that agreement.

Had Cruz simply went radio silent after suspending his campaign after the Indiana primary and waited for what was the right time to issue the inevitable endorsement, nobody could’ve blamed him, including this Cruz supporter.

But Cruz chose to go to Cleveland, and we all know how that played out,

As the role of national conventions had transformed from their beginnings as truly deliberative bodies to that of prolonged unity rallies, Cruz’s lack of an endorsement there seemed so out of place while also setting a bar of determined opposition to Trump that he could not afford to maintain.

Being a young man whose political career is (potentially) more ahead of him than behind him, Cruz had to consider realities that an aged Jeb Bush or John Kasich do not.

While not trotted out with the same fanfare as Bernie Sanders’s endorsement of Hillary Clinton, having Cruz on board is a major net positive for Trump.

First, it helps grease the skids for many anti-Trump conservative voters to start accepting the reality that a vote for anyone but the Republican presidential nominee is by default a vote for Clinton.  If Cruz, who received the worst out of Trump, can go with him, what’s everyone else’s excuse?

Secondly, by releasing the statement prior to the debate, Cruz has potentially neutralized an attack point in the first debate about Trump’s inability to bring the party together around his candidacy.

Not having the second place finisher in your corner, particularly in contrast with the Democrats, would have nagged the GOP ticket throughout the balance of the general election campaign.

Third, it might finally get some of the conservative blogosphere to at least stop savaging Trump and at a minimum focus their fire on Clinton.  As some have made attacking Trump their niche business and have professional and financial incentives to keep up their shtick, those writers who are more sincere in their politics could start to ease up.

Of course there’s also a degree of benefit for Cruz for signaling his support for the presidential nominee.

First, Cruz doubtlessly intends to run for the White House again, in either 2020 or thereafter.  While perhaps justified in initially reneging on the pledge, four or more years from now more people are going to remember Cruz’s failure to live up to his word than the unflattering picture of Heidi Cruz that Trump tweeted out.

Furthermore if the RNC follows through on some form of sanctioning of candidates who did not follow through on the unity pledge, that could keep Cruz out of debate, which the party has the power to do, and thus effectively out of the race.

But Cruz may have some more immediate concerns.

Not long after Cleveland, talk about a primary challenger surfaced, directly aided and abetted by Trump.

Being two years removed from reelection, Cruz has plenty of time to prepare for an intra party fight, if not dissuade a significant challenge through his trademark aggressive fundraising.

And his disastrous convention appearance will have been somewhat mitigated by the tardy endorsement of Trump.

Cruz badly misplayed his drawn out support for Trump, having antagonized the billionaire’s substantial following in the Lone Star State at the convention while disappointing the hard core conservative #NeverTrump folks with his announcement.

Many of Cruz’s hard core supporters are not following their candidate’s lead in lining up behind Trump, with more than a few citing the smearing of Cruz and his family.

But as one pro-Cruz Super PAC consultant said, it’s up to the Cruzes to forgive those slights (as Cruz himself has shared) and not the team.

At a minimum, if Trump is defeated in the election, there will now be one less high profile Republican to be made into a scapegoat.

Interested in more national news? We've got you covered! See More National News
Previous Article There Are Lots Of Things You Can Say About Miles’ Firing, But “It’s Not Fair” Isn’t One Of Them
Next Article So Is LSU’s Next Head Football Coach Going To Be Tom Herman? Our List Of Potential Candidates