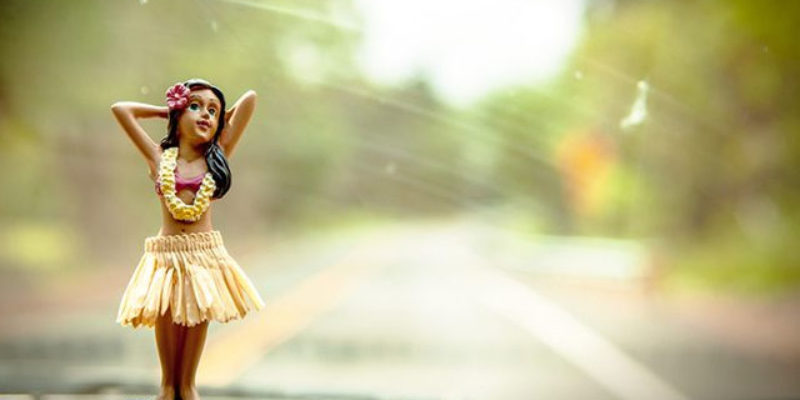 The video is pretty self-explanatory, but we’ll offer a little bit of an introduction. It’s been uploaded to YouTube by conservative commentator Laura Southern, who had it sent to her via e-mail, rather than the woman who shot it – apparently her name is Annaliese Nielsen. Nielsen, the protagonist in this fiasco, is a leftist nut who runs a Los Angeles-based online Mean Girls club called Girls’ Night In, which celebrates its members provoking the general public through feminist crybullying and other theatrics. And in the video she gets a ride from a Lyft driver (for those of you not aware, Lyft is a ridesharing app a lot like Uber) and then proceeds to berate him over the fact he has a bobblehead doll of a Hawaiian hula dancer on his dashboard.

It seems that’s a cultural appropriation of Hawaiian culture and it’s offensive to native Hawaiian people.

Annaliese Nielsen isn’t Hawaiian, though she does have tattoos that might impress some Hawaiians. She takes offense as an unelected representative of Hawaiians and proceeds to spend several minutes irritating the driver until he decides he’s had enough and dumps her out of the car.

Apparently Nielsen complained to Lyft and got the driver fired – for about a day. Once Southern’s video went up and the management at Lyft saw what had happened, the driver was reinstated.

What’s fun about ridesharing apps like Uber and Lyft is that not only do drivers get rated, but passengers do as well. That likely means Annaliese Nielsen will have a hell of a time getting a Lyft ride going forward; she’s screwed herself.

And the consequences didn’t end there, because after Southern blasted the video out into cyberspace, Annaliese Nielsen has had a sizable backlash hit her in the face. She ended up dumping her Twitter account and posted this on Facebook (the language isn’t the best; our apologies)… 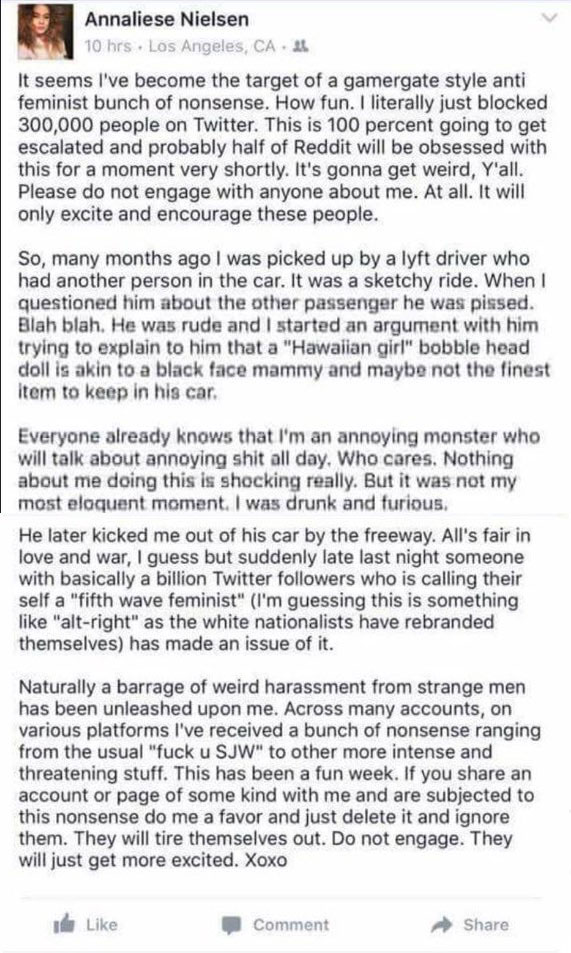 Of course on the video the driver was anything but rude. He actually put up with a sizable torrent of abuse from this insane harpy without ever raising his voice or offering insults of his own. What he didn’t do was to accede to her ridiculous demand that he remove a dashboard ornament no lucid person would find offensive in his own vehicle, and then when she became vitriolic enough that no reasonable person would tolerate her in his car, he put her out along the side of the road.

For businesses, this should be a textbook response to social justice warriors, from the bottom rung to the top. The message that we will not be intimidated or threatened would go a long way to making sure these kinds of people aren’t being encouraged to behave this way.

For many corporations, this may be a scary step to take at first. Public relations is almost everything to a corporation, but the signs telling you whether or not your company is being bullied are easy to spot. The complaints usually revolve around some sort of political, racial, or identity issue. If suspicious that you’ve been targeted by an SJW, you can easily go online and find them. Trust me, they always have some sort of presence. They can’t resist virtue signaling.

From there, you can pretty easily determine whether to refuse to take the suggested action – there’s always one of those too – or not. This will of course lead to the scary part of the SJW attempting to rally an online mob directed at your company. You will receive tweets, emails, and possibly articles written about you from various outlets.

Let it happen. In fact, hope it happens. That’s free press and attention for your business. It may look negative, but it’s important to remember that the result of this will be a net positive if you stay the course.

The reason being is that SJWs can’t raise a stink without forcing others to smell it. It’s how they gather their mob. The good news is that it also attracts their opposites. Usually anti-SJW activists and social media users who continually disprove their narratives. Aside from the demeanor of some of their louder members, these are the good guys who end up turning your negative press into something great.

A good example here is when Memories Pizza was attacked by hordes of SJWs, and LGBT activists. Things looked really bad until word got out to the good guys, specifically Lawrence Jones, who raised over $840,000 for their troubles. You may not be as monetarily lucky as the family who owned the pizzeria, but you will gain the respect of the public for your troubles in some way, shape, or form.

And in the end, that’s the real goal here. Your concern for public relations will pay off in the end, because when the dust settles, you’ll find that the online mob that came after you is nothing but a minority of people who are very, very loud. Your real customers, and the majority of the public who think this childish activism is ridiculous, will actively want to give you business for your stalwartness. What’s more, it’s likely that most of the SJWs have never used your business, and will never afterward whether you capitulate to them or not. You won’t really be losing much, if anything, by denying their demands.

The SJWs will eventually give up and go away, but your customers will remember this for a long time.

Morse notes that this phenomenon of harassment has been somewhat successful so far because too many businesses panic and accede to the demands of the crybullies. Business owners and employees are taught to operate under the maxim that “the customer is always right,” but that’s a prescription for disaster.

For a number of reasons. First, Annaliese Nielsen was not a “customer” of this Lyft driver. Customers of a ride-sharing service sit in the passenger seat and allow the driver to take them to their destinations. She was his tormentor, rather than his customer, and actually interfered with his attempts to provide a service not just to her but to the other passenger in his car – and the other passenger is on that video complaining that Nielsen was disturbing the experience she was paying for. When you make yourself an adversary rather than a customer and when you make threats about destroying someone’s business, if not their life – she threatened to publish that video on Gawker, which is amusing since Gawker is as kaput as Nielsen’s Twitter account at this point – that someone is no longer obligated to treat you as anything but an adversary.

And second, “the customer is always right” is an antiquated concept arising from a time in which Americans assumed shared values among the public and there could be trust than anyone walking through the doors of one’s place of business would conform to those values. That time has clearly passed; 30-40 years ago an Annaliese Nielsen would be completely unheard of, and it would be only a matter of time before someone would move to have her committed to a mental institution. The kind of behavior on that video simply wouldn’t be tolerated. Knowing that, the assumptions making “the customer is always right” were safe ones. But we don’t have that now; instead we have a society where lunatics are running amok and being encouraged by networks of other lunatics supporting and publicizing each other online. That means it isn’t safe for a business, confronted with social justice warriors like an Annaliese Nielsen, to take a “the customer is always right” stance; you will run off your actual customers by attempting to accommodate the fake ones, and you will never satisfy the fake ones.

The only way to handle these people once they’re identified is to explain to them their behavior is unacceptable, their concerns are invalidated by that behavior and will therefore not be examined or satisfied and that because of their behavior you will not do business with them. And to put them to the curb. As Morse notes, the backlash the SJW crowd will generate will be fierce, but very temporary, and the response will prove to you how few the SJW’s actually are.

When enough companies adopt such practices, we will not have crybully activism like this – because the SJW’s will have no choice to admit it doesn’t work anymore.

Interested in more national news? We've got you covered! See More National News
Previous Article Of the 10,000 Syrian Refugees Obama Just Admitted Into The Country, Only 0.47 Percent Are Christians
Next Article The Low Popahirum, September 1, 2016