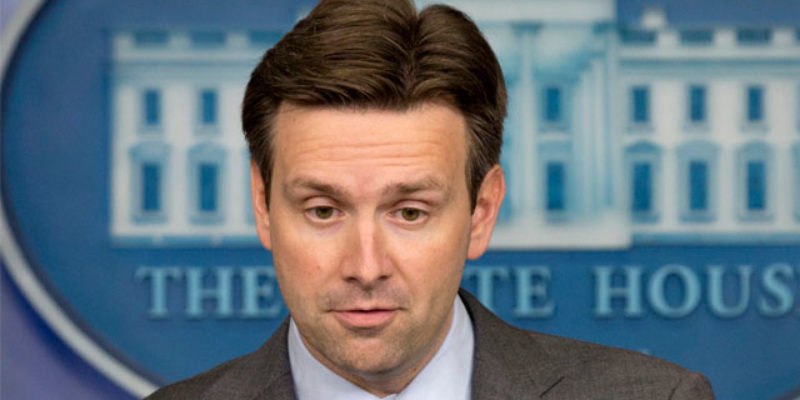 Last night my latest American Spectator column went up, and it focuses on the loopy line cooked up by White House media flack Josh Earnest that we are engaged in a “narrative war” with ISIS, which Earnest thinks is now in stark relief after the weekend’s spate of terrorism in Minnesota and the New York area.

Earnest’s exact quote was this…

“When it comes to ISIL, we are in a fight, a narrative fight with them, a narrative battle, and what ISIL wants to do is they want to project that they are an organization that is representing Islam in a fight and a war against the West, and a war against the United States,” he said on CNN’s New Day. “That is a bankrupt, false narrative. It’s a mythology, and we have made progress in debunking that mythology.”

He’s right about one thing, which is that ISIS without question believes they’re the representative of Islam in a civilizational fight against the West. That’s what a caliphate is; a Muslim caliphate’s role is to lead the jihad against the infidels until there are no more lands outside of the Dar-al-Islam. Which is why ISIS, which compared to previous Muslim caliphates through history is exceptionally fledgling and weak, is much busier inspiring lone-wolf terrorists in the West than making any real military progress in expanding their holdings in Syria and Iraq.

But Earnest’s characterization of ISIS’ “narrative” as bankrupt and false is just a flat-out lie. If it was bankrupt and false, Dahir Adan would not have given his life to stab nine innocents in that mall in St. Cloud, and Ahmad Khan Ramani wouldn’t have planted bombs all over New Jersey and Manhattan in an attempt to kill unbelievers over a weekend.

The lone wolves who are multiplying here and elsewhere in the West are by and large stupid, socially awkward, emotionally and physically unattractive, poorly assimilated losers who come from failed cultures alien and hostile to America. They never should have been brought here, and when we’re forced to examine their biographies after their disassociation with America goes violent that fact becomes more and more obvious.

That said, they actually do believe in something – unlike the Pajama Boys and social-justice crybullies populating our governing class, who waste breath bloviating about “narratives” and “optics.” What will Josh Earnest, or Sally Kohn, or Donna Brazile, give their lives for? What do they believe that strongly?

And just like it’s obvious that there are sharia mosques all over this country manufacturing monsters for the jihad right under our noses.

The American people understand this threat, even if they can’t write a master’s thesis on militant Islam. They see that there are people who hate us for our way of life, and they recognize that sometimes it’s necessary to take action to deal with the threat those people pose.

And what they see is our leaders and the political class which foists them on us hasn’t the slightest bit of interest in doing the obvious things to deal with the obvious threats. They see the idiot governor of Minnesota, Mark Dayton, warning the people of St. Cloud not to offer reprisals to the mass of unassimilated Somalis from which Dahir Adan came. They see the bumbling imbecile Bill DeBlasio deny to the last that Ramani’s bombs represented jihad. They see a drug-addled Hillary Clinton attack Trump for correctly pointing the finger at Muslim terror when it was manifest that was the cause of the weekend’s violence.

And they see Earnest with his stupid Aaron Sorkin wannabe talk about “narrative wars,” when what we’re in is a real war against an enemy real American leadership could wipe off the face of the earth without much trouble.

So how do those two events, or classes of events if you prefer, connect? You should have guessed by now. The public isn’t as stupid as the media thinks it is, and it’s getting very tired of the lectures and lies of the political class. Americans knew long before Chelsea and St. Cloud that Muslim terrorists are multiplying in our midst thanks to a nonexistent commitment by our leadership to stop the threat, and Americans are beyond tired of being told by politicians not to jump to obvious conclusions when Muslim terrorists surface and worse, to be lectured not to engage in reprisals which have never been at issue.

So when Hillary Clinton, after St. Cloud and Chelsea, doubles down on her accusation that Trump is ISIS’ best friend because somehow his tough talk about terrorism will stoke a war ISIS is already engaged in with us, don’t be surprised to see even more polls like the ones in New Mexico. Earnest might like his cute idea of a “narrative war”; the adults on both sides of this civilizational conflict recognize it for something a bit more kinetic and high-stakes than that.

Our betters in politics and media might not get it, but ordinary Americans do: there might be lots of Muslims who just want to come here and live as decent Americans and nobody begrudges their presence at all, but Islamists and jihadists aren’t acceptable. Further, it’s long past time we stopped letting them in. Or in the case of Rahami, perhaps considering running him off once it’s obvious he’s turned against his country — or, as in the case of Mateen, at least following him around a little when he spits out warning signs left and right.

Trump, for all his goofy statements and over-the-top bombast at times, at least sees the obvious. Clinton, for all her supposed sophistication, looks too medicated and compromised to have a clue. The public is beginning to act accordingly.

I wondered yesterday on Facebook whether Ramani’s bombs count as an in-kind donation to Trump. They essentially do. It isn’t that Trump offers anything special to the American people. He’s rising in the polls because he’s not a member of the political class, and the American people have flat-out had it with the lies and the lectures from our betters.

Interested in more national news? We've got you covered! See More National News
Previous Article BAYHAM: A Few Questions For Mike Detillier
Next Article Speaking Of Narratives, How’d Hillary Do Last Night With The One That Says She’s A Bitch?